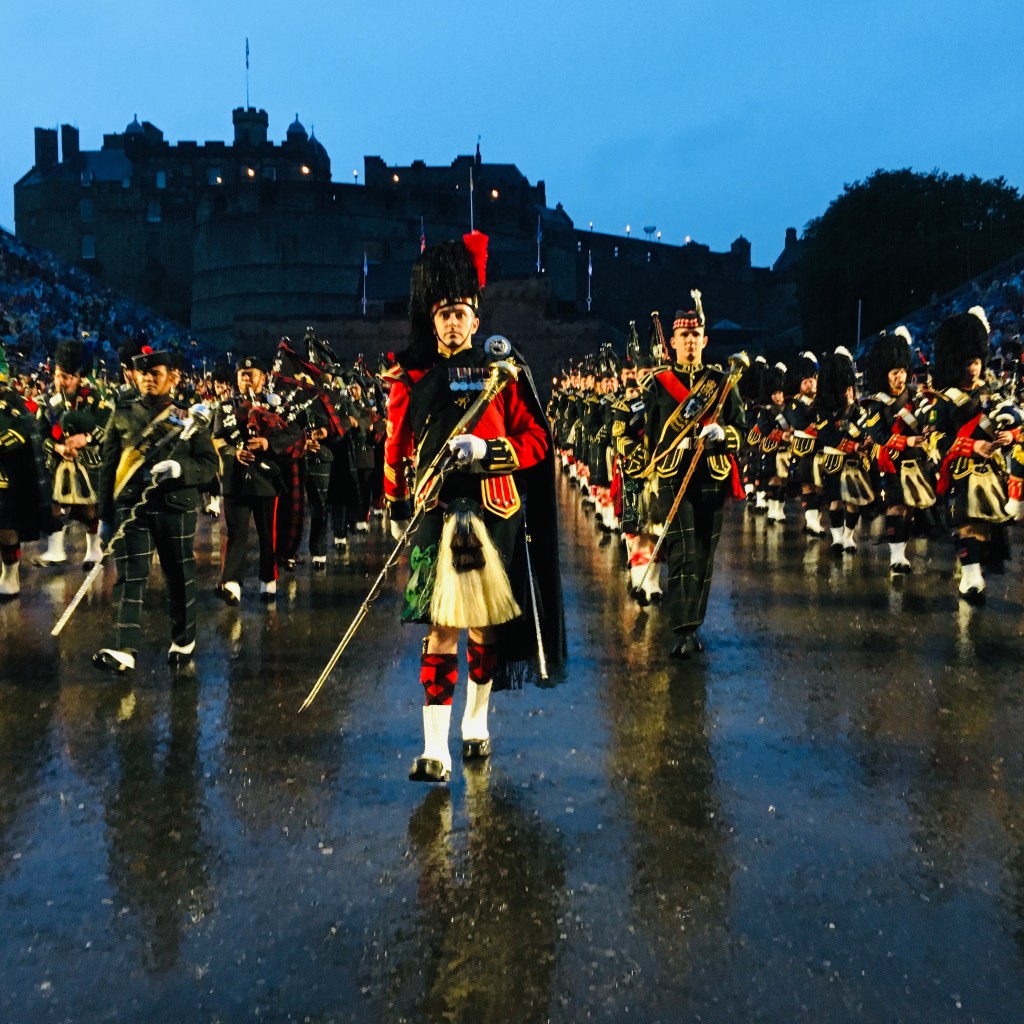 Every August Edinburgh hosts the granddaddy of Fringe Festivals; this has been going on since 1947 and 2019 offers, from August 2-26,  theater, music, dance, comedy— lots and lots of comedy—circus acts, puppets, cabaret and buskers on the street. There are nearly 4000 shows in more than 300 venues, remarkably well organized. Crowds of people speaking every language walk The Royal Mile. Some are in costume, some are in clothes., and sometimes you can’t tell the difference.There are posters everywhere and cheerful people hand you flyers for their shows with a smile and thanks. There is the Fringe Festival and the vetted International Festival.

The spectacle that more than 8000 people buy tickets for every night is the famous Royal Edinburgh Military Tattoo, often sitting in bleachers in the chilly rain.  There are massive formations of bagpipers and drummers, with various countries performing as guests of the nation, plus lots of hokey projections on the looming stone castle wall behind the brigades.

Adaptation seems to be the name of the game this year, especially in the International Festival, with adaptations from novel to stage (The Secret River), play to ballet (The Crucible) then to now (Peter Gynt and Oedipus), and in the Fringe there is the predictably transgressive, transgendered, and transgenred, although much of it seemed pretty tame.

With so much on offer, and only a week, I had to choose; here’s a sampling of what I saw:

PART 1: IN THE INTERNATIONAL FESTIVAL:

I’m not usually a fan of genre-jumping, but this ballet adaptation of Arthur Miller’s play, The Crucible, is not only brilliant—both in its choreography by Helen Pickett and in its performance—but it  adds a powerful layer of interpretation to this well-known and endlessly interpreted play.

Usually The Crucible is seen as a political allegory, a warning against tyranny; Miller wrote it as a response to the Communist “witch hunt” in the 1950s, literalizing “witch hunt”  with the real deal in the 17th century. It indicts organized religion as well, seeing the church elders are narrow-minded and self-righteous, so its relevance seems endlessly applicable, a play for all times.

The shift to ballet, away from Miller’s monumental speeches and away from plot implausibilities, brings with it a shift in theme. Dance is obviously about bodies; it makes art out of the flesh, defying the gravity and gracelessness that limits our own lumpish lives. And so The Crucible as a ballet shifts meaning; has become a cautionary tale about  the dangers of sexual repression.

Maiking wonderful use of bourree, the chorus of  girls, accusing and accused,  create a remarkable semblance of fear and trembling on pointe. The several  pas de deux are thrilling as are the solos when these exceptional performers dance ecstasy and agony, making the wildest of emotions visible and visceral.

The Secret River, Sydney Theatre Company.  (Transfers to the National Theatre in London on August 22)

Having read Kate Grenville’s engrossing novel about racism and the “settling” of 18th century Australia, I couldn’t imagine how it coud be adapted for the stage:  so much water, so much jungle, such silent people. And yet Andrew Bovell has created an exotic, if overlong, theatrical version of the book now a classic of Australian literature. The show’s relevance to the contemporary world—not just to Australia—is obvious; Grenville said it best: “Where those who came might have listened and learnt from those who were here, mght have found a way of living here on this land with respet and humility. Instead, enabled by gunpowder and fed by ignorance, greed and fear, a terrible choice was made. It is a choice that has shaped the present.”

The act of adaptation has stripped the novel of both its subtlety and language, rendering the moral lesson more blatant than it needs to be.

An epic of a show (nearly four hours long) stars the sensational James McArdle.  David Hare has written an updated version of Ibsen’s Peer Gynt and indicts the narcissism of the contemporary world, laying on the  sarcasm with a heavy hand.

In Act 1, Peter is a young man just home from the war, inventing his own heroism by fictionalizing the “narrative” of his life. “I will need a wife to decorate my legend.” He is, in the common parlance, a dickhead.

In Act 2, he is a successful Trumpian businessman—the scene is a Florida golf course—and his vast wealth comes from arms dealing and owning news media. A group of sycophants cheat him of his fortune.

Act 3 he is old, still suffering from the “sublime allure of self-realization”; he tries to talk his way out of death, peeling a literal  onion of selfhood only to discover there is no center.

The production is filled with amusing Magrittean sets.

Performed in French and Flemish with English supertitles, this production was created and directed by Milo Rau. Labelled a “stage documentary,” it’s a fascinating and disturbing recreation not only of a brutal, drunken homophobic murder, but also a reprise of the auditions for the actors to play the roles in the drama.  Layers upon layers, this is old-time meta with a vengeance. This show is housed in a grand old theater—all gilt and maroon draperies—adding to the shock.

PART 2: SOME OF WHAT I SAW IN THE FRINGE FESTIVAL

The original, student production of Six (coming to Broadway after winning five Olivier nominations) was staged by the Cambridge University Musical Theatre Society at the Fringe in 2017, and this year’s show, Rust, also staged by CUMTS is likely to have legs as well. It’s a gentle, touching musical about people in rehab for various addictions, and written by Helena Fox. The young actors are superb.

Out of the Blue is a boy band comprised of eleven undergraduates at Oxford University. Heartthrob material for the kind of adolescent boys and girls who spend most of their time studying, Out of the Blue’s voices are good but their moves are lame. I guess they’re all really smart.

Another adaptation, this is an hour-long rap about  Black Ulysses’s adventures. The passionate sweat-drenched performer whose name is not mentioned anywhere [Austin Dean Ashford —ed], provides an imaginative version of the African American polemic, suggesting that a black superhero has to be “so black, he’s purple.”

A stunning and courageous performance by writer Irene Kelleher as Dickens’ Miss Havesham, the jilted bride in Great Expectations. Kelleher has invented a backstory of profound derangement  to explain—in contemporary terms as an online presence— the five months this jilted heiress has not removed her now-filthy wedding dress. It is both sad and horrifying and an acting tour-de-force.

And so home again, ready of our own Fringe next month.

6 Replies to “Letter from Edinburgh: A dilettante at large reviews”