Allentown native, Alix Croop, couldn’t imagine how her talents would translate to what she had seen in Cirque du Soleil’s Alegria when the show played at her college campus. At the time, Croop was a retired competitive gymnast working on her master’s degree in Counseling Psychology. Fast forward a few years and Croop is now touring in her third Cirque show, AMALUNA. The story is inspired by Greek and Norse mythology and takes us on a journey to a mysterious island governed by Goddesses. Croop talks about her role as an Amazon and touring with the all-female cast.

The production comes to Oaks, Montgomery County, adjacent to the Greater Philadelphia Expo Center, from July 24 through August 25, 2019. 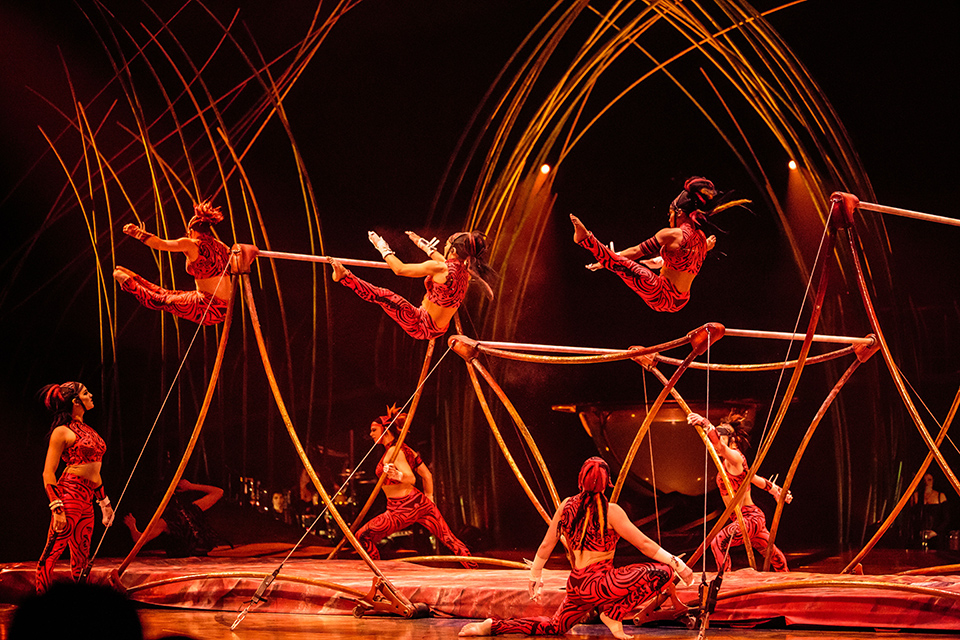 Debra Danese: How did you first get involved with Cirque du Soleil?

Alix Croop: I was coaching the gymnastics team at my Alma Mater (the University of Pittsburgh) and the head coach of a Cirque du Soleil show that was in town came into our practice. He was previously the coach of the Australian gymnastics team and remembered me from my years as a gymnast. He invited me to see the show, Alegria, which was playing at our arena on campus. I fell in love with the show, and he encouraged me to put an audition video together. I had just finished my gymnastics career six months before, and was keen to play around in the gym again. With the help of my assistant coach, Mike Rowe, we came in the gym a few days a week and got all of my skills and a dance improv on video. Once I submitted my video, I was added to the artist database. At the time, I didn’t understand if this was a good thing or not. I realized later that this meant the casting department would call me for any job openings that fit my skillset. I began receiving calls within a couple months. I was so thrilled anytime they would call me, but I was pursuing my masters at the time and wanted to finish what I had started. After graduating, I was able to take the calls more seriously and finally accepted a job in Las Vegas for my first Cirque du Soleil show, Viva Elvis. I left everything in Pittsburgh behind, and ran away with the circus! It was the best decision I ever made.

DD: What was your training and background prior to joining the company?

AC: Prior to joining Cirque, I was an artistic gymnast. I began at the age of five at Parkettes in Allentown, PA. I competed for Parkettes up until I began my NCAA career, competing for the University of Pittsburgh on a full athletic scholarship. My gymnastics skills gave me the base I needed for the acts I was being considered for in Cirque.

DD: What type of act are you performing in AMALUNA?

AC: I’m currently performing in a group uneven bar act, as an Amazon. Our group is made up of nine women, all former high-level gymnasts. We perform release moves and dismounts learned during our competitive gymnastics years, as well as, synchronized sequences and new skills created specifically for this act.

AC: A typical day on tour varies depending on if we have one or two shows that day. On a one show day, I’ll usually wake up between 11:00-Noon and head to work around 1:00 or 2:00 pm. I will have uneven bars training for at least an hour, and then I’ll train cerceau (aerial hoop) for about an hour. Somewhere in between, I’ll grab some food at our kitchen on site. We usually have a half hour meeting to talk about any updates or show notes. Then I’ll start my make up about 2 1/2 hours before the show begins. It takes me around 1 1/2 hours to do my make -up. One hour before the show, we have an Amazon meeting to go over the version of the act that we will perform that night. We all offer different skills, so the line-up changes day to day to highlight all the various skills that everyone can perform. After that meeting, I put the finishing touches on my make- up, put my headpiece and costume on, and I’m ready to go on stage! The show will usually finish a little after 10:00 pm, which means I get home after 11:00 pm. By the time I eat, shower, and wind down, I don’t get into bed until after 2:00 am most nights. That might seem quite late to most people, but it’s hard to come down from the adrenaline rush after the show. So that’s when I feel most productive and catch up with emails, research, trip planning, etc. This also explains why I wake up so late.

DD: The cast of AMALUNA is comprised mostly of women.  Does this bring a different energy on and offstage compared to a mixed cast?

AC: I’ve been on three Cirque shows now, and each show has a completely different dynamic and atmosphere on and off stage. I was a little nervous coming to AMALUNA for an all-female group act. But the girls were so cool and welcoming when I arrived. We have such a great bond within our group. In general, we’re a pretty easy-going group, with a silly side. We share fun moments on stage during our act, and off stage away from work. It’s a great environment to work in.

DD: What is your favorite part of working in AMALUNA?

AC: My favorite part about working on AMALUNA is the music in our show. I love every song. Our musicians are so talented. It’s inspiring! I love watching them play and sing. They bring such a strong energy and presence to our stage. What’s cooler than an all-female band rocking out?