“…there’s a dog already biting,—’s conscience.” ~ Dog in The Witch of Edmonton 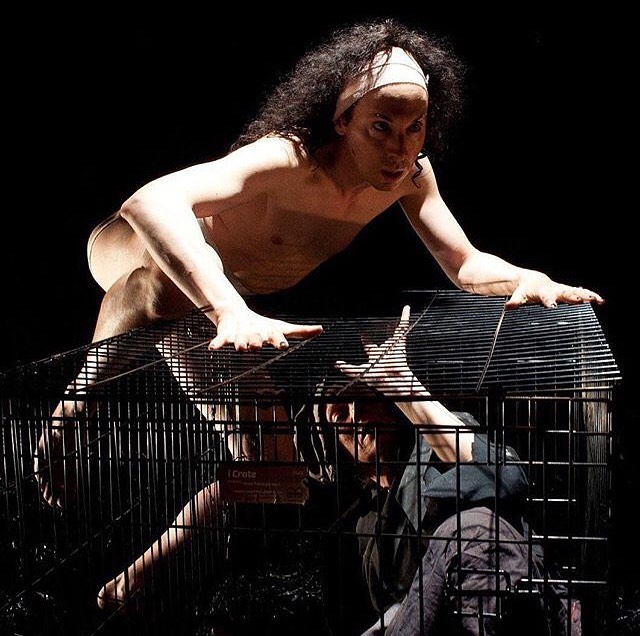 REV Theatre kicks up the heat in the 17th century THE WITCH OF EDMONTON; a play based on an actual witch trial. Director Rosemary Hay and Rudy Caporaso have resurrected this long-lived classic originally written by William Rowley, Thomas Dekker and John Ford in 1621 with extra sauce, substance and spectacle. Subplots abound within the ambient cemetery setting at historic Laurel Hill. Murder, bigamy, salacity, lunacy and more interspersed with music, entertaining choreography (Rudy Caporaso) and audience interaction bring new life to this torrid tale.

Elizabeth Sawyer (Susan Moses), a societal outcast, scorned and scolded by all wishes with all her soul to the devil for revenge, which is offered by the Devil (Rudy Caporaso) in the guise of a corset donned dog. And oh he is doggone wicked – howling, dancing and singing having his way! Meanwhile young Frank Thorney (Paul Harold), who is already married in secret, is pushed by responsibility to cover his father’s debts to marry another woman setting off a cascade of woe, which unearths more grief, and deceit from which no one seems safe. But never fear, angst will be replaced by a sense of otherworldliness as lighting changes, music ensues and the devil dog makes his way to the stage to crank up the mayhem.

Rudy Caporaso, also the productions choreographer and set/costume designer, delivers one hek of a performance as Dog, not only in his wonderfully outrageous musical numbers, but by the genuine ‘devil may care’ manner he accords his character, whether biting, licking or tricking. Susan Moses is spellbinding as Elizabeth Sawyer in her physical demeanor and speech cadent with fury after years of maltreatment. Other outstanding performances were given by Emma Pillow as Jane, Marilyn McIntyre as sweet Susan, Paul Harold as Frank Thorney, Ellie Borzilleri as Anne, Stephen Gulick as Thorney, William Shipley as Warbeck, Lorenza Bernasconi as Katherine, David Hutchman as Carter, Gregory Power as Somerton, Joe Clark-Falcone as Sir Arthur and Nick Ware as Cuddy.

Birds caw in the background as the majority of the cast, dressed in severe black period clothing, remain staunchly seated on two opposing benches when not on stage, demarcating the central stage area. When the actors are called to drama by the script they create a luminous picture of juxtaposing repression and passion. Elizabeth Sawyer’s entrance as a homeless person is fabulously fitting. Lighting is also used to great effect in creating other stage spaces and realms within the play. Characters periodically come from different parts of the cemetery, traipsing between the tombstones as horror crosses with comedy, particularly when the ‘Dog’ is unleashed upon the scene.

REV’s adaptation of THE WITCH OF EDMONTON imbues the language used in Jacobean era play with fresh breath, incorporates contemporary dimensions, and has lots of surprises.