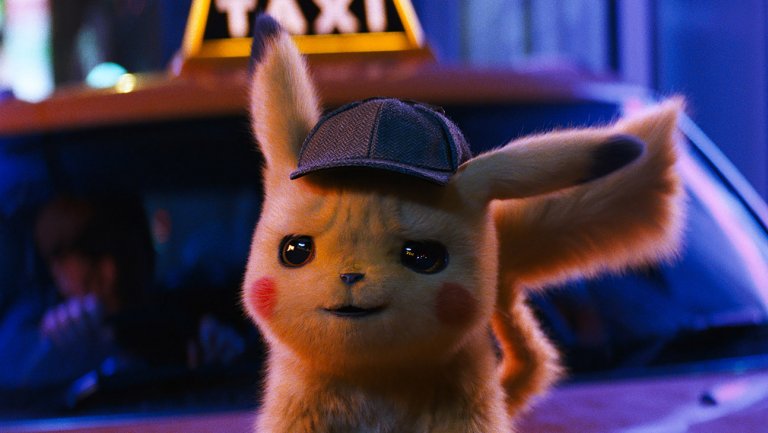 The colorful world of Pokémon: Detective Pikachu is one as filled with visual flair as it is with the dense mythology of the source material. Beautifully rendered and lovingly populated with countless cartoony monsters, it’s a world that can hold any number of engaging stories. If Detective Pikachu is a success, we can certainly expect future movies in this cash cow of a universe. I am looking forward to seeing what follows, because frankly, this inaugural trip into Ryme City doesn’t live up to the promise of the trailers.

What appeared to be a slick, fast moving adventure — one likely populated with enough light innuendo to please parents dragged to the multiplex by their young progeny — is a convoluted mess directed solely at very young children. Granted, it is somewhat unfair for me to go into a Pokémon movie expecting anything but kids stuff, but it’s not out of the question. In a world where Pixar regularly provides entertainment that defies age categorization, one can reasonably expect a Ryan Reynolds voiced creation to find the fine line where a gag can be above a child without being lost on them entirely. Yet here we are, watching a movie in which Pikachu, in reference to a poisonous gas says “Ix-nay on the gas-ay,” avoiding proper Pig Latin so as to not utter the phrase “ass-gay.” Rather than rewrite the line to literally any phrase of Reynolds-brand snark, the filmmakers instead left this clunky bit of dialogue as is.

If anything, this snafu is indicative of the film’s problems on the whole.

What I mean is that this is a film that seems as if it were tested and reworked countless times over in pre-production and then beaten into shape in post. This chunk of pretty brand management regularly chooses the most convoluted route to get the job done, and I sense this inclination is deep seated in its DNA. With so many masters to please, Detective Pikachu ends up being a confused, diluted product. Regardless, there is still plenty of fun to be had once you get your head on its level.

Justice Smith plays Tim Goodman, a former Pokémon trainer who has sworn off partnership with the titular pocket monsters much to the dismay of a world that has fully embraced them. Every human in Ryme City is paired with a Pokémon, and the two species live in harmony, due in part to the work of billionaire Howard Clifford (Bill Nighy), who founded Ryme City as a place where humans and Pokémon alike can thrive. After Tim’s father dies in a mysterious car accident while investigating a potentially world-shaking conspiracy, the awkward young man finds himself on a quest to find out what really happened. By his side is his father’s former partner, Detective Pikachu. There’s a catch: to the world, Pikachu makes your standard Poké-noises, but to Tim he’s a mouthy little chunk of attitude voiced by Ryan Reynolds. The two reluctantly team up, and wouldn’t you know it? They soon become good friends. Throw in a few action sequences and magic chemical which causes Pokémon to turn violent and you’ve got yourself a movie.

The comedic potential inherent to Tim’s ability to communicate with a Pokémon in English is wasted on two gags, one of which is seen in the trailer. Otherwise it doesn’t really come up. The comedic potential of an adorable (like, craaaazy adorable) Pokémon speaking with the voice of Deadpool is also squandered. In fact, the bulk of Pikachu’s dialogue is clearly done via ADR, which leads credence to the rumor that Reynolds was one of many actors considered for the role, and that he accepted it long after the effects for the film were completed.

These effects, however, are fantastic. Despite being cartoonish, digital creations, the Pokémon appear tangible. Short of a few moments where the actors struggle to emote opposite an invisible performer, the humans and Pokémon do seem to exist in the same filmic plane. Few CGI-reliant movies can make this claim, even when working with a tremendous budget. Perhaps this is because the bulk of Detective Pikachu was shot on film. Cinematographer John Mathieson (Gladiator, Logan) does a fantastic job of lighting the practical sets so they mesh properly with an overlay of computer imagery. Director, Rob Letterman insisted upon shooting on location whenever possible, keeping green screen to a minimum. The resulting images depict a textured world, with infinite avenues into which a storyteller could insert their imagination. Here’s hoping the next one uses these opportunities to their fullest potential.

Released in Philadelphia and nationwide May 3, 2019.