After Get Out, whose Academy Award-winning script explored contemporary race relations with a pointed accuracy, no one could be faulted for putting on their analyst pants to parse out the social commentary in Us, writer/director Jordan Peele’s sophomore horror effort.

I certainly went into it ready to pick apart every piece of imagery on display, confident in Peele’s skills as a storyteller. Really, no stone can go unturned in this respect, when just about every inch of screen was devoted to either genre-referential Easter eggs, plot development, or thematic resonance in his debut film (I’m still gobsmacked by the fact that Chris had to literally pick cotton in Get Out in order to survive his run in with affluent racists).

Watching Us, one gets the exact same feeling — everything is purposeful — but the commentary itself is either much broader, much denser, or both. There’s a lot going on here, and the more I think about the movie and discuss it with others, the more of what is potentially being explored in this film becomes illuminated. I suspect that in the near future, as more and more folks take it in, there will be infinite readings of what Us is trying to say, and each will be informed by whatever baggage the viewer brings to it. I’ll get into my take in a bit, but let’s start with the basics. The most important thing about Us is that it is absolutely fucking terrifying. 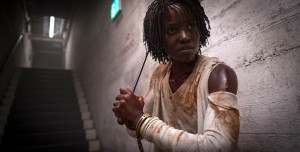 A riff on home invasion thrillers, Us tells the story of the Wilson family vacation, and the many ways it goes wrong. They’re staying at a house in Santa Cruz, hoping to hit the beach, hang at the boardwalk, and enjoy some much needed rest & relaxation. Well, most of them are. The family matriarch Adelaide (Lupita Nyong’o) is hesitant to let her tension go. You see, as a child she spent summers in Santa Cruz with her family. On one particular trip she wanders off from her parents and into a mysterious boardwalk funhouse (‘Find Yourself,’ reads the sign out front). Inside, she has a traumatic experience which has left her scarred. Being back at the beach house as an adult unsettles her, much to the chagrin (and amusement) of her husband Gabe (Winston Duke). She’s right to be wary. On their first night of vacation, they are attacked by a group of strangers — who are identical copies of the entire Wilson family.

To say more would be to betray the fun to be had, and trust me when I say that there’s plenty of it. This is a horror movie (Peele has gone on record as such, for those who are wishy-washy about the nomenclature), but much like its predecessor, Us is also very funny. Horror and comedy have always been joined at the hip, given that they are the only two genres which require the manifestation of an involuntary reaction from the audience in order to be a success (one needn’t weep for a drama to be considered good). Few filmmakers can walk this line without indulging in excess on either side of it; Peele handles the task masterfully. The laughs and screams abound, along with at least ten different moments of “go go go go run run ruuuuun!”

As a craftsman, Peele has shown considerable growth. The opening scene alone shows a command of filmic geography that Get Out was slightly lacking. Added, too, is a tremendous use of a widescreen aspect ratio, in which the viewer finds their eyes searching the screen for hidden frights, and often finding them. Cinematographer Mike Gioulakis has proven to be the best in the biz in this regard, having previously lensed It Follows in a way that turned the frame itself into a tool for manufacturing raw terror. Same goes for Us. Whether it be a daytime beach scene where a parade of shadows preempts what’s to come, or a split diopter shot which evokes the grindhouse era, both Peele and Gioulakis exhibit not just a reverence for genre staples, but an ability to push the form into a new, digital generation.

The score by Michael Abels is another area in which Us truly excels. I’d even go so far as to say that the main hook (check out the track titled Pas de deux to hear exactly where it reaches a terrifying fever pitch) ranks alongside The Exorcist’s use of Mike Oldfield’s Tubular Bells or even John Carpenter’s legendary Halloween theme. The sound matches the modern/throwback feel of the film by mixing choral performance, orchestral composition, and a digital thrum that, even separate from an onscreen image, brings a chill up the spine.

But none of this would work without solid performances, which Us has in spades. Winston Duke plays Gabe with a dweeby “Dad-ness” that anyone who knows or is a father can relate to, and when he code switches to “tough guy” when it’s time to get dirty, we see how versatile Duke can be (when I explained to my significant other that he was M’Baku in Black Panther, she could barely believe it). Same goes for the children. Shahadi Wright Joseph and Evan Alex are very believable youngsters. The way they behave is genuine, as is the look in their eyes whenever a shot focuses on their faces. It’s clear: Peele has not just become a master craftsman, but an actor’s director as well. Of course I should mention that each of these players pull double duty, also portraying their evil copies with such ferocious intensity that it’s hard to believe they are each but one performer.

The real standout here is, of course, Lupita Nyong’o. As the focal point of both the Wilson family and their malevolent doppelgängers, she has the most heavy lifting to do, and do it she does. Both Adelaide and Red, as she’s called, are fully fleshed out characters who damn near melt the screen whenever they are face to identical face. Nyong’o gives Red a variety of tics and movements that I get shivery just picturing. The way her fingers tap on her own face with curious fascination as she stares into the eyes of her human counterpart, and the way her strong-but-terrified reflection looks back at her; the way she silently, speedily moves through each scene; the strangled way in which she speaks — it’s all terrifying. And it’s made doubly effective by the way Adelaide responds. Two fully fleshed out characters, each with a duty to make you feel some type of way, and Nyong’o nails it. And if you’re not convinced of her talent, a third act bit of surreal ballet will certainly do the trick.

Also exceptional are Tim Heidecker and Elisabeth Moss, who turn in equally hilarious and terrifying performances as the Wilsons’ bickering neighbors.

So what did the movie mean to me thematically? Well, it’s hard to say since there’s a ton being explored here, and Peele has inserted a ton of ambiguity (horror’s lifeblood if you ask me) into it. Class warfare, nature vs. nurture, the dangers of a country divided, the ownership of one’s story — this is exactly the type of reactive/proactive art that the Trump era promised to provide as a silver lining to the madness. Us is a unique film, speaking its truth from a time of great confusion, and it’s from this angle that my read comes through. Us (which, in my estimation, could also be read as U.S.) is about the blame game. It’s easy to wag a finger at the injustices around us, and while doing so is valuable, we often forget to look inward. It’s hard to call foul from a place of shaky ethics, and recognizing this is a skill that seems to be fading from discourse. To misquote young Jason Wilson after being admonished by his father for cussing at the dinner table:

“When you point your finger at someone else, you’ve got three fingers pointing back at you.”

We are all extremely lucky to be witnessing Peele’s ascendance into genre legend. Wes Craven’s torch has been passed, and it’s in very good hands.

Released nationwide March 22, 2019; in Philadelphia at the Roxy and elsewhere filmadelphia.org

One Reply to “US (dir. Jordan Peele): Film review”