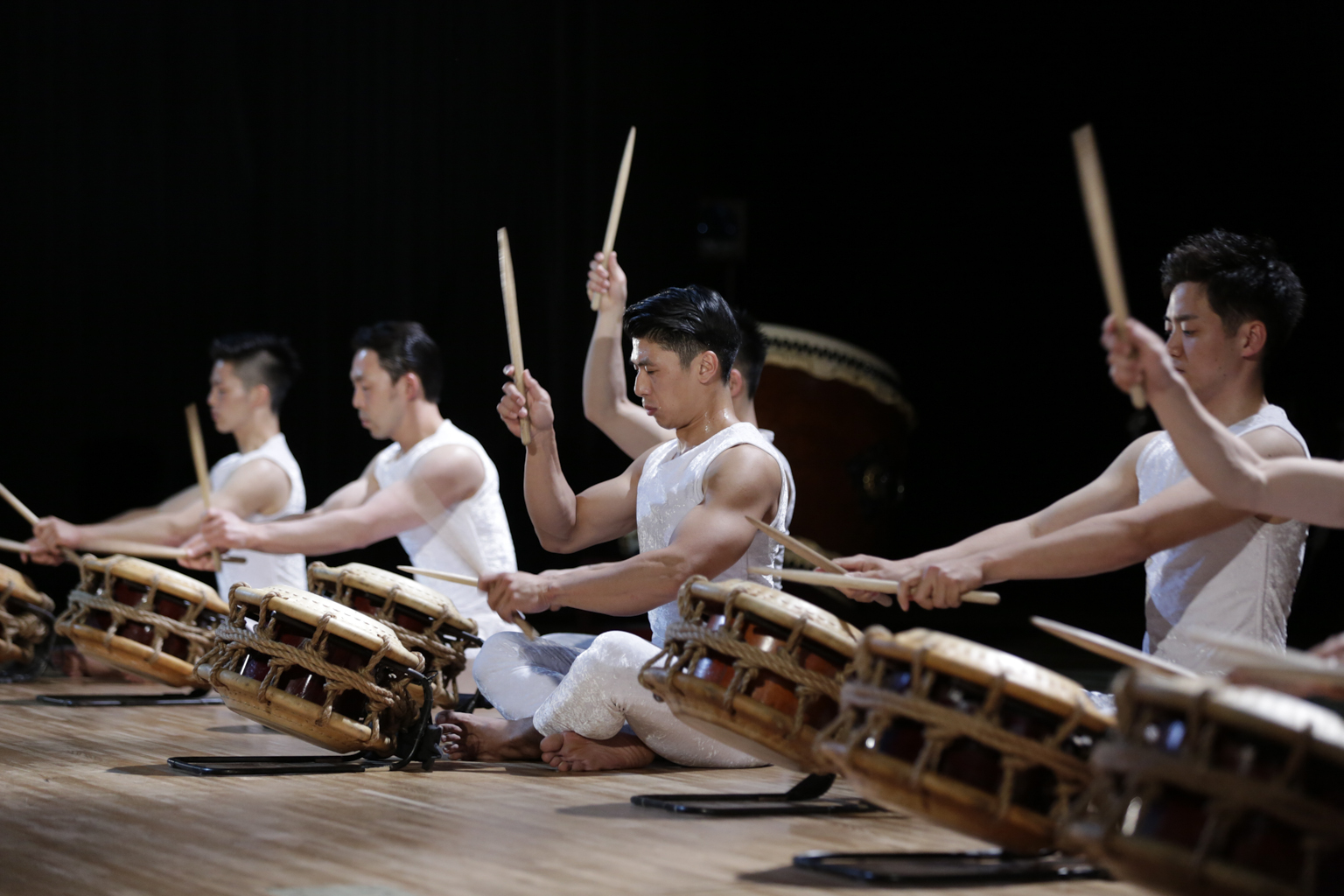 Performing for one night at Verizon Hall at the Kimmel Center, this famous Japanese taiko drum troupe, Kodo, is touring their new show through North America, having already played throughout Japan and Europe. Well, lucky us. It was a sensational evening; about 3000 people were held silent and rapt, viscerally sharing that thrilling, throbbing sound.

The cast appear in bare feet, all wearing the drums belted across their chests, and all clearly enjoying themselves for this first of eleven compositions. Things will get much more serious as the show continues; eventually no drummer will raise his/her eyes (there are four women in the cast). This first of eleven pieces, “Kei Kei,” begins with a repeated rhythm, and just as I thought it had imprinted itself on my brain, it turned, and turned again. This surprise, to be first lured into the beat and then shocked out of it, will recur throughout the two hour program, as we are introduced to different drums—small, large, enormous—played with sticks that range from tapping to bashing, with a strange effect created by the dummers hissing through their teeth. There are cymbals and gongs and delicate sticks that tremble. Sometimes they play with their hands, sometimes with their fingernails. 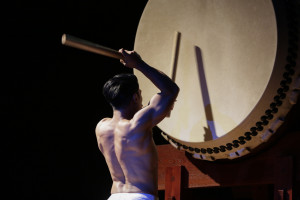 The dynamics of the lineups are sometimes comical and sometimes fiercely competitive; this is dueling at unbelievable speed. Sometimes it seems like a conversation between two drums, then a crowd.

Two men play two different pieces on the gigantic drum; they face the drum, shirtless, and we see the muscles in their backs and shoulders ripple with the drama of their relationship to the great drum.

The stunning lasta piece, “Rasen”—imagine a thunderstorm combined with a Fourth of July fireworks finale—showcases the immense power of the drum and the intensity of the player.

The name, Kodo, the program notes tell me, means both “heartbeat” in Japanese, and with some slight modification, the word means “Children of the drum,” a “reflection of Kodo’s desire to play the drums simply, with the heart of a child.” The company is based on Sado Island, where a rare few are chosen, after rigorous years of training, to apprentice. Even to someone (i.e., me) who knows little about Japanese culture and less about professional drumming, it is obvious that only with exceptional discipline and respect for the taiko tradition, as well as physical strength and dexterity and rhythmic talent, can a performer even approach this astonishing level of precision performance.

Director: Tamasaburo Bando he is also one of Japan’s leading Kabuki actors and a celebrated onnagata (an actor specializing in female roles); he composed “Rasen.”