I didn’t dare to tell anyone what “Depp” means to German-speakers, as I didn’t want to spoil the most unusual Valentine’s date I had in my entire life. Yes, Johnny Depp—out of all people—and the amazing Jenna Kuerzi (actor-singer-comedian-cabaret artist), and everyone’s favorite, the lovely Val Dunn (writer-director-deviser). 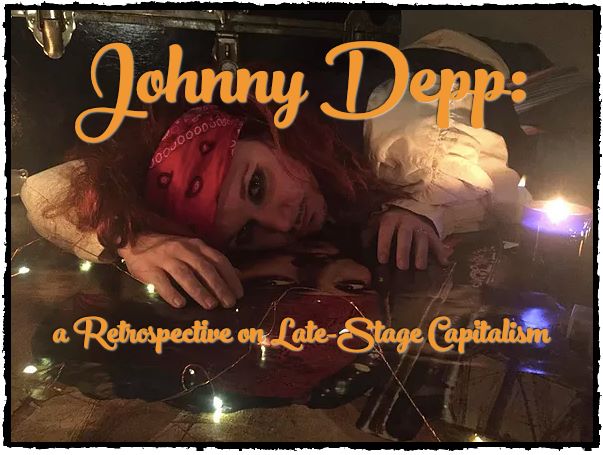 We all were to meet at 233 South Melville Road in West Philadelphia as part of Philly Theatre Week 2019 for Dunn & Kuerzi’s Johnny Depp: a Retrospective on Late-Stage Capitalism. Unfortunately, as so much in Depp’s life, the numbers didn’t match, and so I found myself chatting up strangers in the dark. Alas, they didn’t know where the house was, either. To show my appreciation for their willingness to help, I wanted to invite those good Samaritans to join this unusual get-together with three stars—two local, one international. However, I wasn’t sure whether it would be appropriate to drag strangers into the house at night—especially on Valentine’s Day.

Finally, I arrived, greeted by candles on the porch, with playwright Dunn welcoming me and another lost sheep. This old brownstone mansion was filled with actors, stage and lighting designers, many film buffs, and at least one Lebenskünstler—a life’s artist who makes the best of things —who allowed me to take the last seat available in the packed living room right next to him.

It was a full house, but Johnny Depp had not shown up yet. Stars often get away with that kind of behavior.

Eventually, Dunn—our MC for the evening—opened the program of this unusual group date. Because the alcoholic Johnny Depp is prone to forget his lines, Dunn wanted to make sure he would get prompts via images and a few cues. She even had prepared a PowerPoint presentation, with all of Depp’s many film titles and facts about how he wasted his millions, his alcohol, and his many affairs.

Dunn launched into a talk covering late stage capitalism, failed relationships, and even alcohol dependency. I knew little about his addictions and his personal scandals, let alone Deppean capitalism. This morning, I checked with Google, an old friend of mine, who defined “late stage capitalism” as “the hypocrisy and absurdities of capitalism as it digs its own grave.”

Oh, and before I forget, alcohol flowed throughout the whole evening, with Dunn and eventually Depp/Kuerzi drinking out of open bottles. Sitting below the screen with the PowerPoint presentation, I only occasionally craned my neck around to at least look at those parts where the audience burst out laughing, which happened frequently. My neck still hurts. That’s what you get when you attend a date with Depp and his enthusiastic fans. However, I got a good view of the staircase leading to the bedroom.

Depp making himself the center of his own admiration

Sure enough, after some time, I saw Depp moving downstairs stealthily, dressed as a pirate. Goateed and wearing a wild look, he already had drunk one too many. While Dunn was lecturing, he suddenly jumped into the living room, taking over, swaggering, and praising himself with all his achievements. He even addressed one of the few sensitive spots in his life: how ungrateful many people were, criticizing him for splurging and throwing away millions and millions of dollars.

Most unusual for a Valentine’s date, Dunn bravely tried to present some facts to set the record straight. Of course, Depp had none of it. Dunn had no chance. He simply tied her up and placed a scarf over her mouth and her eyes. It was a rather terrifying moment, especially as Dunn, a thought-provoking young writer, was sitting there, tied up, for quite some time while he held court. Spreading his legs, strutting about, being rude to the audience one moment and flattering the next, bribing them, he made himself the center of his own admiration.

Soon, Depp warmed up to the admiring crowd and told them that there were gold coins in their party favor bags—all ill-gotten loot. He asked his fans to throw one coin at him every time they heard the title of one of his films that they had seen. To lure them into giving up their gold, he promised a fabulous prize to the one who had thrown the most coins at him. As a result, he had to duck quite a few times.

To test his new recruits, Depp went from one person to the next and asked them how many of his films they had seen. I was impressed by the crowd—all true believers. And then came the moment I had dreaded: Depp stepped in front of me.

Feeling like a Depp virgin, I pleaded the Fifth—for the first time in my life. In my embarrassment, I failed to tell him that I had at least read a number of reviews, seen some of his obnoxious drunk interviews, and was determined not to spend a single cent on this talented, if creepy creep. In short, I have never seen a Johnny Depp film. And I certainly didn’t dare to tell him and the crowd the meaning of his name in German. (End of confession time.)

As everyone was plied with drinks and popcorn the whole evening, Depp must’ve taken pity on me and, although I didn’t deserve anything, gave me some Hershey’s kisses as a sort of sweet booby prize. Surrounded by enthusiastic Deppean super fans who had seen most of his films and who had fallen in and out of love with him since adolescence, I felt as out-of-place as a Puritan wearing a winter coat at a nudist beach.

And yet, I enjoyed the evening. One scene in particular intrigued me. Depp was cutting paper into small pieces that tumbled down like snowflakes over Dunn’s head, which was covered by two frizzy, differently-colored wigs on top of each other. “Winona Ryder,” someone shouted. “Edward Scissorhands,” screamed someone else. I had no idea what it was all about. Call me crazy, but I loved the show.

One of the most beautiful moments for me came when Depp and Dunn danced the hopscotch and sang in harmony. That scene alone was worth the whole evening. I loved their togetherness and wished they would integrate more of their voices into future performances.

I only felt uncomfortable about the audience throwing coins at the pirate’s Shrine to Self-Gratification. Some of them hit Depp directly. Frankly, I got concerned that Depp could get hurt, especially if one of the coins hit the actor’s eyes.

Revelations about Depp’s last name: Read at your own risk

At the end of the evening, most people had emptied their bags of coins, now filled with popcorn, chocolate, and prizes. With all the many gold pieces still in my party bag, I felt like Scrooge McDuck.  That old friend of mine, Wikipedia, described him as “an incredibly wealthy business magnate and self-proclaimed ‘adventure-capitalist’ whose dominant character trait is his thrift.” Yup, late stage capitalism, alcoholism, and selfishness clearly dominated the discourse.

Of course, I returned all the ill-gotten loot to Dunn and got a big hug from Jenna Kuerzi, one of the most energetic actors I have ever seen, whose performance as Johnny Depp just made my Valentine’s Day. As she had already admitted her love affair with Depp when she was a teenager and her horror in seeing his decline, I finally had the courage to tell her what “Depp” means in German: douchebag, dipshit, jackass, according to the largest online English-German dictionary, which provided 55 definitions of “Depp.”

“You nailed him,” I said. She smiled and we hugged again. What better way of spending Valentine’s Day than with two bright and wonderful actors.

Kuerzi and Dunn, the co-writers of Johnny Depp: A Retrospective on Late Stage Capitalism, are planning to update and polish this workshop version and present it as part of Philadelphia’s SoLow Fest at a small cinema in June. I’m convinced they will attract even more movie buffs who also share a love-hate relationship with Johnny Depp. Their show could grow into a cult event like The Rocky Horror Picture Show.