Next Move Dance and The Annenberg Center Live copresented a program from Martha Graham Dance January 25-26, 2019, and I was there to sketch. 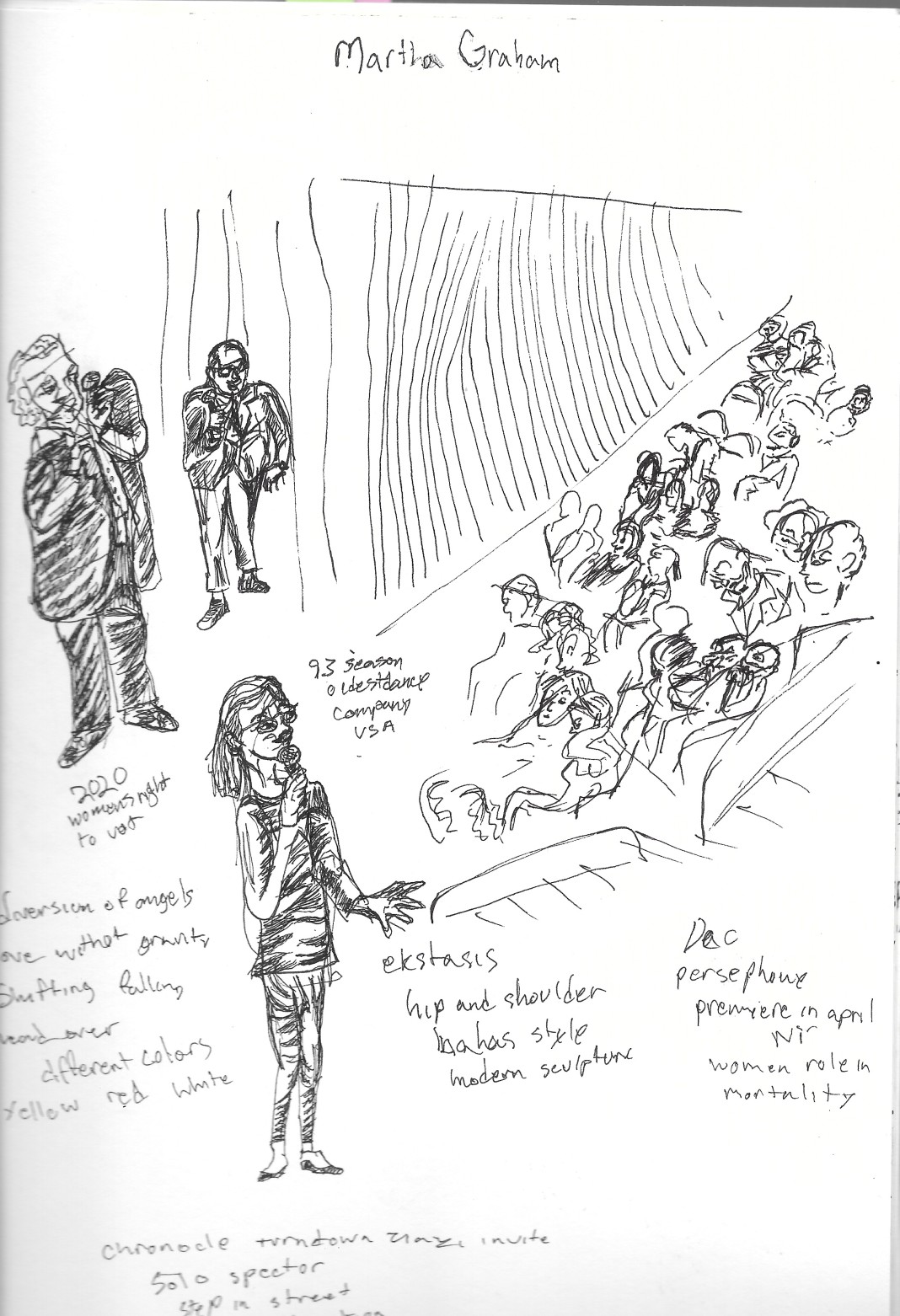 The Eve Project celebrates the 100th anniversary of the right for women to vote in 2020. We witnessed a showcase of masterpieces by Martha Graham’s avant-gardist dance company along with a newly created dance called DEO. While the bodies core is as fundamental as breathing, there was an edgy femininity starting with the first dance, DIVERSION OF ANGELS. There was a strong recollection of colors because of the brightness and the contrast of emotions in this first dance that grabbed hold of our senses for the rest of the program. A commentary of women suffrage took on a surrealist spin on the civil war dress and World War I ladies in uniform for the last dance, CHRONICLE. The arrangement of dances brought to mind a regenerative embodiment of history and persisted on recognizing women in history. 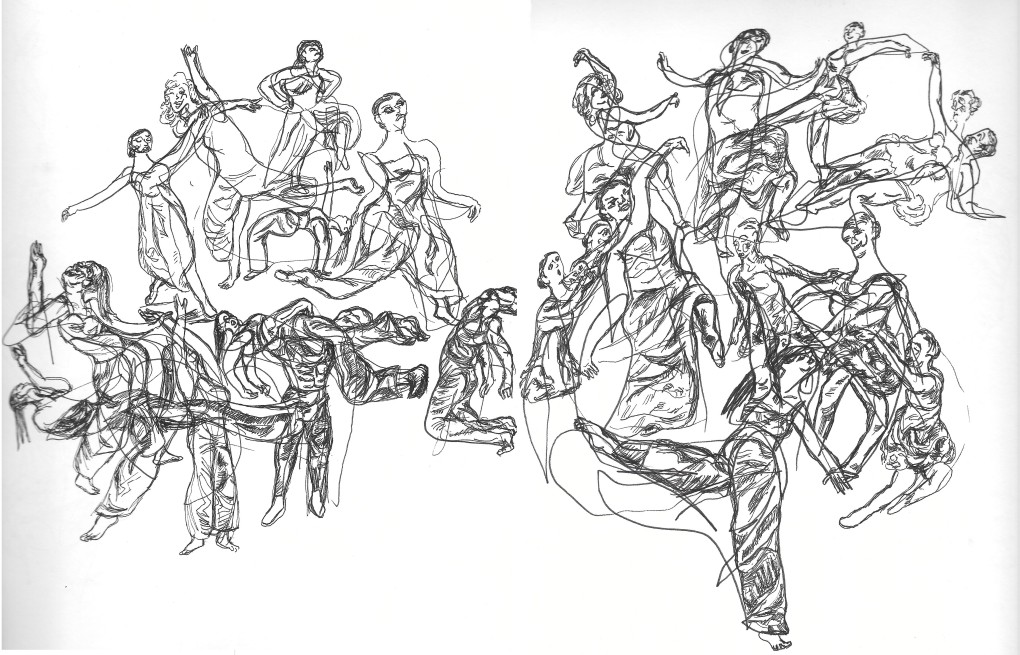 The way the artistic director, Janet Eilber, whimsically envisioned a performance about a multigenerational effect on our society. DIVERSION OF ANGELS was a rush of color representing the relationship of women in love, and falling out of love. Red, as passion, white, with a sense of maturity, and yellow, as youthful. This colorful dance speaks to the muses which identified an enchanted love or a fleeting passionate love. So Young An, dressed in red, danced alone signaling a seductive role to the audience. Charlotte Landreau, dressed in yellow, cheerfully flew by and this emotion seemed to pass by us quickly. Natasha M. Diamond-Walker, dressed in white, stood statuesque, but her partner Ben Schultz seemed to over power her, in the end by standing over top of her before the stage lights went down. The male dancers in a line played bachelors with arms out right, and slightly bent form a wall. The disintegrated color in these secondary roles breathed fresh air and symbolized time spent; the colors seemed to surround the white dress. 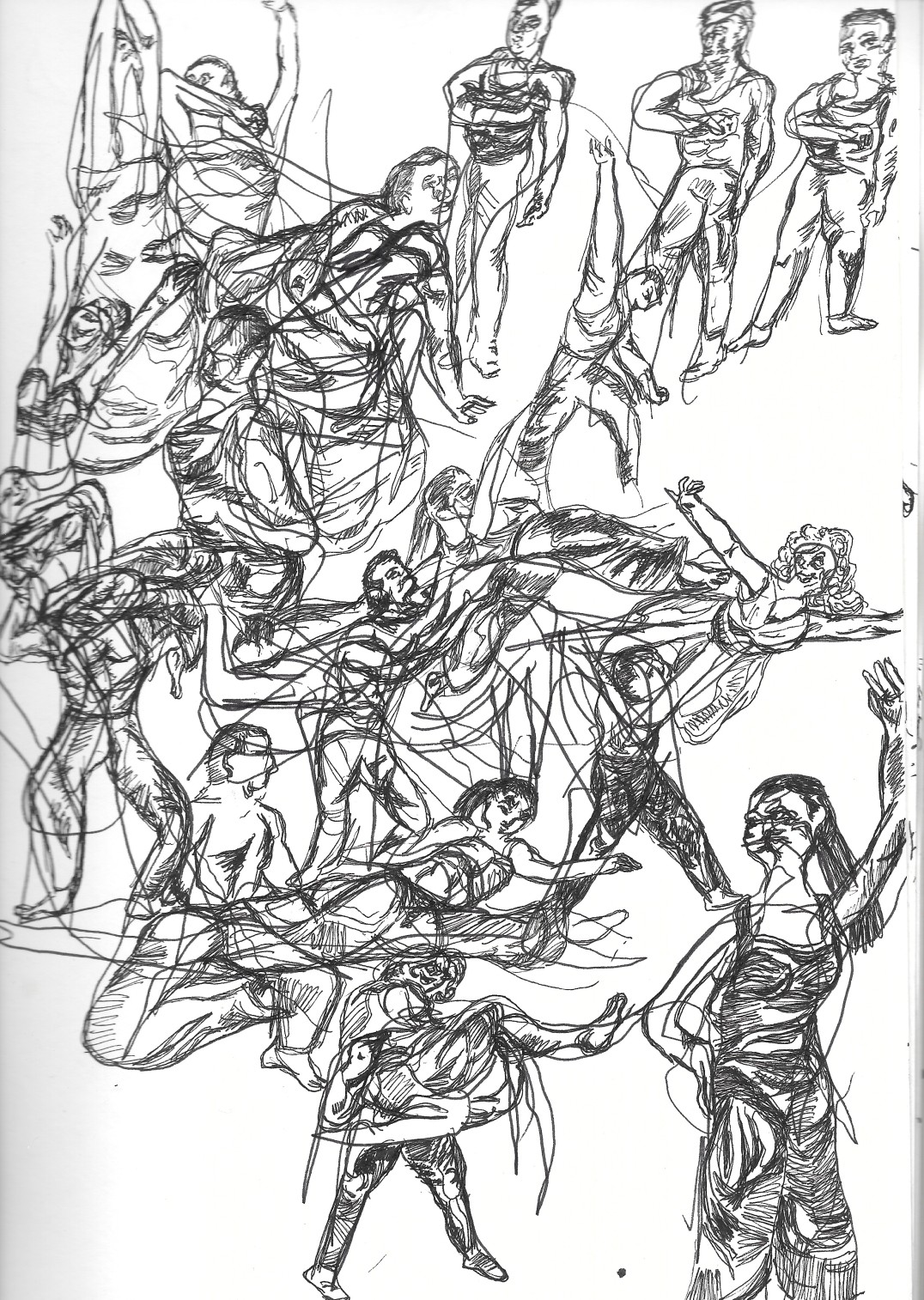 EKSTASIS, the second dance was quick and still. A figurative narrative about constrictions of liberty for women in history. Anne Shrouder in a tight fitted fabric twists and revealed a new form. This form is reptilian in the way her arms rotate like wings. The lighting design by Nick Hung plays with the fabric and the flesh in ways that stretch and materialized into an ‘unbelievable’ fashion. The program’s quote begins with Martha Graham’s explanation of the believable as, “first we have to believe and then we believe.” Shrouder’s arms turned and as her body bends down, her waist extended, slithering in place. The parody was a dark existence and we see how one moment changed everything. The slow moving shift of the slender body in a sheer white cloth introduced a limited flexibility. The relationship of shape in the context of associations we could identify with colors in the first dance began to transcend our notion of the human form to believe something different. 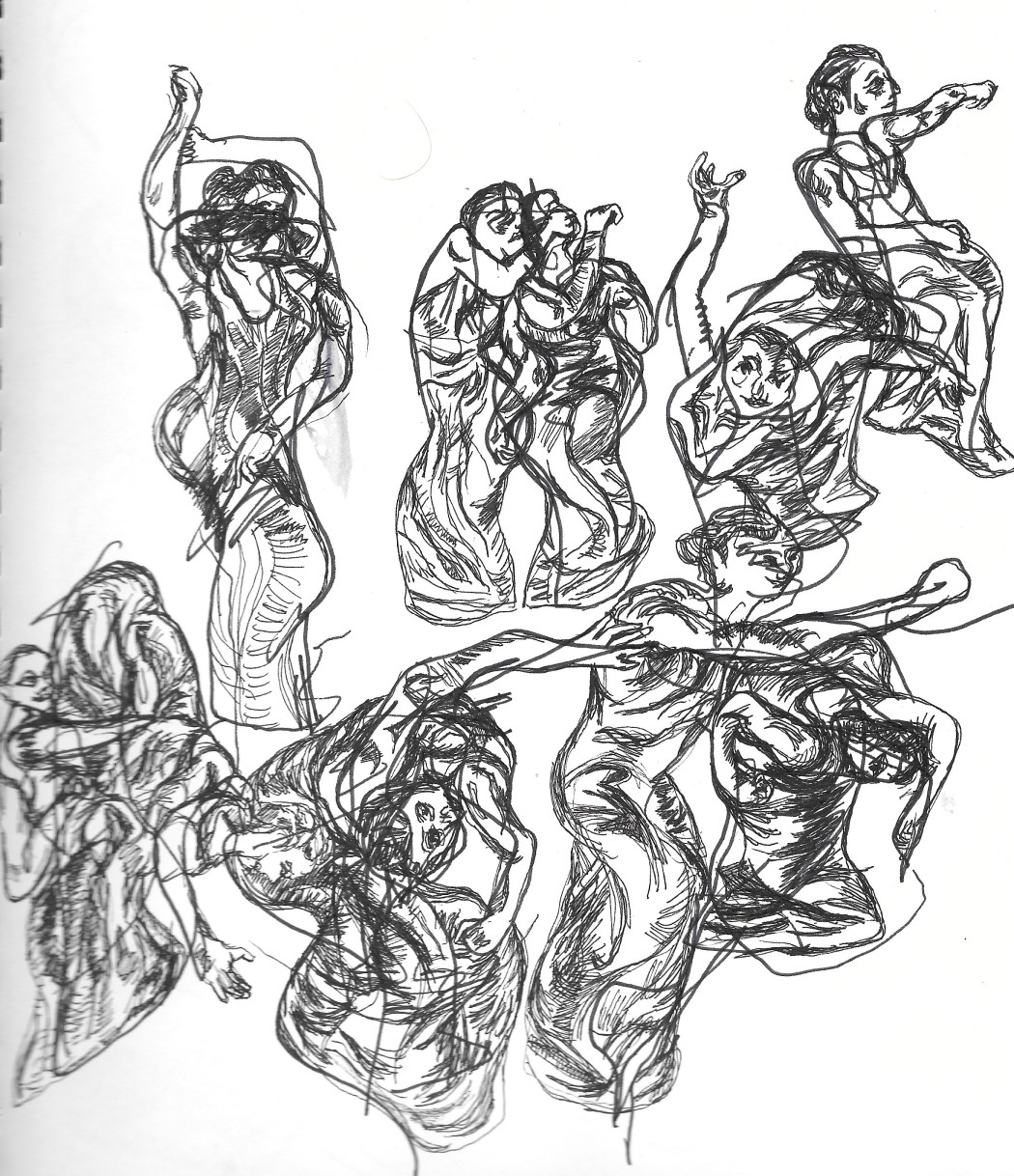 The influence of Wassily Kandinsky was noted for the 1948 premiere of DIVERSION OF ANGELS. And I felt a kind of journey through hell with Virgil and Dante for the next dance, a work in progress called DEO. The myth about the goddess of harvest and fertility along with Persephone begins with a mad women, played by Natasha M Diamond-Walker. The rest of the dancers were laid out behind her on the stage. The work in progress was a preview for an upcoming premiere in April. The idea of madness was instrumental, and it was a composite to formulate human nature within a ring of dancers. In the suffrage for women they valued multiculturalism and on stage this translated the underworld to be the suppression of life, logic, or reason. 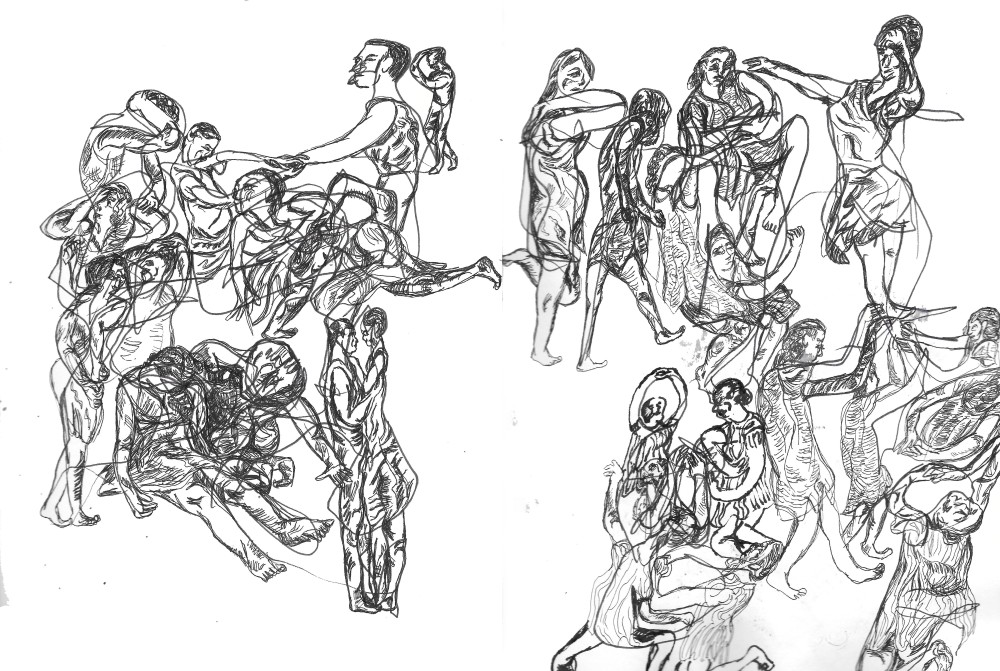 In DEO, the costume design by Karen Young reflected the gloomy light off the dancer’s tunics. The darkness in this dance set up an environment of scrambled beliefs with a daunting idea behind the darkness. An appropriation of Persephone, daughter of Demeter, abducted and brought to the underworld was a protest against her kidnappers. In my opinion it was jointly memorializing unrecognizable suffrage workers, like Frances Willard Munds, the first woman to serve in the legislative body in the Arizona State Senate; Ernestine Rose, a speaker in the House of Representative that spoke out for women suffrage; Betsy Graves Reyneau whom spent sixty days in jail for picketing in front of the white house with other Michigan women; Emily Newell Blair represented women in the Democratic party as the national vice chairwoman and helped women to be elected. These incidental moments through history look as if they were episodes that entered Martha Graham’s CHRONICLE in 1936. 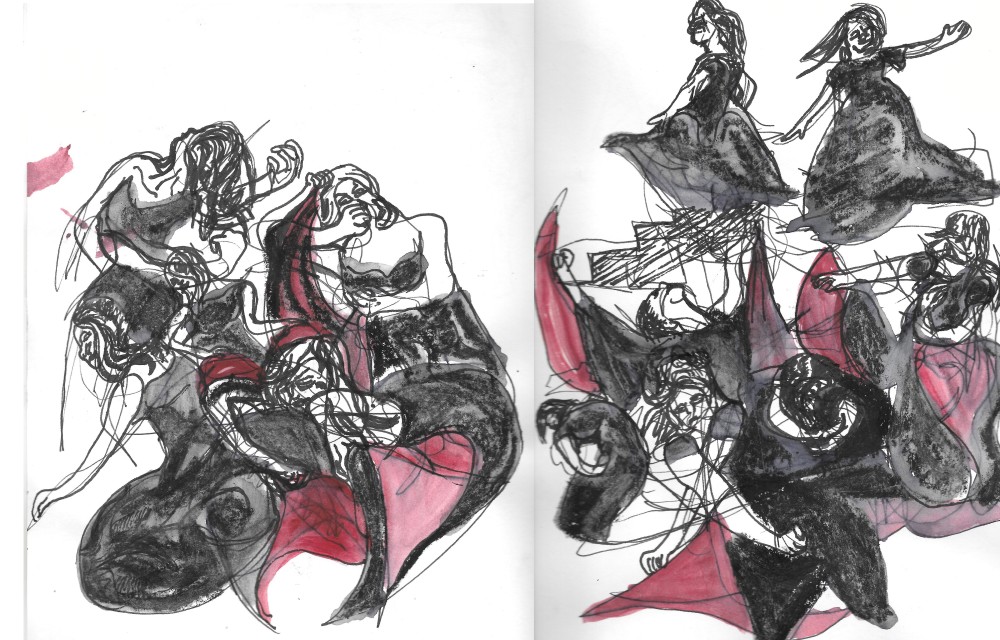