The topic of race surfaced into the national conversation once again when the governor of Virginia, Ralph Northam, was accused of appearing in blackface 35 years ago in his medical school yearbook. Northam, unfortunately, created a public relations disaster for himself when he apologized for the photo and then promptly changed course by denying that the person in the photo was him. Northam’s change of mind created confusion—did he or didn’t he?—even though he was already in the “No forgiveness” hothouse when the allegation surfaced.

Race has been on my mind lately for another reason. Recently I attended InterAct Theatre’s excellent production of Hype Man: A Break Play by Idris Goodwin and directed by Ozzie Jones at the Proscenium theater at the Drake (till February 17).

Hype Man concerns a small Hip Hop group about to make their national debut on The Tonight Show. Verb (Carlo Campbell), a black rapper, is often at odds with his childhood friend, Pinnacle (Kyle Glenn), a white Irish rapper more or less molded in the style of Eminem. The female member, Peep One (Blanca Sanchez)  acts as a bridge between the two friends, especially when Verb wants to go political after he hears news of how the local police shot a 13-year-old black boy to death after the boy held his hands up in a gesture of surrender.

Verb wants the group to work on a ‘Justice for Jerrod’ statement for their Tonight Show debut but Pinnacle insists that as musical entertainers they must stay neutral. Pinnacle fears that a radical political statement on national TV will destroy their big break and everything they’ve worked for. Unconvinced, Verb wants the group to go full social justice warrior regardless of the consequences. His willingness to sacrifice money and fame creates tension and some pretty compelling onstage moments.

Both Verb and Pinnacle take extreme views in this “all or nothing” world: Will it be blatant bullhorn tactics or only the kick ass lyrics of “fun rap?’ What about something in-between that combines the entertaining elements of good rap (some would argue that good rap is an oxymoron) with well placed references to a disturbing social problem? It can be done, of course—and this play shows how it can be done—without either Verb or Pinnacle having to become enemies. This play shows how compromise and dialog can work as opposed to the emotional response of walking away while hurling insults and labels.

These days, a simple allegation is all that’s needed to set up a national chorus of “No further discussion needed—let’s hang the accused.” Hanging people on allegations certainly does not bode well for the future, if only because the depth of the Orwellian Fault Finding Machine will be ten times as powerful in 2025, meaning that things that are not considered offensive today will be considered (very) offensive tomorrow. The upshot of this is that you had better be careful what you say or write in your private or professional life today because the invisible recorder of misdeeds is working overtime to accuse you twenty or thirty years from now. 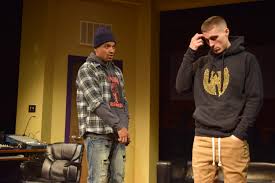 In past articles I’ve offered my own theories as to why this might be, but I don’t mind restating them here. People who have no religion or who do not practice a faith of any sort tend to put the energy they would have put into a transcendent God into a secular ideology of ideas. This ideology, whether left or right, becomes a kind of infallible church, a code by which to judge all things (and people), social and political. A better word for this might be idolatry, because for believers of this type any transgression is perceived as unforgivable.  This is especially true in politics, where there is rarely redemption or forgiveness, only eternal damnation (“His career is over”).

As I see it, there can be no progress in race relations when one party throws out labels and insults and then walks away, as if the label—in this case, racist—was an indelible marker. After all, when everything in society is considered racist, in the end, nothing is racist. And this cannot be good for society.

As for that label, Tucker Carlson’s piece in The Daily Caller reminded me of the word’s most far-flung definitions:

Mary Poppins, which I saw 200 times as a teenage theater usher, resurfaced in the news recently when a writer for The New York Times wrote:  “When the magical nanny (played by Julie Andrews) accompanies her young charges, Michael and Jane Banks, up their chimney, her face gets covered in soot, but instead of wiping it off, she gamely powders her nose and cheeks even blacker.”

What is this if not something bordering on the fringes of insanity?

The better option is to do the hard work of getting to know one another, like the characters in Hype Man, and to leave the ‘instant oatmeal’ labels on a shelf in Staples.