Chris McCarrell is on an epic quest as Percy Jackson in the touring production of The Lightning Thief: The Percy Jackson Musical. As the son of Poseidon, McCarrell’s character is on a mission to find Zeus’s lightning bolt and prevent a war between the gods. Fans of Percy Jackson will not be disappointed in the musical adaptation based on the Disney –Hyperion book. McCarrell took a moment out his touring schedule to talk about his role as “leader of the gods.”

The Lightning Thief: The Percy Jackson Musical is playing through Sunday, January 27, 2019, at the Merriam Theatre.

Debra Danese: How familiar with Rick Riordan’s Percy Jackson & the Olympians series were you before taking on the lead role?

Chris McCarrell: Not at all, which is nuts. I was always busy spending my fictional life in theatre and I was never a big reader growing up. After I learned that I got the role, I read the first book. That is when I discovered the secret to our show. The script held the tone of the books so well.  There’s always a one- liner right when he needs to be focusing more on not dying.

DD: As leader of the demi-gods, what are some of Percy’s biggest challenges? 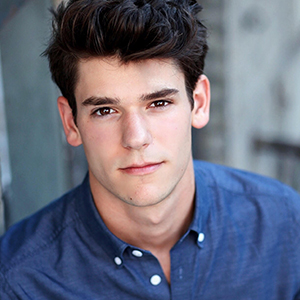 CM: In our show, when Percy comes back to camp, he realizes how the animosity between the half bloods and their parents can turn violent. So, I think for him it’s realizing that they’re on their own and they have no other choice but to take the world on themselves.  A part of growing up is realizing that nobody is doing that for you.

DD: Which of Percy’s powers is your favorite?

CM: My favorite is his control of nature. I mean, who looks at a lake and can be like “I’ve lifted that.”

DD: What traits do you and Percy have in common?

CM: Our love for our mothers. My mom and I have a really close relationship. So, I totally understand why he would risk everything to get her back.