Shakespeare fans have to endure much at the hands of iconoclastic theatermakers. I’ve seen a Taming of the Shrew framed as a reality TV show, a kazoo-heavy Macbeth, a Titus Andronicus that turned every death into a puppet fight.

By comparison, the Wilma Theater’s crimes against the Bard are relatively minor. Sure, some words are changed and many are cut in the theater’s current staging of ROMEO AND JULIET, but what Shakespeare production doesn’t feature extensive edits? Sure, the action gets interrupted repeatedly by musical interludes, but the original compositions by songwriter Gracie Martin (accompanied onstage by a chorus of UArts students and a live band) are beautiful and mostly fitting. With costumes, language, attitude, and interpolation, director Blanka Zizka makes every effort to create a ROMEO AND JULIET that will appeal to the 2,000 students the WIlma expects to see the show over its three-week run.

I’m not the audience they have in mind, but it’s a noble aim. Sondheim had similar goals with his 1957 Broadway classic West Side Story, as did Baz Luhrmann in his vibrant 1996 movie. I was the audience for the latter adaptation, which came out when I was a teenager and won over Gen Xers with its charismatic young leads, indie soundtrack, fast-paced (for its time) edits, and Hawaiian shirts. Maybe teenagers today will be similarly wooed by the Wilma’s production.

The Capulet soiree at which Romeo (Matteo Scammell) meets Juliet (Taysha Marie Canales) gets a EDM makeover, with a massive disco ball spinning to driving techno beats. This is just one of many visually stunning scenes, the work of scenic designer Matt Saunders and lighting designer Maria Shaplin. 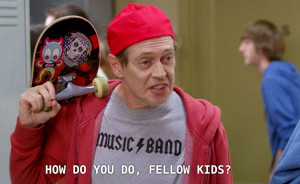 The technical brilliance doesn’t extend to the costumes: Most of Vasilija Zivanic’s outfits seem like bad movie guesses at what stylish kids would wear (mohawk! black shirt and tie!). As Romeo, Matteo Scammell emphasizes his character’s youth, presenting as a disaffected yet melodramatic teen dressed in almost-Capri-length slacks and a baggy French-tucked T-shirt. Romeo is accompanied to his parties by Kevin Meehan’s snowboard-style Benvolio and a hip hop Mercutio, played by real-life MC Anthony Martinez Briggs of theatrical hip hop group Ill Doots.

The costumes signal a production straining to appear hip and edgy. I might be wrong, but I suspect kids will see right through the attempt and I mourn the poetry, tragedy, and humanity which the production casts aside in the effort.

Briggs gets full license to rework his character’s dialog, so Mercutio’s admired Queen Mab speech features references to Cardi B and smoking kush and vaguely contemporary quotes of Snoop Dogg’s “Gin and Juice” (1993), Lil John’s “Get Low” (2002), and Khia’s “My Neck My Back (Lick It)” (2011).

Mercutio is just one of Shakespeare’s constellation of fully-formed characters surrounding the star-crossed lovers. Though Krista Apple speeds through her lines as the Nurse (a tendency throughout the production), Steven Rishard captures the strength and misused power of Capulet, with Suli Holum as Lady Capulet. The highlight is Lindsay Smalling, who plays Friar Lawrence with a surprisingly fitting West Indian accent, the laid-back reggae vibe suiting a well-intentioned character whose actions help lead to the tragic end.

It’s a shame most of his second-act scenes are cut. The extensive cuts include the prologue (replaced by an inscrutable chorus chant of “love. hate. hate. murder.”) and dialog establishing the warring houses. I know what’s going on, but will a newcomer to the show?

Some of the production’s dissonance―if we’ve tried so hard to be cool, how do we deliver these words―gets smoothed over in a less effortful second act. But here, Zizka cuts the Friar Lawrence scenes which highlight the might’ve-been-different tragedy of events.

If the poetry of the text is cut or elided by speedy delivery and attempts at humor and the basis of the tragedy is given short shrift, what are we left with? What about Shakespeare do we want kids to like?

I remember seeing the Luhrmann movie in the cinema and scolding friends who got up to leave after the couples’ death: “Don’t you know the play?” Zizka’s version cuts Shakespeare denouement; we don’t get a final glimpse of Smalling and Rishard. Instead, kids stand around the tomb of Juliet and, er, Tybalt (Justin Jain) (there’s no room for Romeo so he’s on the floor).

“Fuck this,” says one of the kids.