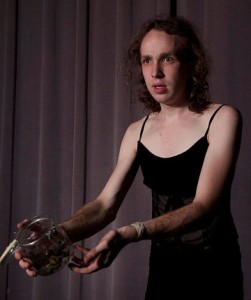 XY SCHEHERAZADE works very hard to conjure the moment when “a story that you’re telling a friend becomes, for a minute, a shared perspective.” But it deploys about every tool that avant-garde theater has to offer, and comes across as trying too hard. It’s like a friend who can’t tell a story without backtracking and impulsively jumping around to fill in minor details. Grace (Sam Swift Shuker-Haines, also the writer), our transgendered storyteller, has a story to tell about body shame and confusion and self-acceptance and pride, but can’t tell the story clearly. It’s a purposeful technique, but it’s also a problem. With an unreliable narrator, a cryptic story that unfolds non-linearly, and an abstract way of relating the plot, this show gives the audience very little to grab on to.

There are some beautiful moments, but none feel like shared perspectives. We’re often left to our own devices to build a scene (“Imagine a boulder…”), only to later find out that Grace has a very specific image in mind that we don’t (“… the boulder looks like the Virgin Mary”). When we do get a clear picture, it tends to be a caricature. Too many scenes that are supposed to be powerful come across as campy, and minor mortification of the flesh replaces actual emotional vulnerability. In the end, the play never decides whether to be compelling or enlightening, and asks the audience to do most of the heavy lifting. Ironically, for a show that centers around Scheherazade (the narrator of Arabian Nights) , it has no strong frame story. Until Unstuck Theater figures one out, we’re left hanging. [Plays and Players Theatre] September 19-22, 2013, fringearts.ticketleap.com/xy-scheherazade.