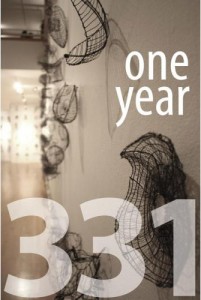 Anyone stumbling into ONE YEAR by accident, like I did, will realize immediately that they had broken in on something transcendent. In front of a backdrop of white curtains, seven women read short poems they wrote for the sons, husbands, brothers, and uncles of theirs who were victims of murder in Philadelphia. Last year, there were 331 murders here, a number which is easy to depersonalize. “I thought my love for you would always keep you safe forever,” says Ethel Johnson in “If”, a poem for her grandson, murdered in his car by “thugs.” The brutal reality of the words, edited by Kristina Moriconi and workshopped as part of grief support groups at Mothers in Charge, reminds us of the connection between gruesome statistics and their human effects. After the poems, singer, educator, and masseuse Marcy Francis leads a heartening call and response, drawing hope and good humor out of disaster.

There were only two performances of ONE YEAR, which was performed in front of a linked exhibition by MamaCITA. Under the Sanctuary at the Rotunda’s gorgeous domed ceiling, hundreds of wire sculptures hang against white curtains. These structures resemble vessels bent out shape or withered, or strangely adapted sea animals; they challenge you to make them a shape but are impossibly warped, twisted from what they once were or could have been. The room tingles with rage, bafflement, and a whimsical loveliness. [The Sanctuary at the Rotunda]. September 7-21, 2013, fringearts.ticketleap.com/one-year.