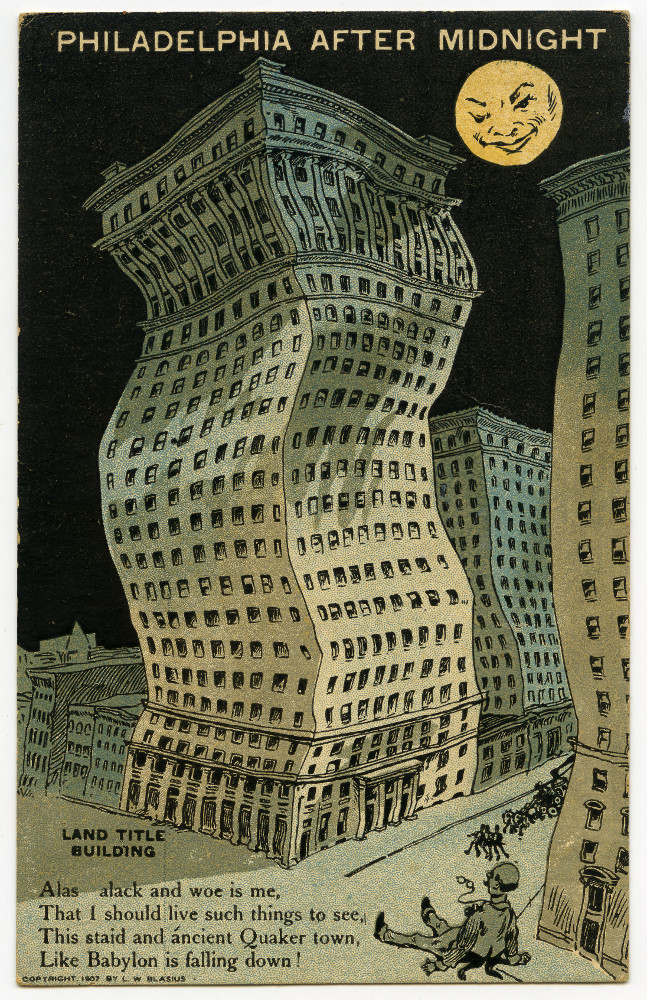 DAL is back, roaming around.

And during all the years I’ve been roaming around Philly—before and after dark—I must have walked past the Athenaeum hundreds of times without ever going in. What a lovely building! A National Historic Landmark, it was designed in 1845 and is one of the first Philadephia structures built of brownstone. Its library on the second floor is a beauty: hushed and softly lit it is welcoming to both general readers (entrance is free) and research scholars (members only). Is there a more charming sign than “Pencils only, please” that greets anyone using rare books? There is a little chess room at its entrance, and an elegant balcony overlooking Washington Square.

But what brought me there was their current exhibition, Philly After Dark, a whimsical and educational show combining images of the city by moonlight, gaslight, electric light, fire and lightning. Some of the images are old photographs, some are lithographs, some are artists’ renderings of events, some are humorous posters. It’s a history lesson in miniature, curated for an hour’s enjoyment. The arrangement is by category, not chronology: “Entertainment,” “Disaster,” “Business” and “Landmarks.”

Here are a few of my favorites from “Entertainment”:

Four goofy posters from 1907 called “Drunk After Dark,” each with a silly poem, each showing the city at a radical tilt;

There is a photograph the Met Opera House at Broad and Poplar Streets, before its celebrated recent renovation;

A lovely sepia print of the Academy of Music in 1875, with crowds coming and going in horse-drawn carriages and men in top hats;

Expectably, the “Disaster” pictures are dramatic:

The 1838 destruction by fire of Pennsylvania Hall , the first building to be designated as a meeting place for abollitionists; four days after its openinig, it was destroyed by arson.

And, more than a century and a half later, the MOVE bombing.

And don’t miss “Jersey Lightning,” the first photograph of lightning, called “Jove’s Autograph,” one of many images of Philadelphia’s night sky.