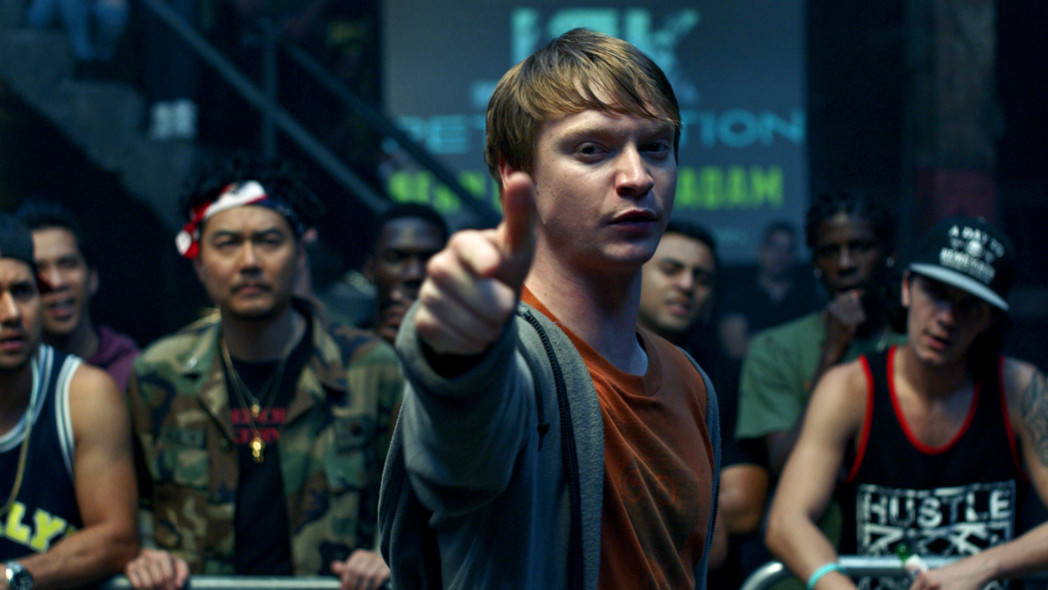 The film blogosphere has been alight about Joseph Kahn’s latest feature, Bodied, since its explosive debut at TIFF over a year ago. Produced by Eminem, this oddball comedy tells the story of a stereotypical whiteboy becoming heavily involved with the underground battle rap scene. One would naturally think that this kid does not belong here, but Kahn’s unconventional comedy reckons with the idea of cultural ownership (and the notion of gatekeeping) head-on.

Written by Kahn and famed battle rapper Alex Larsen, Bodied has a genuineness to it that would certainly be lacking if written by an outsider. The rhymes are just as entertaining as the film surrounding them, and Kahn uses his kinetic direction to highlight the battles with on-screen bells and whistles, ensuring that the clever lyricism on display isn’t lost on less savvy viewers.Calum Worthy plays Adam (rap name: Adam), an enthusiastic student who is preparing a thesis on the use of the N word in battle rap. Seeing that it’s employed both as an insult and as a punchline, Adam seeks some information from Behn Grymm (Jackie Long), one of the best battlers in the game. The two form a fast friendship, and before long, Adam is drawn into a battle of his own — a battle he unexpectedly wins. This leads to more opportunities to compete with other stylish characters, climbing the ranks as his own popularity grows.

Bodied studies culture clash in a way that is much deeper than what the surface level appearance of the film would indicate, digging into the ideas of informed storytelling, racial coding, propriety of word usage, and an understanding of the power words hold, even when unattached to intent. During a post-screening Q&A, Kahn spoke of his advocacy for free speech, indicating that he often sees a cultural embrace of censorship — a desire to shut out problematic ideas rather than contend with them. Bodied carries this torch proudly. This is not a movie about shutting down dissent. Instead the film advocates that the only true antidote for dangerous thought is an arena where it can be exposed and dismantled. I can’t tell you how much this sentiment means to me.

Social consciousness aside, the film’s two greatest strengths are its satirical edge, and its lightning pace. This is a film meant to be watched with an enthusiastic crowd multiple times. It is meant to be enjoyed with a diverse crowd, all of whom can come to it from a different angle, highlighting nuances of the humor and drama.