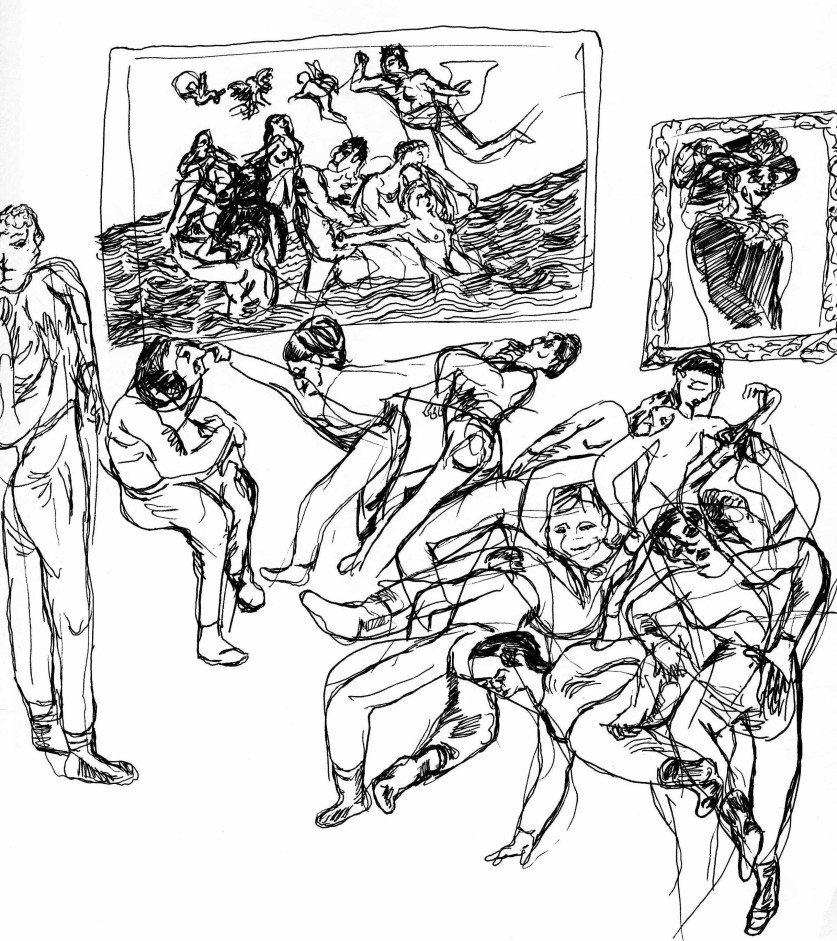 Kun-Yang Lin and Dancers at the Philadelphia Museum of Art were part of the Final Friday in July. They were asked to create a piece in response to the new video exhibition gallery, The Future Fields Commission for time based artwork. The dancers moved throughout the European Galleries 1500-1850. They stood, crawled, and lunged into each other in a way that reimagined the space and the art on the walls. They created a new texture and took away the tension which normally comes with looking into the context of Western art.

The dancers ghostly stares and all-white suits delivered the audience to a place outside of the art museum, and to another world. The live performance took place in front of statuesque pale maidens, and magical sea creature paintings, along with noble portraiture and mythical retreats into nature.These art objects were subjected to a perception of another time when the novel was the greatest escape. Two worlds, paintings and dance, interacted with a paramount beauty of art history. The movement mixed the two modes of expressions with an awareness to classical antiquity. The modern dance form was a screen into a reality around the meaning of art, and fragments of the European art framed the ever-present anomaly. The live performance flowed into three rooms, like three chapters from Rachel Rose’s Wil-O-Wisp. 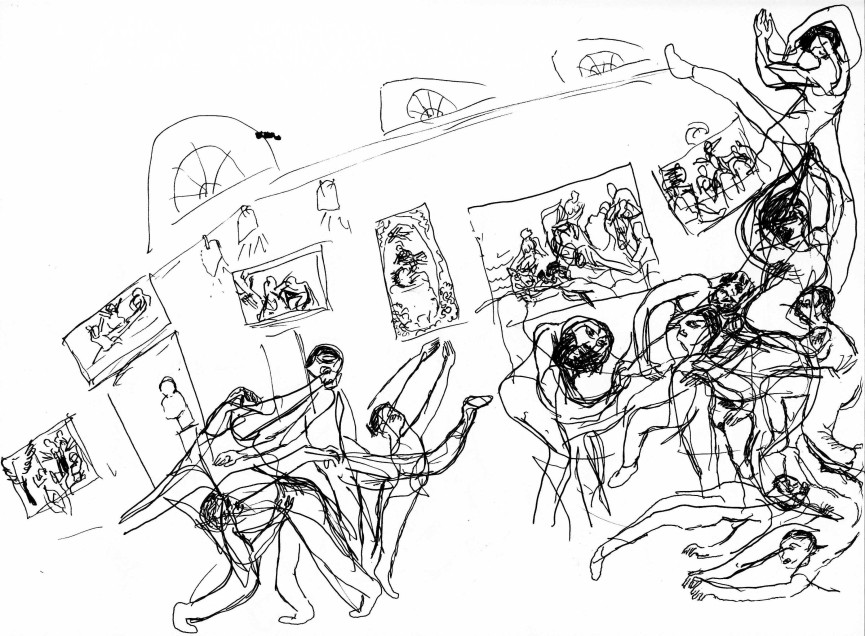 Kun-Yang Lin’s reaction to Rachel Rose’s Wil-O-Wisp showed an order that fit a specific mold in society. The composition showed a dynamic family structure in motion and representational forms, and style contained in the still life paintings. Wil-O-Wisp is a twenty minute narrative in three chapters. It starts with a household with familiar gender roles, like the man bringing home fresh meat from hunting. The focus moves to the transgressive daughter, Celestina, who sneaks out at night and accidentally burns their home and killing her family inside, but Ipseth Blake, the mother, was nowhere to be seen. The suspicion grew from the wild imagination that she actually reincarnated into a cow. The three rooms used for the dance transitioned from a snippet of society, a ceremonial pit, and the dancers played along the fringe of society.

In the first room, Evalina Carbonell made her way through the entrance way to the gallery to meet Frank Markocki at her feet, and Kyan Namazi with Wei Wei Ma stood posed in front of the paintings on the wall. They rotated, and took turns to stretch out and occupy the space. The pattern showed one body replaced with another. The final attempt of the dancers to take the place of the narrative captured the infectious movement of fire. 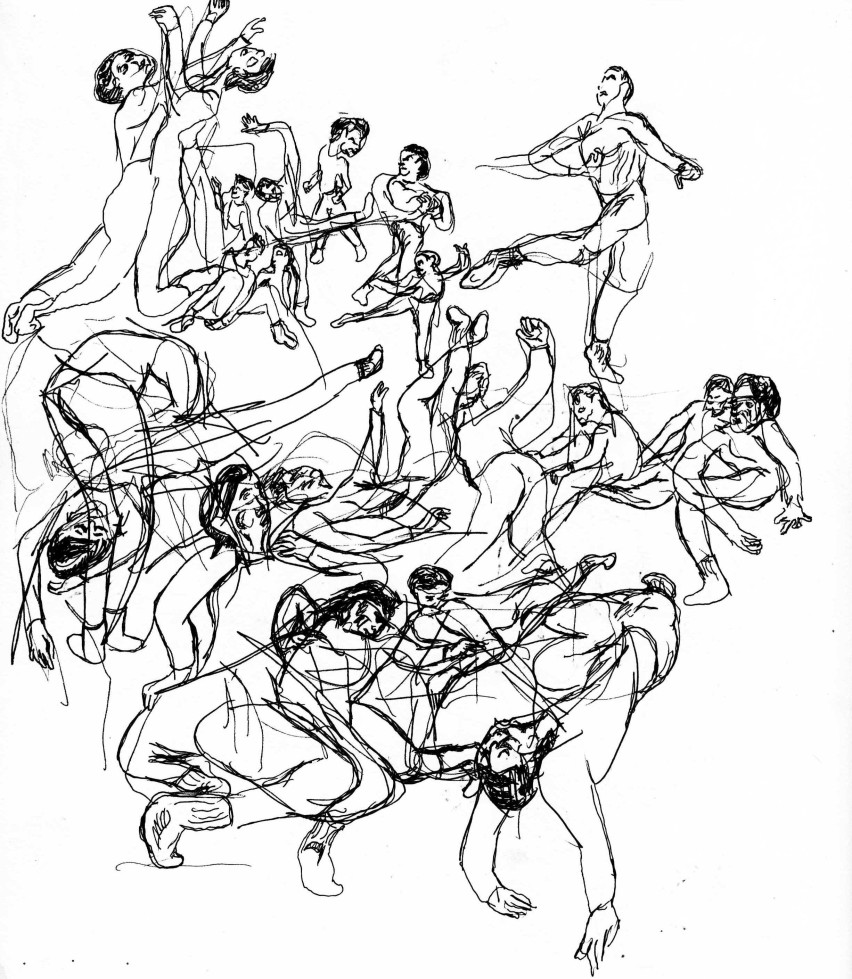 The abnormality of red socks on one of the dancers stuck out as a sign of adultery, or witchcraft suspended within Rose’s narrative. In the video, Elspen Blake was detected to be a sorcerer, and the influence of magic increased a skepticism about her evil powers. The modern dance brought mystery, ritual, and gesture. In the middle room, a large portrait of Benjamin Franklin hung on the center wall. The site specific art gallery that happened to be a backdrop for an underground ritual also changed the meaning of the art along the walls. It was an escape from the prestigious gallery to a universal creation.

The ring around a bust became the center of this ritual ceremony and the dancers hugged the floor. The spiral in the marble floor design added another dimension. In close corridors of the round room there was a pit where the dancers moved on shaky ground. It was a spell that replaced the permanence of Western art with contemporary attacks on colonialism, and hierarchies that set people against each other. The busts of famous men in nooks around the room crowded the dance artists, but the movement directed another incentive. For instance, the video installation, Wil-O-Wisp, plays through similar disquieted coincidences uncovering something sinister amongst the townspeople towards Elspeth.The dance across the gallery floors, adds mystery into the mix of established canons of beauty. .