Weaving together acrobatics, dance, Cyr wheel, storytelling, juggling, and aerial feats, the evening-length performance follows a group of performers whose virtuosio athletic feats are offset with the fragility of humanity, and the inevitable risks of passion and love.

The Seattle Times described it as  “a feast of acrobatics, juggling, mime, contortionism and dance.” According to the company’s hometown paper, their work “explores the pitfalls of romance while expertly defying gravity.” 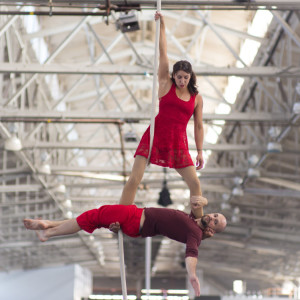 Founder and artistic director of Acrobatic Conundrum describes the work as  “poetic, a little absurd, and deeply relatable.” Acrobatic Conundrum has appeared nationally and internationally at such venues as New York City’s SummerStage, the Chicago Contemporary Circus Festival, the Smithsonian American Art Museum, the Vancouver CircusFest, TEDxRainier, and The Backstreet Festival in Alexandria, Egypt. They visit FringeArts for three performances on October 20 and 21. Tickets are $20-$35.