Caen Amour ran September 13-15, 2018, at FringeArts in Philadelphia as part of the 2018 Fringe Festival and in New York City September 18 & 19, 2018, at The Kitchen as part of the Crossing the Line Festival (sponsored by the French Institute Alliance Francaise). Sketches from the NYC production. 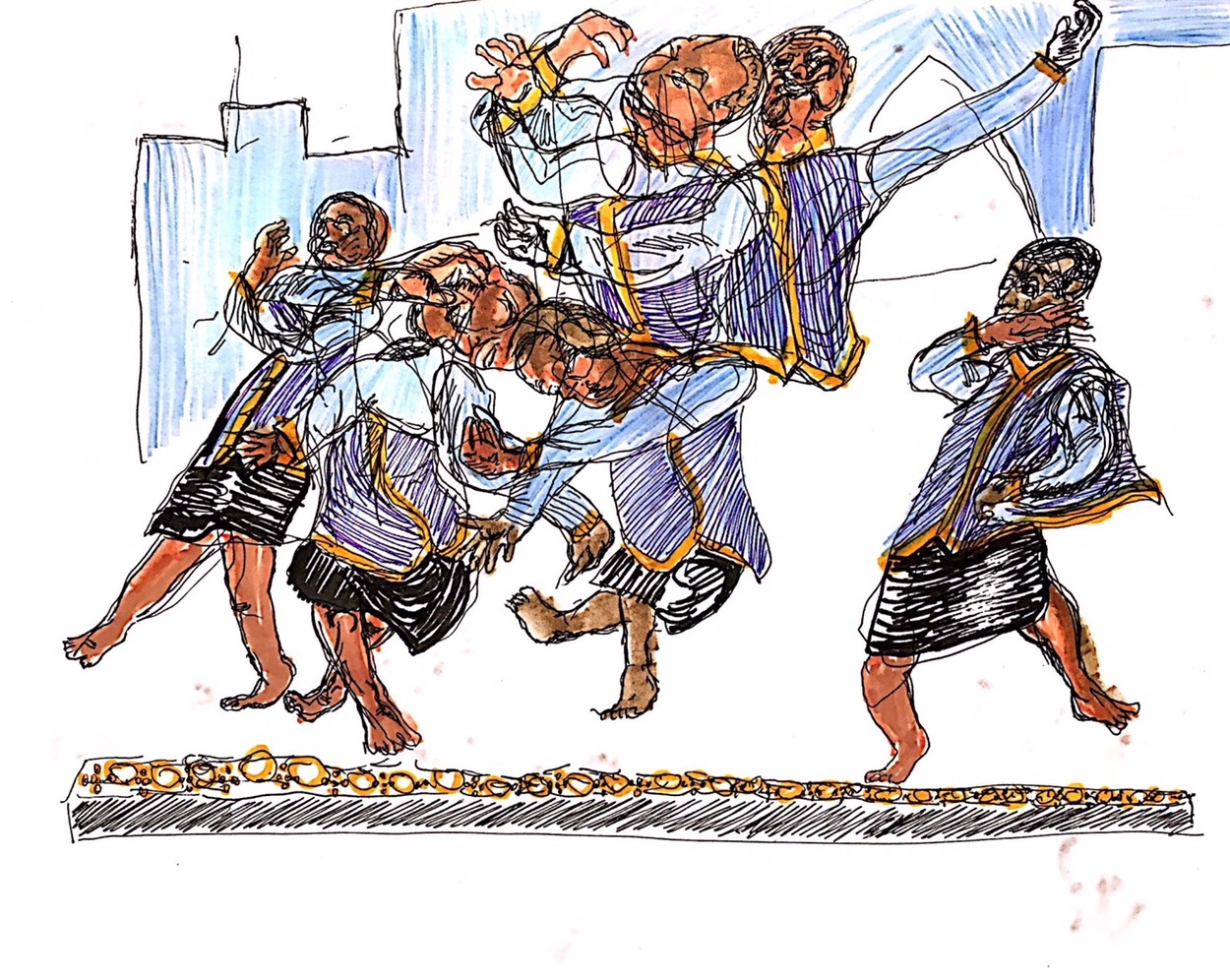 The hoochie-koochie is a 19th century style of promiscuous femininity, but Trajal Harrell retraces the trend of an unshakable misogyny. He broke down clenching the colonial pink ribbon dress. As if it was after a person’s death, and the dress was all that was left. I suspected an inherent beauty lost its redeeming quality. It struck a nerve that a person could be invisible compared to the color, style, or fabric that they wore. 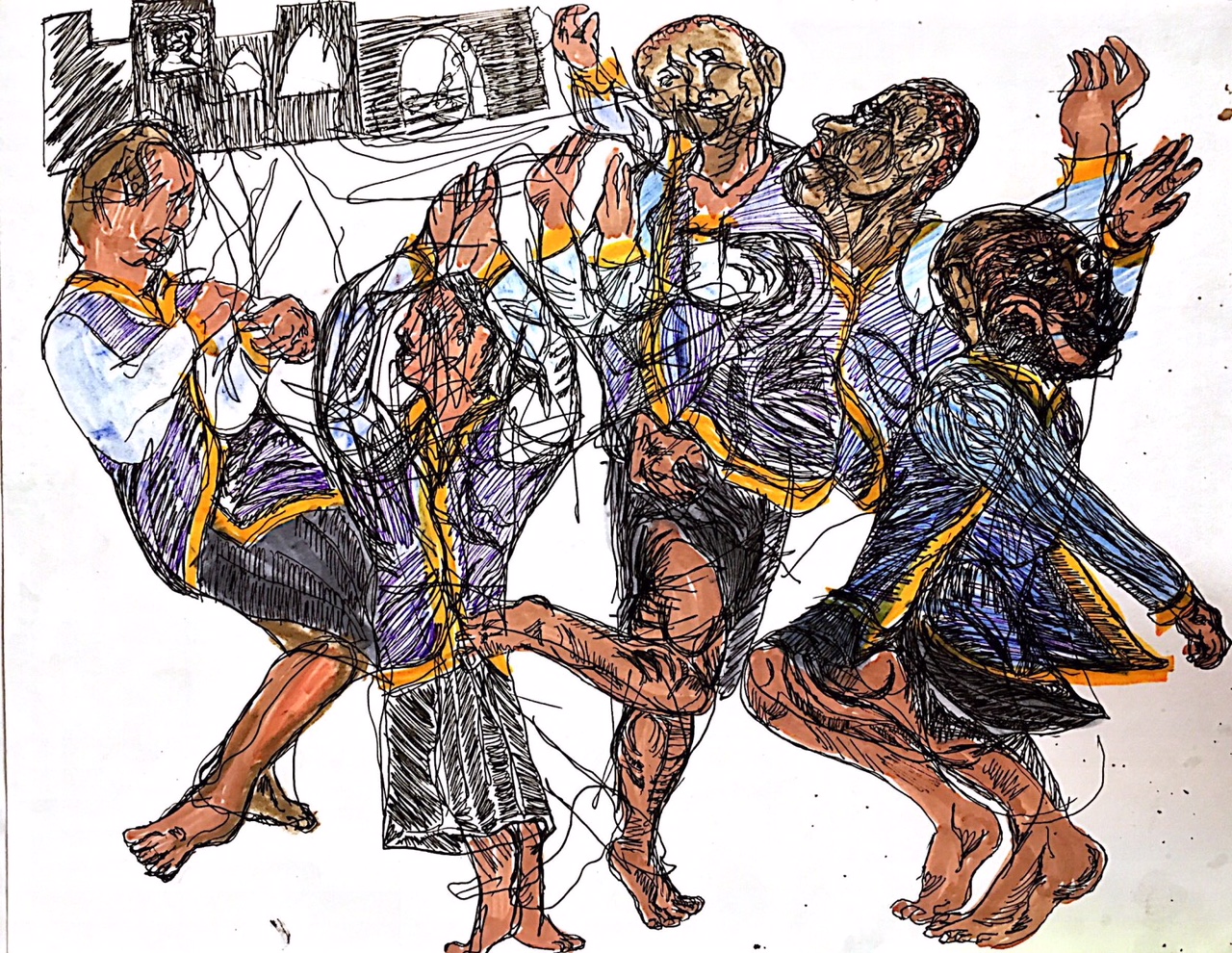 CAEN AMORE was performed at The Kitchen in New york after appearing at FringeArts in Philadelphia. The fun house stage set, and interaction with the audience demarcated by a long piece of cloth with jewelry sewn into the pattern bordered a gaudy sideshow. Avante-Garde, experimental artists established The Kitchen in 1979 during a music festival called “New Music New York.” The energy of artists shared an unseemly sound for that time. Now, Crossing The Line Festival and the Fringe Arts festival continue to expand a global perspective. For example, the audacious reception by the Coasters broke the scene with the song LITTLE EGYPT. This motivation for CAEN AMORE stripped down the hoochie-koochie style to reveal laughter followed by pain. 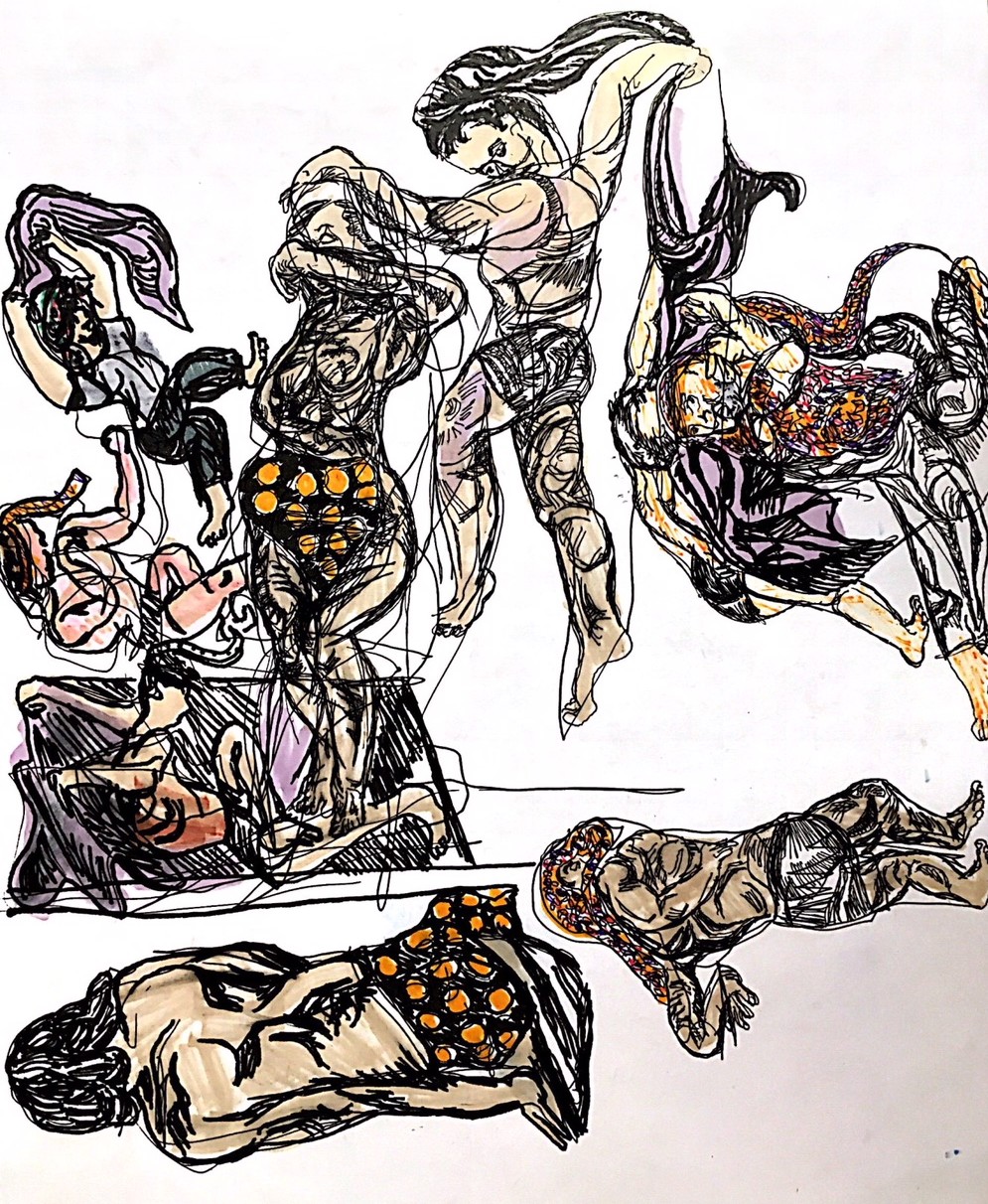 CAEN AMORE welcomed the audience backstage, where I got the chance to do some sketches behind the scene. The positioning of the hoochie in the front and the koochie in the back brought to mind the sexualized dance of belly dancing. Their joyous rampage was entertaining with curves of the body, The stage flowed horizontally with every dancer’s entrance, a new outfit adamantly clung to the dancer like paper dolls.
A modern approach to the hoochie-koochie style dance places historical significance on the ambiguous entanglement with public displays of affection, desires, and pleasure. The material love was expressed by the piece of clothing they held in their arms. It restrained the dancers’ movements to only be able to sway with the loose clothing. This effort to keep entertaining the audience conveyed an uneasiness in the boo-bop tradition. I believe Harrell was elaborately dissecting the way we hold on to classifications in society. It was a product of being empty handed. There was an excitement indifferent of the counter-intuitive movement . The fantasizing about the naked body seen through the clothing they were holding was daring the audience to lay their eyes on their curves. Part of it felt self absorbed, but the movement was relentlessly jumping out of a gaudy scene. 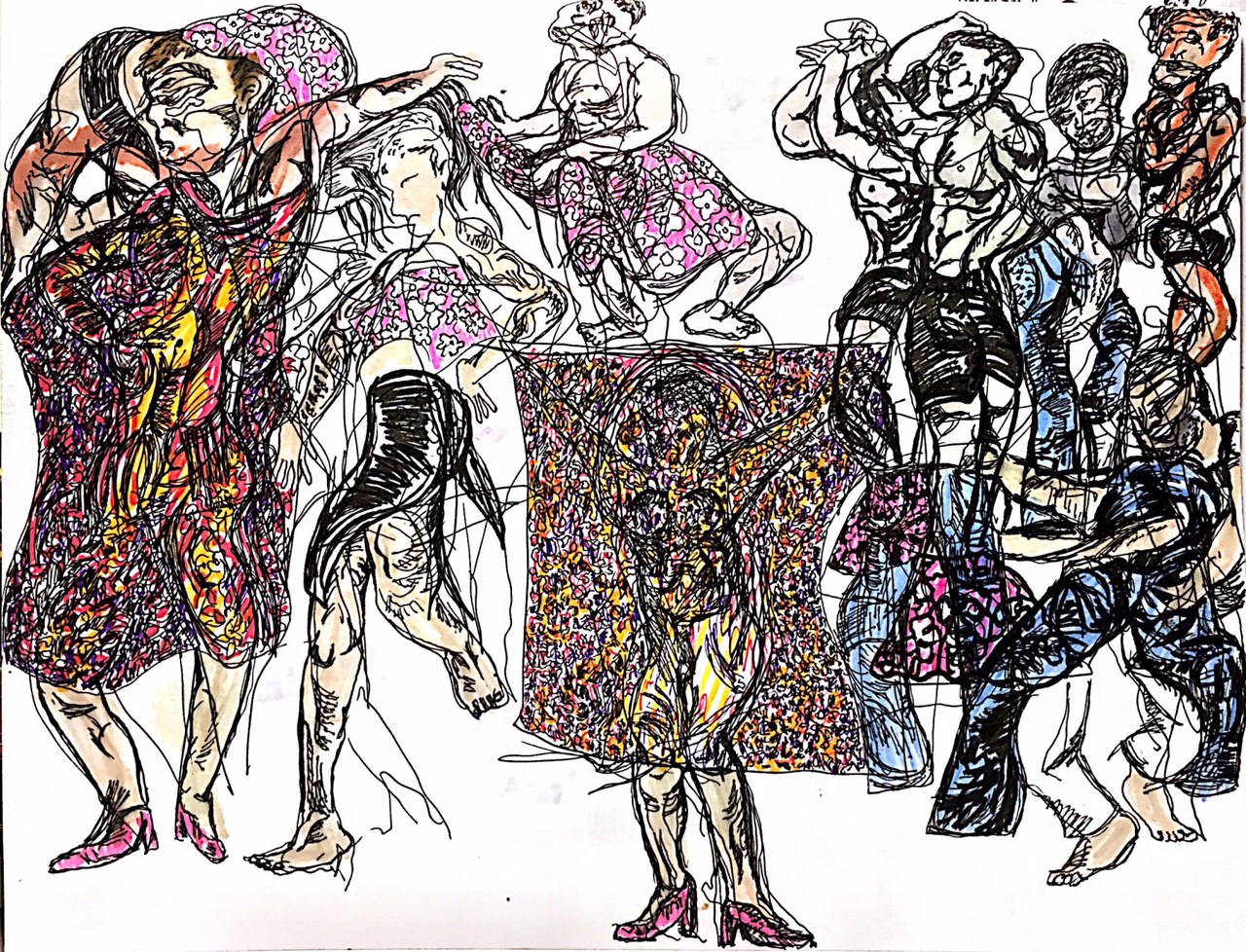 The irony in the acts of caressing, folding and bending the body communicated a vogue that blurred the lines of gender roles.The back of the stage showed the unfinished side of the set with a mirror for the dancers to check themselves out, and an archway looking out into the audience. Under the pointed archway Thibault Lac first came out in a wretched appearance, and introduced a separate piece called “The Ghost of Montpellier Meets The Samurai.” There was a transition from the visual cruelty expressed by his contortions to a parade of men getting dressed and undressed. The hoochie-koochie male personae was under a sarcastastic light, but the female body exposing it all was a mode of communication that defied the male projections and archetypical gaze at the female body. Perel Polumbe modeled in a motionless pose backstage or completely covered like a ghost. At the front of the stage Ondrej Vidlar with a scarf around his head made us reinterpret the facade of masculinity compared to a flamboyant pink flower skirt with a balloon erection concealed between Lac’s legs. The doo-bop movement of Little Egypt was the impetus for criticizing a conservative couture. On stage was a gestalt: clothes hung on a line off the side of a colorful facade. The rollicking men in line with a conveyor belt contrasted with the transparency of Polumbe in the fabric of society. The dancers overextended themselves to explain what has happened without our knowledge – the censorship of the hoochie-koochie style.