By Toby Zinman (aka Dilettante at Large, aka DAL. If we haven’t met before, this is my alias/disguise when I’m writing about matters other than theater, Read other DAL pieces. 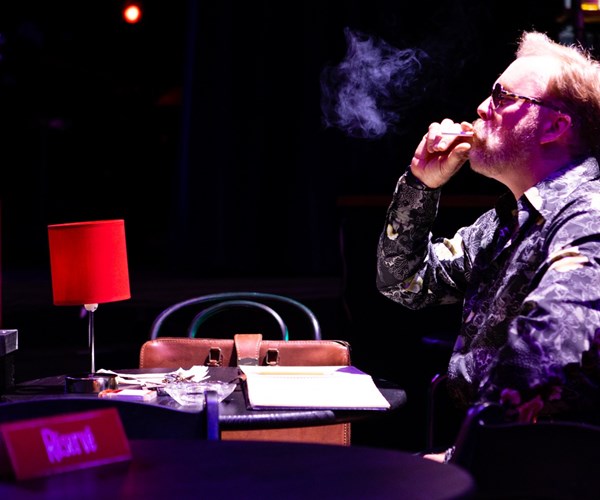 The title, which in French is ordinary telephone-speak and means, merely, “Hold on,” takes on larger and sadder and more ominous meaning as its context reveals itself.

The evening’s program is based on French playwright/filmmaker Jean Cocteau  La voix humaine (you may know Cocteau’s spectacular film, La belle et la bete—Beauty and the Beast).  The  only character is called Elle (“she”), a middle-aged woman whose five-year-long love affair is ending in a long, desperately sad phone call. We hear only her side of the conversation, but the banality of the situation makes it easy to imagine what he’s saying.

Now to try to sort out the complications: 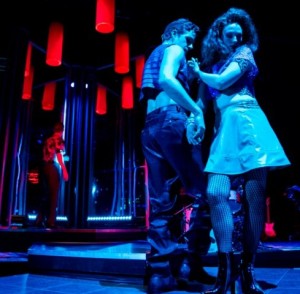 Francis Poulenc composed a solo opera based on Cocteau’s play; Cocteau wrote the libretto. The music is interrupted by their phone call being interrupted by a woman on a shared line and the unreliable telephone connection so that they are repeatedly disconnected, making this desperate woman even more frantic each time as she waits for him to call back. In a black silk slip and a leopard coat, in backless heels with a blonde coif, she is the image of hopelessness, especially as we begin to realize the man on the other end of the phone is likely much younger than she is. That all this takes place in a tacky night club—the old Theatre of the Living Arts (TLA to old-time Philadelphians)—it was a clever choice of venues since “tacky night club” isn’t much of a stretch for the TLA.

This opera is sung by Patricia Racette whose soaring passionate soprano is thrilling; we feel her alternate between resignation and despair, between her vows to be strong and her suicidal longings as she fondles a container of pills. The power of the piece comes from Racette’s acting as well as her voice, and the contrast between  the extreme heights of the operatic with utter banality of the situation underscores Elle’s pain. Racette is accompanied on the piano by Christopher Allen.

But wait: there are more and more complicated and complicating complications:

La voix humaine—the piece the opera crowd came for— begins in the middle of the evening’s program; the night  actually begins with an play/opera invented by the show’s director, James Darrah, using Poulenc’s music and adding poems by Apollinaire to Cocteau, calling it “A Reimagined La voix humaine.”  The link between the two defied my attempts to cobble them together, other than as a comment on the rude vulgarity of the contemporary in contrast to the very human, civilized voice of Elle.

Part One begins when the club is dark, the manager (Ames Adamson) is annoyed, the berated pianist is silent. The manager leaves. A trashy-looking couple (Mary Tuomanen and Marc Bendavid) burst in, dash around stoned and insist the young man (Edward Nelson, a strong, fine baritone) they have hijacked  and dragged in to play The Game. It is predictably of the Bondage and Discipline variety; the especially startling moment, after a pause for a Magrittian tableau (let no famous French experimental artist be ignored) arrives when the boy and girl reappear in each other’s clothes.

The lighting (designed by Pablo Santiago) is sensational, breaking the gloom with alarming flashes accompanied by a terrible noise.

All told, an exciting musical evening, just as the city has come to expect from Opera Philadelphia,

[Opera Philadelphia at the Theatre of the Living Arts, 334 South Street] September 22-30, 2018; operaphila.org