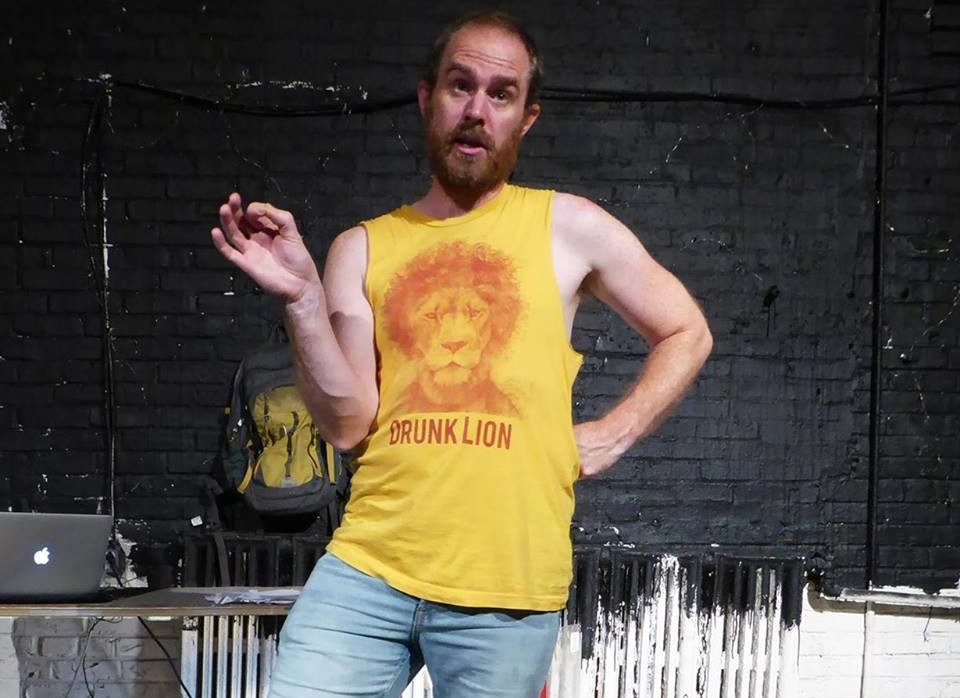 Natural born performer and Fringe Animal Chris Davis’s habitat lately is a bare, old, and empty performance space out in the warehouse wilderness of Southwest Philadelphia. You can’t just happen to encounter the shows there. If only THE PRESENTED and other shows at this site were performed in convenient Center City locations where they could attract the bigger audiences they deserve. Davis’s performance lasts 50 minutes, several of which are spent “waiting” while he holds off for Geoff Sobelle, “The pinnacle of Presented Art,” to show up. Sobelle is to be the featured guest audience member, someone who, although Curated, remains true to Real Fringe.

Playing himself as a character, Chris Davis pulls us in explaining what he’s doing as he goes along. Although humor abounds, this is not stand-up but the performance of a solo artist. He relies on his own resources—creativity, guts, humility, and boundless energy. Written by Davis and directed by Mary Tuomanen, it’s part memories, part imaginary world, part nonsense, part theater philosophy, and all compelling. He mines his rejections for comedy fare—he’s the guy Ars Nova doesn’t even know exists. It comes across a bit like Rodney Dangerfield’s old lament, ”I don’t get no respect.” The goal is to become Presented. The alternative to Presented Theater is dubbed “Unpresentable.” Substance rides under the silly business. In a Jason Kelce-type rant— about art, not football, he concludes that “The hardest art to see is the art that’s not seen as art.” With his talent polished (in a characteristically rumpled way) by years of Fringe solo work, Chris Davis has surely come into his own, an exuberant and irresistible Rumpelstiltskin who spins his own life’s straw into gold.