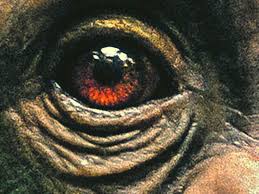 There is no more special honor than to be thrown a birthday party, after all one “can never stop someone’s birthday, even if you kill the person”.  Zacherle (Rick Horner) is a superfan for Dr. Zira, a scientist-chimp played by Kim Hunter who aids Charlton Heston’s “misanthropic astronaut” character, Taylor, in the 1968 movie Planet of the Apes. Zacherle invites us to his house to celebrate Kim Hunter’s birthday on November, 12, 2013 (11-12-13), a day of sequential significance.  The event goes according to plan until his daughter Lilith, played with wicked joy by Brittany Holdahl, decides to bring home uninvited guest Ross (Lucas Nguyen), or as we come to know him best, Bright Eyes.  Bright Eyes is treated as an intruder, but he soon becomes an essential party player who is, shall we say, choked to join the festivities. What follows, from creatively devised Planet of the Apes re-enactments, a Charlton Heston impersonation challenge to postman bashing (literally), sets up unexpected plot reveals and a Kim Hunter birthday celebration like no other before.

Through skillful, comedic writing from Joy Cutler, original music by Beth Custer, and a cast that hooks in the audience from the first musical cue and tortured scream, HAPPY BIRTHDAY KIM HUNTER combines audacious humor with concise storytelling. Hints at monkey torture aside, hopefully this play will appease our future ape overlords and have them grant us mercy.  Smurf-hating humans who have such devotion to scientist-chimps can’t be all bad. [Church of the Crucifixion’s Parish House] September 18-22, 2013, fringearts.ticketleap.com/happy-birthday-kim-hunter.