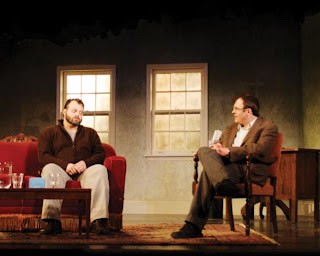 The past year has seen some great stagings by Irish playwright Colin McPherson in Philadelphia. The Arden’s brilliant Seafarer was followed by a stripped down performance of The Weir by the West Philly-based Curio Theatre. These were both good shows, ensemble pieces which showed the talent of the respective casts, but they are now overshadowed by Theatre Exile’s superb production of McPherson’s Shining City, on stage until April 21 at Plays and Players Theatre.

The play’s heart is a series of rambling but deeply moving therapy sessions between priest-cum-psychologist Ian (William Zielinski, who also had a great turn in the Arden’s Seafarer) and recent widower John (Scott Greer), who in true McPherson fashion remains haunted by his wife’s ghost. This “perfect pairing” (Philadelphia Inquirer) give “bravura performances” (Broad Street Review), with Greer in particular giving a “powerhouse performance” “worthy of a Barrymore” (Philadelphia Weekly). Critical praise has been effuse: “near-perfect combination of simplicity and breathtaking assurance”, “great theater” (City Paper), “a taut, unpretentious production” (PW). And rightly so, this is one of the finest Philadelphia productions of the season, the best interplay between two characters seen onstage here for a while (the last comparable piece we remember was the Arden’s “Rosencrantz and Guildenstern”, and that was almost a decade ago), and the finest Theatre Exile show we’ve seen.

Credit Theatre Exile and the “masterful direction” (City Paper) of Matt Pfeiffer for putting this great production together.
—Christopher Munden

Other Recent Reviews:
3/10/10 Shakespeare in Philadelphia: The Arden’s Romeo and Juliet Introduces a Season of the Bard (philly2philly.com)