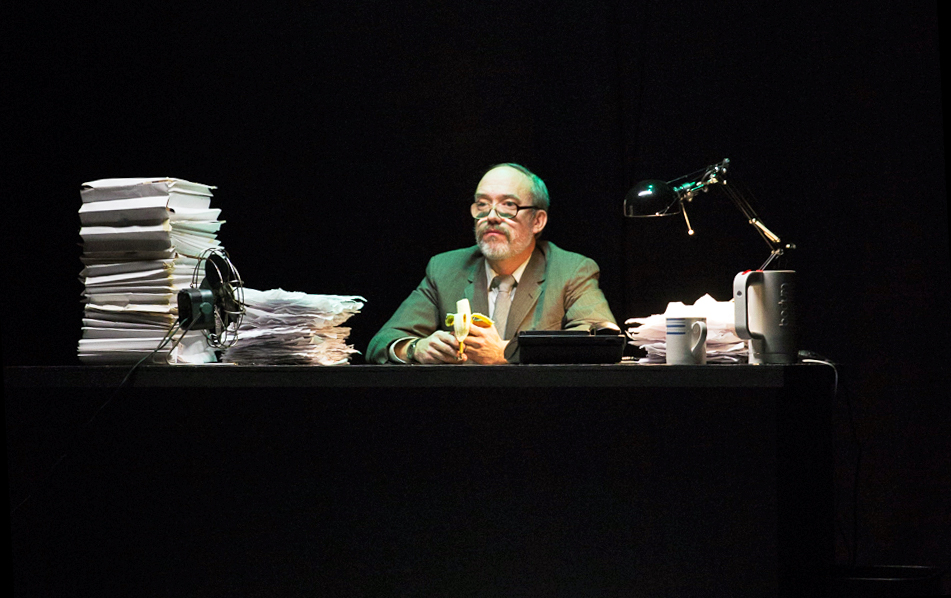 Do the math. That’s what accountants do, right?

The show is 75 minutes long.

I looked at my watch about ten times, from which we can deduce by simple arithmetic that my boredom threshold was only 7 1/2 minutes long.

From which can deduce, by simple logic, that this show is tedious, self-important, and desperately obvious in its existential “meaning.”

The trope is that people have dreadful jobs which waste their lives and stunt their souls. This is the tritest of tropes.

Trey Lyford both conceived the show and plays the central figure, a silent middle-aged man wearing a gray suit, a gray shirt and a gray tie. His hair and beard are gray. He sits silently behind his desk flanked by the inbox from hell, piled high with papers. We watch him stare at us for many minutes while faintly twittering voices are heard in the background. (The sound design, also created by Lyford, is deep disturbing; a musician, offstage but visible, occasionally plays a trumpet.)

Just in case we didn’t get it, the grim tedium of the accountant’s life is demonstrated by his attempt to call some office and request a form. We hear one of those unbearable menus of phone choices; this goes on for many many minutes as we remain on hold with him. A few people in the audience laughed, as though this was news to them. Finally a voice emerges from the speaker phone and waxes poetic about sunlight. 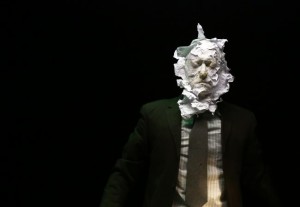 There is a moment with a banana, peeled and eaten with great deliberation. (Wham, bam, thank you Sam: this is stolen right out of Beckett’s Krapp’s Last Tape, although that is the only similarity to that geniused play). There are a couple of nifty tricks with fruit (Eric Novak designed by the set and the kinetics, which I assume means nifty tricks with fruit). There are gruesome moments involving a fan. The lighting (designed by Robin Stamey) is predictably creepy.

The show is suddenly jolted by the appearance of the accountant’s boss (Ben Bass) who rants about his alpha male status and performs a surreal dance, both ugly and terrifying. A young girl (Coralie Holum Lyford) appears as a memory? a longing? a vision of a lost capacity for pleasure and innocent fun?

So what’s the story: Are we watching someone crack under the strain of an awful job? Are we watching an indictment of the contemporary workplace? Since there’s no real insight there, I suspect what we’re watching is an actor showing off, saying, look how interesting my job is, look how I can make a large group of people pay attention to me.

CPE for Accountants from the Center for Professional Education, Inc.

One Reply to “THE ACCOUNTANT (Trey Lyford): 2018 Fringe review”