A common refrain in the world of workplace woes goes like this: “People don’t quit jobs. They quit managers.” This is undoubtedly true for the handful of jobs I’ve left. It’s a given that almost every occupation features the same garden variety annoyances as any other. It just comes down to how well the worker is equipped to deal, which typically comes from way the company is run, and the attitudes of those running it. Even the most surface-level demeaning jobs become tolerable when the employee feels necessary. The opposite is true as well. What appears to be a dream job may only be that way to outsiders.

Andrew Bujalski (Computer Chess) has kept this notion at the center of his latest film, Support the Girls, which follows a single turbulent day in the life of Lisa (Regina Hall), the manager of Double Whammies, a Hooters-esque sports bar on the side of a Texas highway. Granted, working at such a place is hardly an ideal source of income, but somebody has got to do it, and Lisa has made it her thankless mission to make sure her team of servers – all of whom are required to expose some skin and lightly flirt to upsell beers—are treated with respect by both the customers and the restaurant owner, Cubby (James Le Gros), even if it means putting her own problems on the back burner for a while. 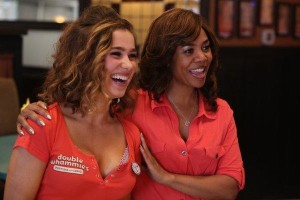 Things aren’t easy for Lisa. She’s short staffed due to the actions of an impulsive employee. The cable is out due to a sloppy break-in. She’s got problems at home of an ambiguous nature. And above all, she just can’t help herself but to go out of her way to assist those around her. It’s no wonder she begins the movie in tears.

But the tears end there. Lisa has a job to do, and way too many people rely on her to get it done.

In the tradition of the best “a day in the life” movies, Support the Girls is plotted in a way that puts its characters at the behest of their circumstances without absolving their actions of consequence, both good and bad. This gives Lisa a solid arc—that of losing and regaining control, often finding strength in unexpected places – and it allows for the thematic/moral concerns to manifest naturally.

Regina Hall really should be a household name by now. She is never not the best part of any scene she’s in, and this goes for the entirety of her career. Be it comedy, drama, or even a thriller like Philly-shot Law Abiding Citizen, Hall is always a welcome addition to any film, and it’s great to see her carry one as suited to her talents as Support the Girls. As Lisa, she is tasked with exhibiting quiet fortitude in one moment, justified anger in another, and comedic playfulness in the next. She runs the gamut fluidly and with such genuineness that I wonder if the film was written specifically for her. Furthermore, I wonder how much of what she does is even on the page at all.

Same goes for the supporting cast, which includes Haley Lu Richardson as a server who gets a little too comfortable with the customers, Shayna McHayle as a young mother who doesn’t suffer fools, and Lea DeLaria as Bobo, Double Whammies’ one female regular – the one customer who could be said to care about the well-being of the staff almost as much as Lisa.

At a lean 90 minutes, there’s not much room for fat on this one, and as a result, character depth must built through performance, making this a real blast to watch. None of it feels too heavy in the moment, but by the time we reach the primal scream of a finale, the thematic weight becomes clear as day: support those who are giving their all.

“I can take fuckin’ up all day but I can’t take not tryin’,” says Lisa to a troubled friend.

I’m reminded of a story from back in my days as a restaurant worker. In discussing my job with a particularly chatty customer, I made some sort of self-deprecating comment which exhibited shame in my occupation. The customer’s supportive response always stuck with me: “I never hate on anyone’s hustle.”

He was right. There’s no shame in putting in a honest day’s work, but there’s plenty of shame in failing to respect oneself—a message that Support the Girls puts forth with gusto.