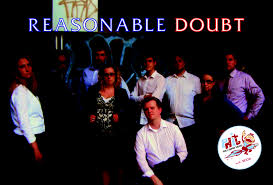 Philly Improv Theater has a great concept on their hands with REASONABLE DOUBT. They start off with one suggestion from the audience. From there the cast recreates an entire court case, cross-examining witnesses, addressing the jury, even acting out the original crime. In the end, twelve audience members decide whether the defendant is guilty. Unfortunately, the actors don’t successfully translate the concept into reality, which is a shame, because this is a funny cast.

They elicit enough belly laughs to make the show worth your while, and a few do it with barely a word. But too often, one person establishes the reality of a scene, only to have another actor ignore all that and try to build a scene of their own. Some of the cast are fast on their feet and good at fixing thing, but any progress they make towards creating a world usually dissipates, because someone else reflexively goes for the wacky option. If they can slow down, take a breath, and give some space for their punches to land (and stop already with the open-ended questions!) the cast might even take this show up to 11. [Mainstage at the Adrienne] September 12-15, 2013, fringearts.ticketleap.com/reasonable-doubt.