The SoLow Fest performances of different mediums and art forms on June 23rd showed dance, theater, and comedy. The drama of corporeal, existential, or laughter captured by these participating artists brought life to art, and art to life. I sketched Curio theater, dance artists at Ballroom Philadelphia, and Anders Lee at this years SoLow Fest. 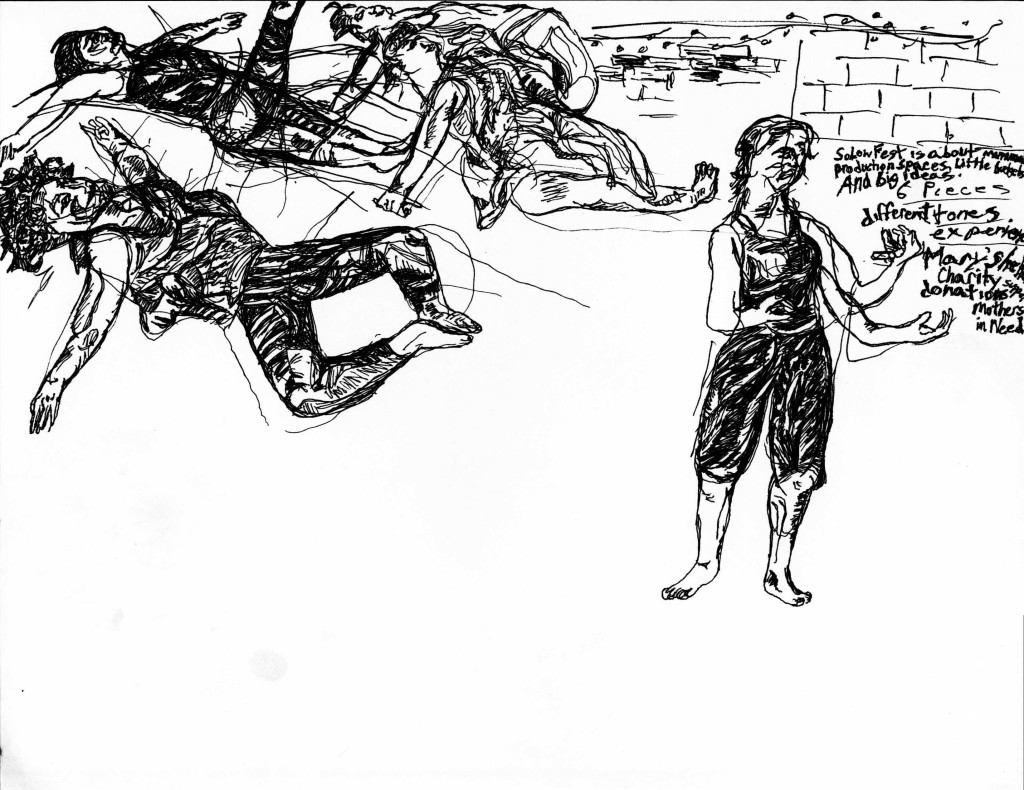 Little Things by Jessica Warchal and five solo performances interpreted the relationship of mother and children. Brandi Ou’s piece was called “Fluidity.” While we focused on what it meant to be a woman, there were trials with emotional tones which engaged a corporeality. Such as, Grace Stern’s “Benediction,” or Evalina “Wally’ Carbonell’s “Corridor.” Passing through life’s obscene discomforts pieces together faith or accidental moments pin point the adventure and beauty of raising children. 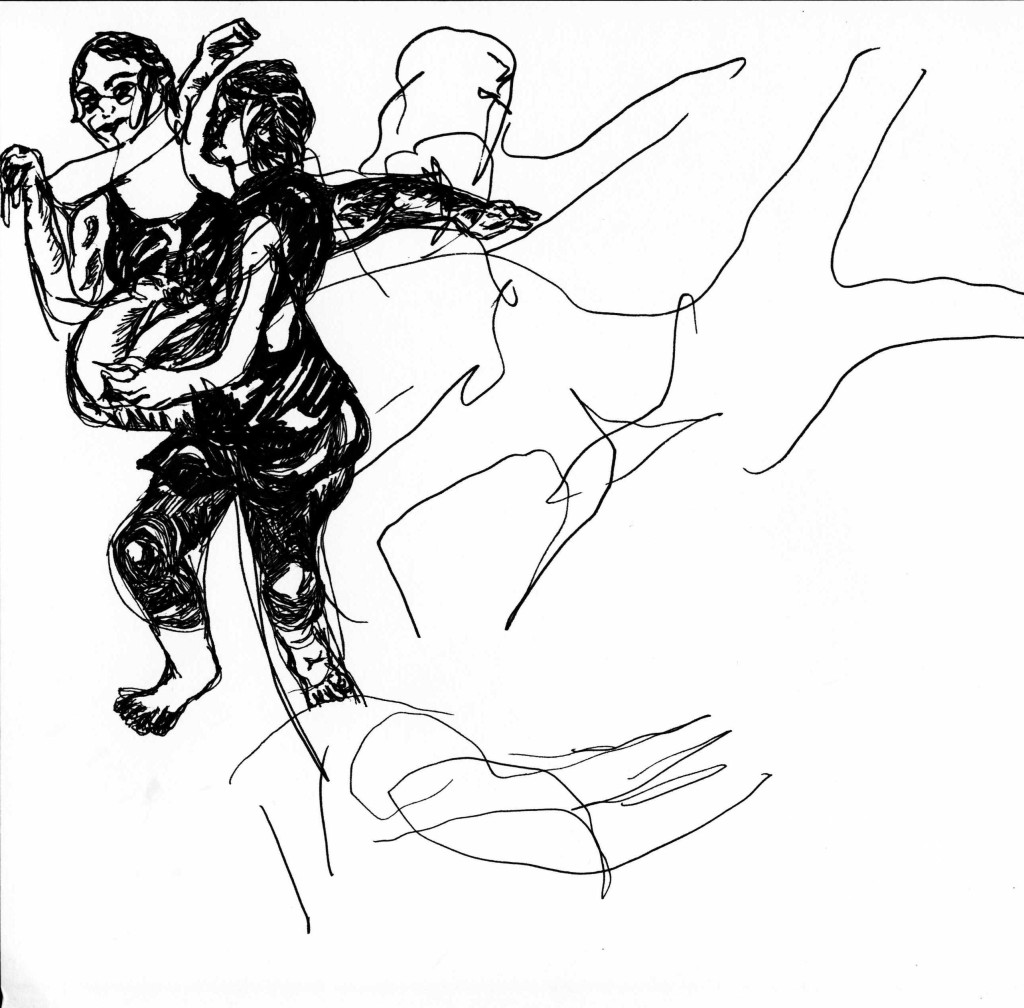 Warchal stood on one leg and her balance reflected the mosaic quality of stained glass. The importance of the many sacrifices with gratitude from motherhood was apparent in the poem “Ser Una Abuela/ Being a Grandma,” by Maria Guzman. It was not an act, and dance correlated with the unspoken bond between mother and child. The corporeal movements and journaling of bringing life into the world came together in the last dance, Installation #3:B by Rhonda Moore. 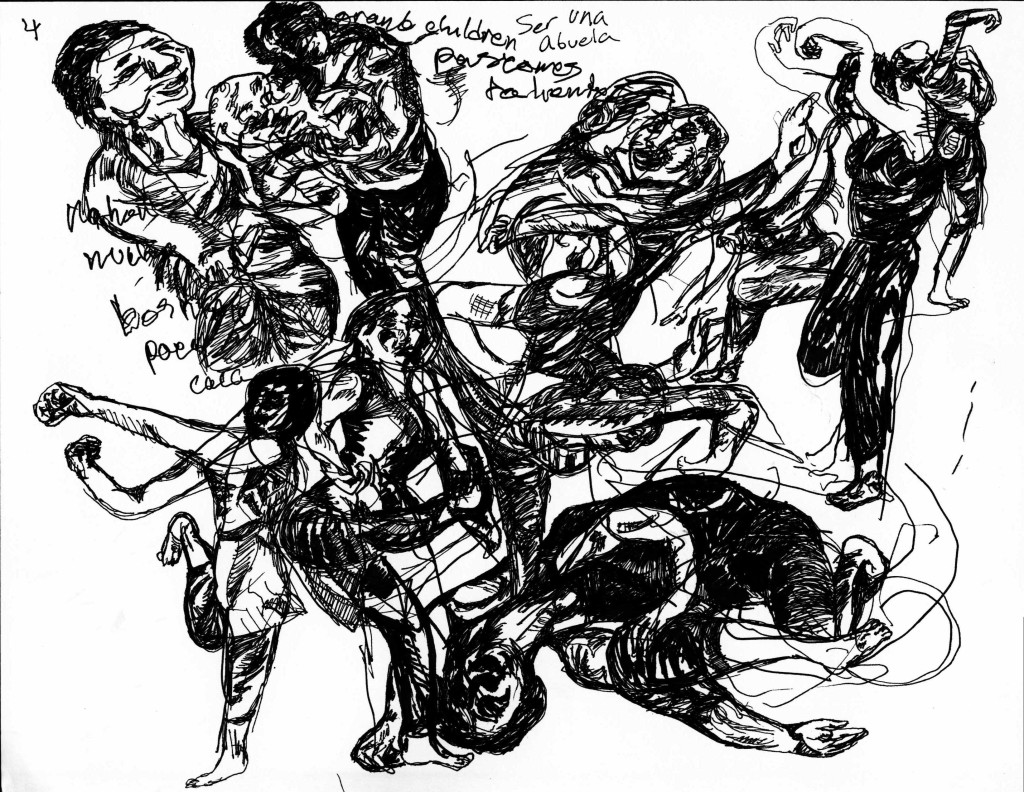 Following up with the Curio Theater in West Philly, actress Tessa Kuhn played a young enthusiastic photographer in Francesca: I Was Or Am. In late 70’s and early 80’s, Francesca Woodman performed and shot photographic work that visually explored the female body. Her father was a well known American ceramist, painter, and photographer. 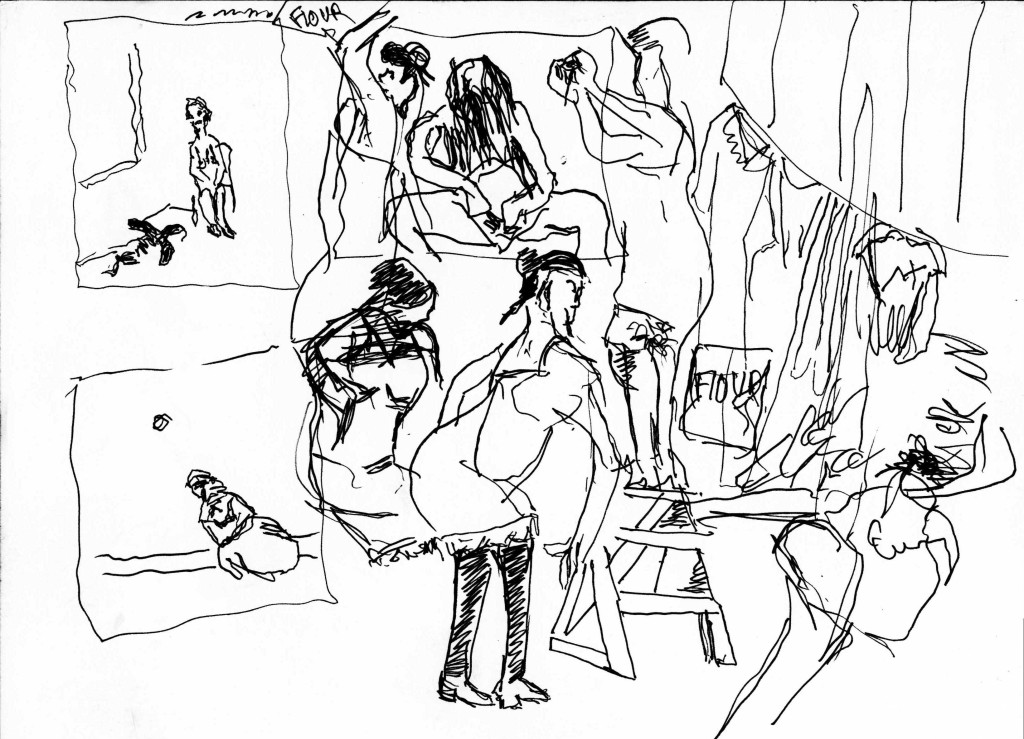 A tripod at the front of stage right fixed a camera on the realistic set of an artist’s studio. Echoes of a spirited creative life flashed by in moments of contemplation. SoLow Fest honors the courageous, and under valued artists by having short performances every hour exploring the theme, Stranger Things Have Happened. Francesca: I Was or Am tacked on the flighty thoughts of a short but promising talent that died before it could really take flight. At a push of a button a photograph takes an instance of life and turns it into art. It holds up against time, something which would be last forever. 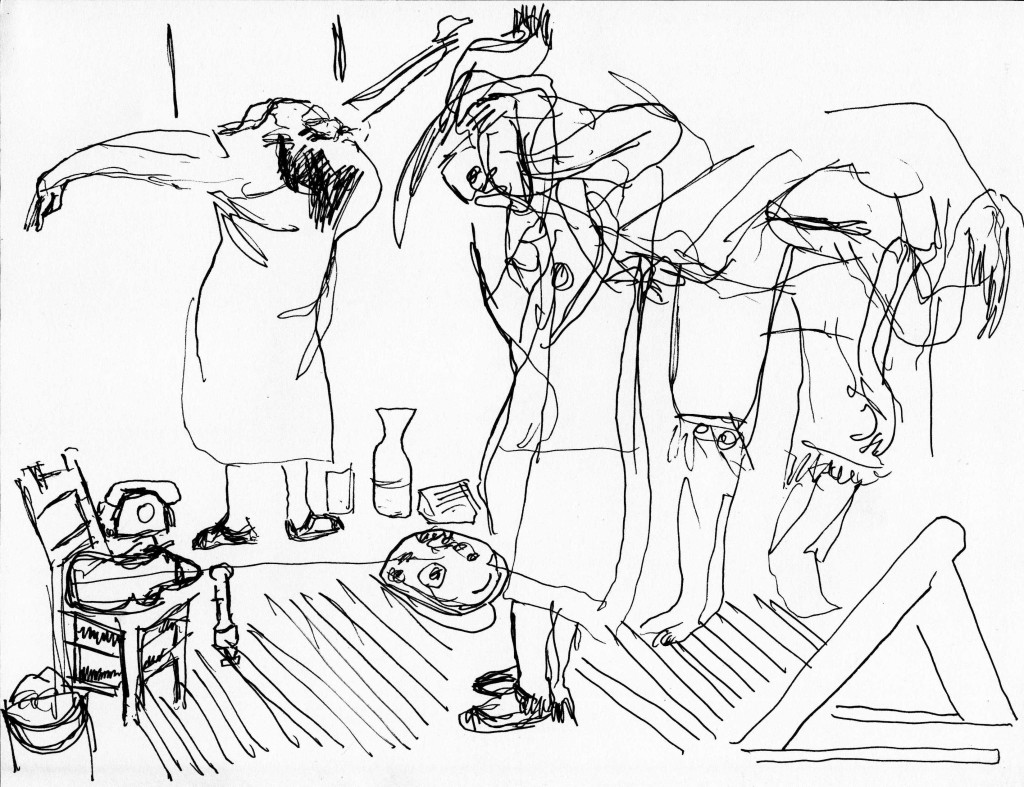 In another sense, we watched an intervention through sound and light. It was a look inside the creative act of the photographic work of Francesca Woodman. This angelic venting clashed with an outside world. A bigger world outside of the artist’s studio faced the artist with an existential crisis which would lead to her suicide at age twenty two. The transformation of Kuhn into Francesca showed a harmony when dancing, or running to the camera, and jumping out in front of it brought her out of her skin. Her wardrobe hung on a clothesline, and her mood changed, like a switch, by the clothes she put on or took off. For many of us, life is our own self- directed play. The photos by Woodman upon entering the theater charted the path that took place historically (1958- 1981). Why it came to a sudden end left bewildered feelings of happiness and death. A short play about the short life’s work in Woodman’s case delicately unfolded a dark secret and sweet whispers of the meaning of art. 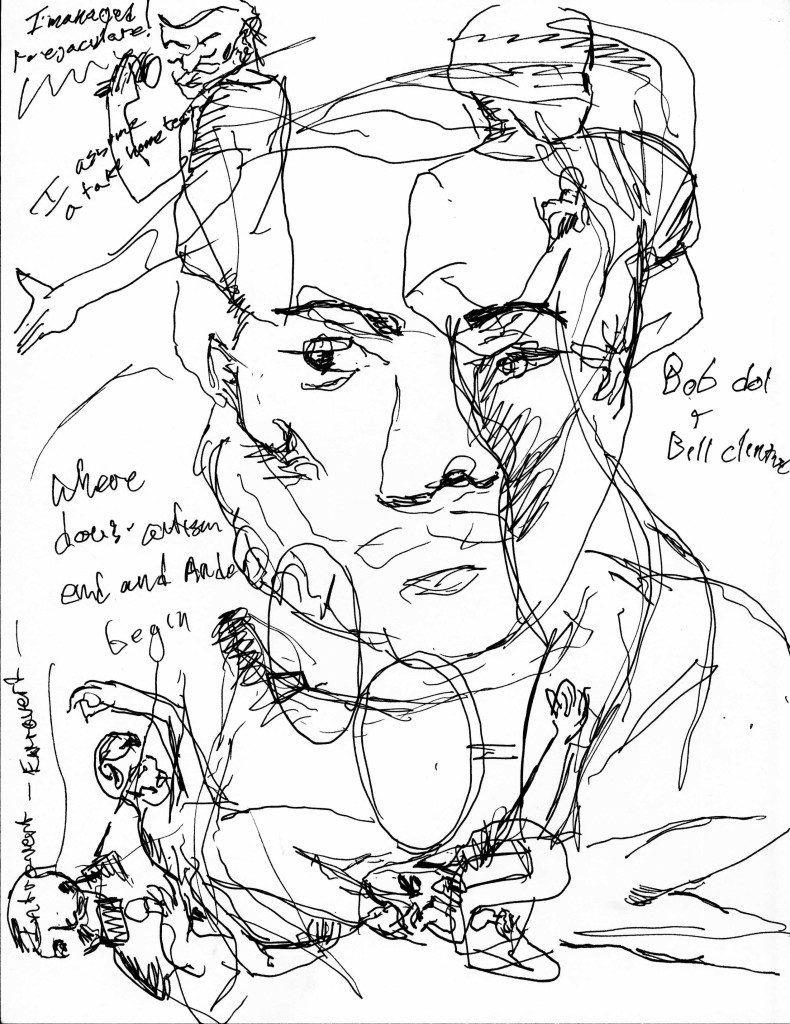 SoLow Fest’s day-by-day calendar for June 23 ended with Dummy, a late night stand-up comedy show by Anders Lee. Laughter brought out a subjective perplexity around a person’s abnormal behavior. Dummy analyzed the history of autism. Given what the doctors called a diagnosis became more and more of a limitation. This challenged the integrity of health care. The theory of a tectonic behavioral issue diminished intrinsic human trust. Only to defeat obsessive, awkward conversations. 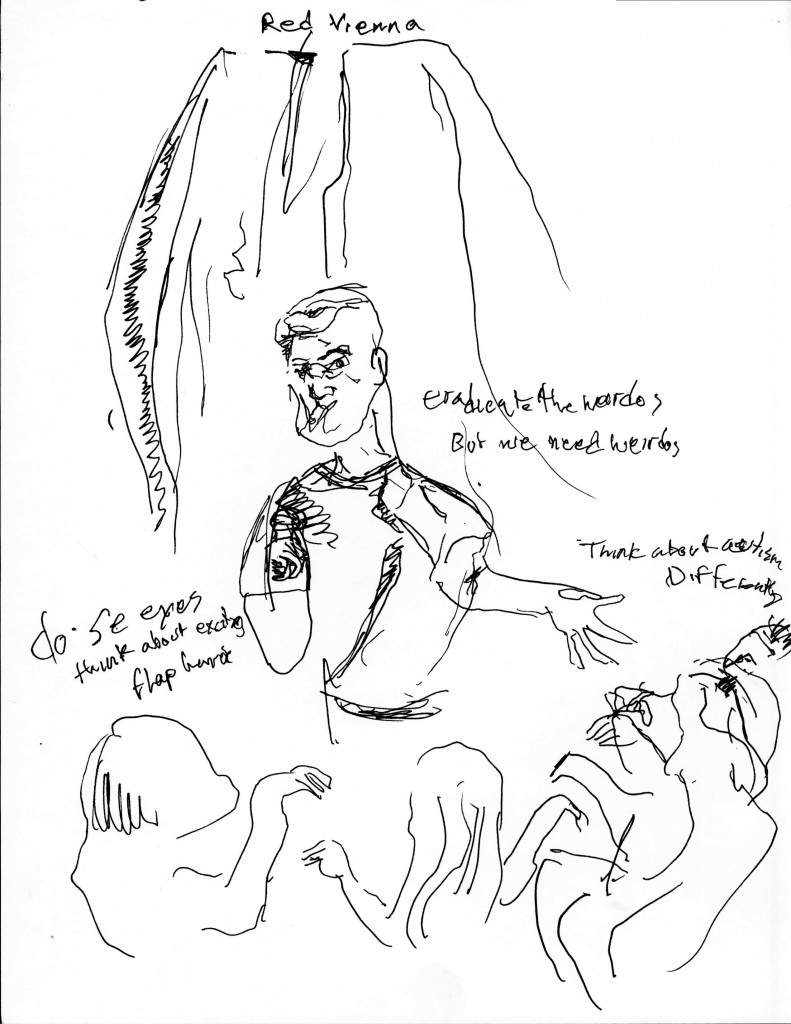 The event showed a curiosity for indifference between an “idiot,” and the doctor’s diagnosis, It was Anders’s research into self-medicating what the doctors believed. “Pervasive Developmental Disorder,” showed a shared anxiety, though these simple quirks would not normally impair most of us from any daily activity. The audience sighed with laughter because these simple impairments quickly evaporate by societal rule. It was Anders’s critique of an “atomized society.” This funny idea that everyone was the same fits into an ideal societies. In this case mistreatment took away a part of a person’s identity and replaced it with a new muse. In order to “eradicate the weirdo’s,” was only the beginning to a total extroverted reaction. Not funny, but considered an important piece to the psycho analyses. Anders worked in laughs about himself and where he came from. Freedom from a group reconsiders the identity with the group, and plays a unique part in a diverse community. Anders fits this question, what makes a person special, into a more hilarious scenario, “close your eyes, and think of something exciting while flapping your arms. Stranger things have happened than flying people, it looked weird to catch others around me doing the same thing, but it felt good.