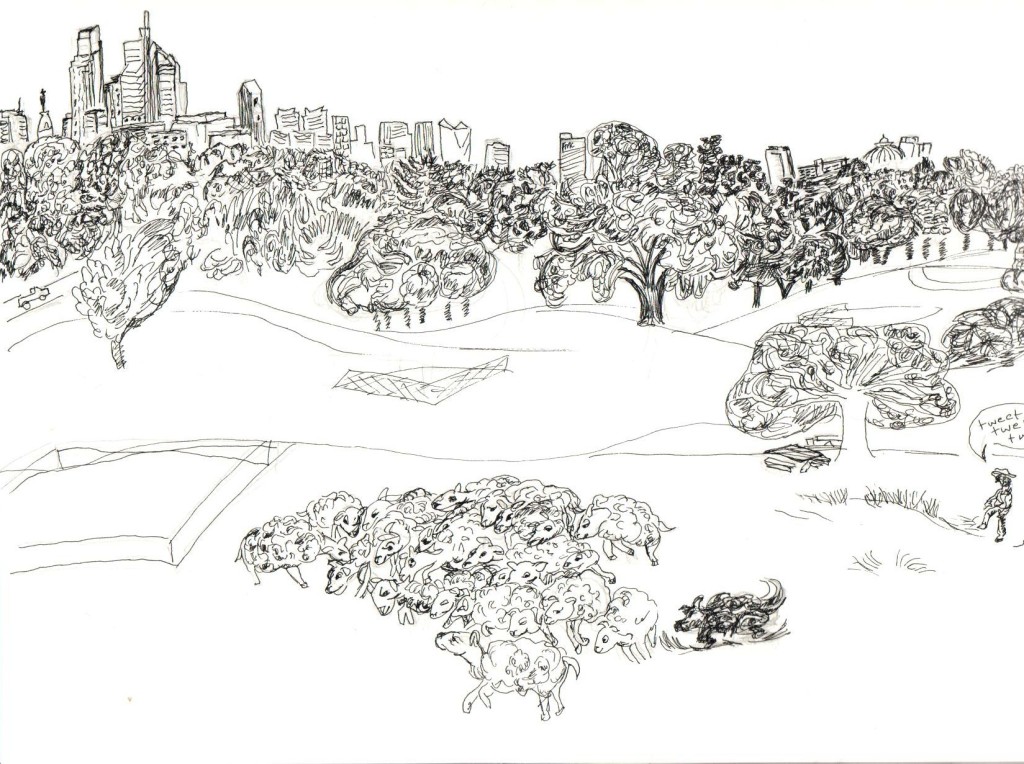 Doggie Hamlet presented by the Philadelphia International Festival of the Arts (PIFA) brought out friends, children, and couples to sit around on some hay stacks as sheep and four performers entered the penned in area. The view was a real spectacular sight of the city’s skyline from Belmont Plateau. Site specific theater was a new source of adventure for the Kimmel Centers biannual festival. I was ecstatic to see there one of Philadelphia’s great theater artist that is known for his site specific theater, Mike Durkin, of The Renegade Theater Company. Ann Carlson created Doggie Hamlet for a contemporary art performance that sounds and feels like every day life. This sounded interesting from the beginning, an adaptation of hamlet using sheep. It was not exactly that and it was a good thing. The feeling of being at Fairmount park, and the players with Diane Cox, “the woman that makes the world turn,”herded the sheep around the field. The sheep did what sheep do, they ate grass while trying to stay out of the way of any distractions. 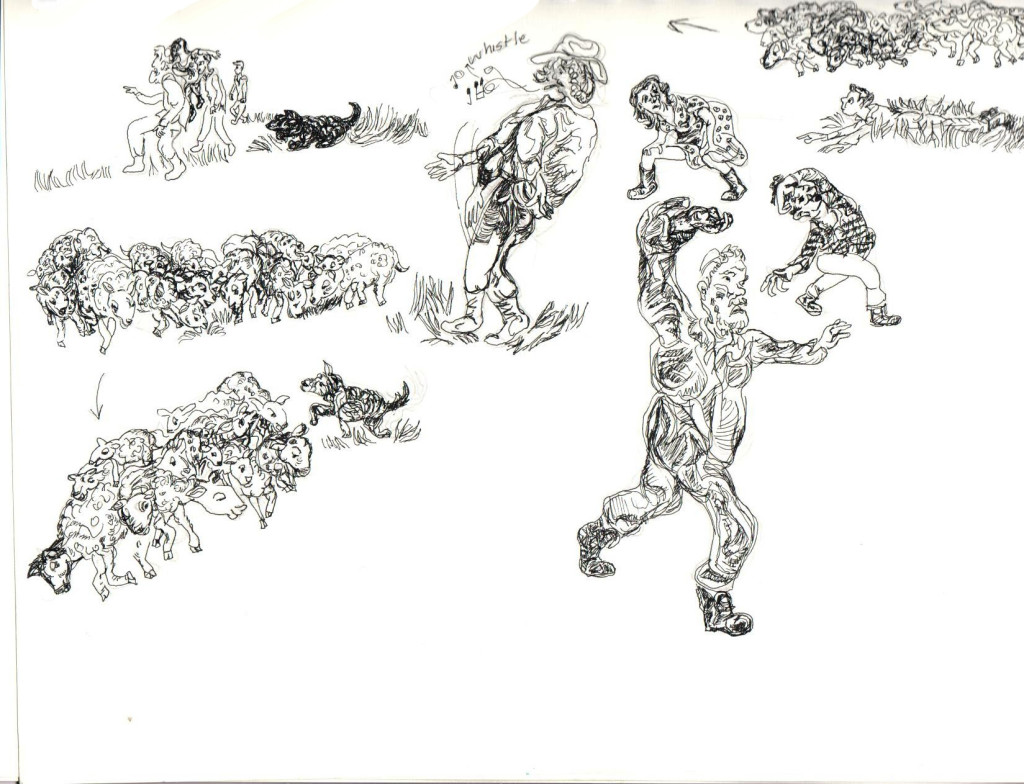 The form of theater has opened up new ways for the community and social practices to enter the stage. The stage is a magical transporting device that uses human imagination. The ritualistic characteristic of being in a field, rain or shine, and witnessing a family structure of a husband, Peter Schmitz, wife, Diane Frank, and two boys, played by Ryan Tacata and Hunter-To. They brought to mind Earth, biological activity, and environmental hazards. The difference in age amongs the players evoked a multi-generational dance. “We are just like you!” yelled Schmitz as he approached the sheep with a wool hide. Interaction between the sheep and the players was minimal. For the first five minutes, Philadelphia actress, Cathy Smith staggered out across the field with a blood colored costume with a trail of it behind her. This introduced a mood that would play out through dancing, and with fast movements the sheep would react by avoiding any confrontation. The emotional actors and the unconcerned sheep revolved around the the sheep dog, Wull. Animal lovers and dog owners alike would easily see how the connection of innocence and uncertainty followed a tweeting whistle when Cox’s trusty sheep dog would round up the sheep, or play along with the actors. 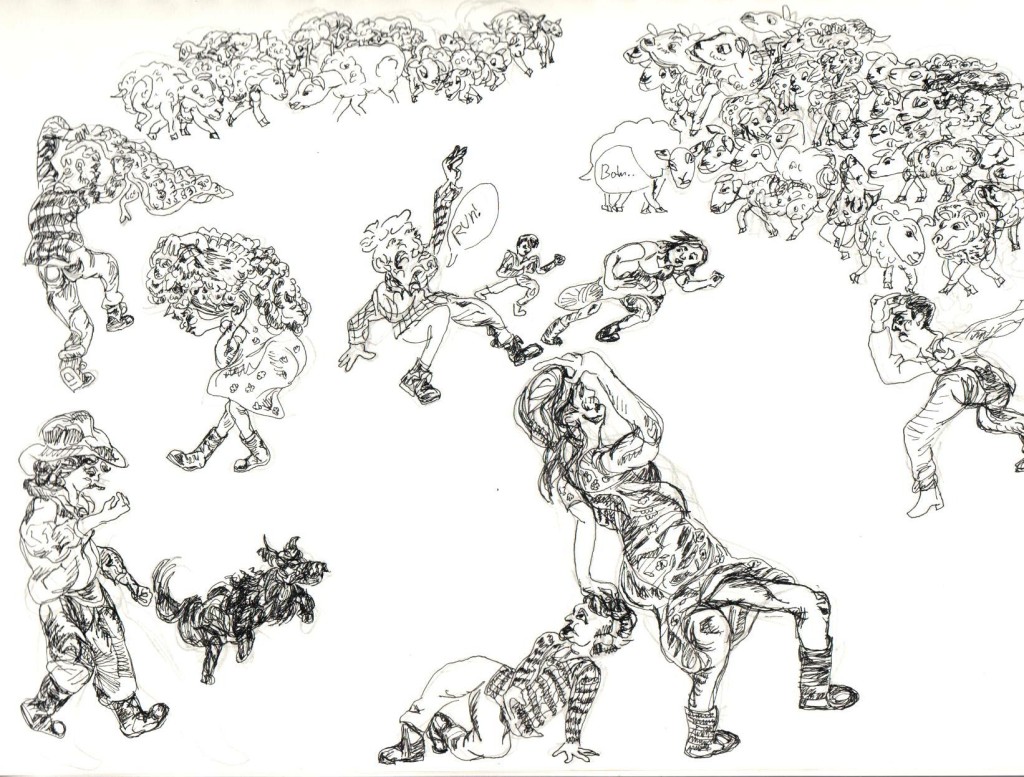 Dancing with sheep was metaphorical, and the whistle directed the action of the sheep dogs to lay down, move the sheep, or circle a lone sheep. The whistle made a tweeting sound barely audible, but this sound rings unpleasantly with some people when alerts like social media apps ring on their phones. News feeds that confront radical political decisions or constitutional rights make people react in the same way. Man’s best friend became a representation of the visceral meaning of Hamlet’s indecisive nature. The sheep were inseparatable, and constantly with their heads down. Finally, a bleeping sound, “bah, bah” answered the ridiculous activity of the actors. With only so many words a sheep confronted the environmental change that happened around them. A sign of remorse and tenderness brought the family of actors together. When they danced with the wool hides there was an ambiguity to the clothing we wear, and the camouflaging technique of the sheep with the natural landscape. Hiding underneath different fabrics and textures relates to various cultures around the world. Anne Carlson’s Doggie Hamlet incorporates animal instincts of the sheep. They stay in a pack only to look up occasionally to notice unconventional movements by the four players. Hamlet was the most desired role for an actor to show off his skills of capturing an internal conflict. Freedoms that constitute full mobility and mental stability contrast with Shakespeare’s most visceral role.