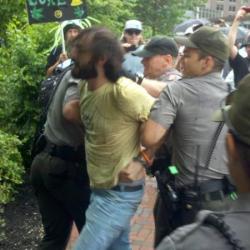 When the members of the Panic Hour talk about 9/11, reptilians, and the Federal Reserve, I don’t think they’re kidding. Imagine if Ron Paul wrote a musical for Glenn Beck and Joe Rogan—it would be FEDERAL DETENTION: THE MUSICAL. The bad news is, no seriously, it’s like Rogan got Beck and Paul way too high, and they started singing a libertarian-themed cover of the theme song to The Golden Girls. At least the show doesn’t pretend to be neutral. Expect loaded political newspeak (like insisting on “godfraud” instead of “religion”) and bizarre obsessions with overweight, gay, and Asian people.

Don’t expect a coherent show. The members of the cast should have clear marks to hit, but they don’t (I’ve seen cuckoo clocks with better blocking). They should know what notes they are supposed to sing. The projectionist should know which slides to project and when, instead of flipping through them right in the middle of scenes. Worst of all, the book is too ironically chatty to be effective agitprop, but is so sure of its own politics that it’s not credible satire either. It mainly exists to preach to the choir. People who like the idea of armed insurrection and those who yearn to hear new rhymes for “Marijuana” (Botswana!) will probably enjoy the show. [Underground Arts] September 11-15, 2013, fringearts.ticketleap.com/federal-detention-the-musical.