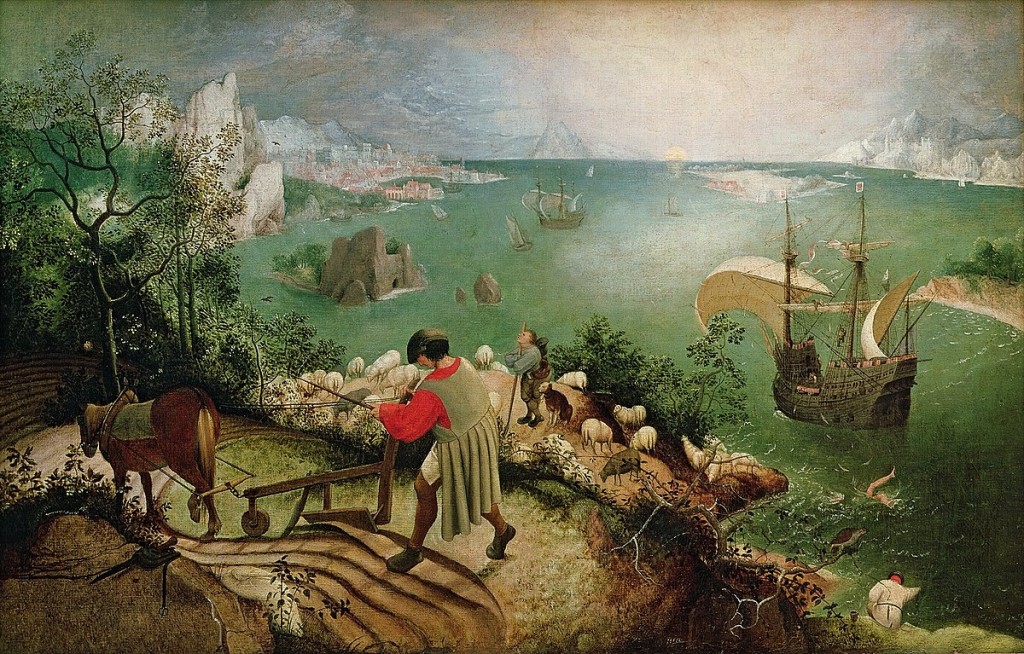 A huge panel of Pieter Bruegel the Elder’s Fall of Icarus, spans the entire stage before the show starts. It’s the perfect signature painting to introduce a brightly comedic story that has an accidental occurrence. To say HOPE AND GRAVITY is unusual would be an understatement. There are many good comedies out there, but not many where the weight of tragedy crests and wanes beneath the laughter. There’s been an elevator accident recently, and the elevator is the central connection in this play. Bright new music by Michael Kiley slides behind selected scenes. Crisp, fully appointed spaces appear and disappear as needed in the seamless wizardry of Jorge Cousineau’s set design. And his brilliant, inspired projections include images, titles and scrolling CAD architectural drawings. Digitized titles of vignettes glide up and down like an elevator, skipping certain floors and landing on others, serving as visual guides to where we are in the story.

Under the direction of Jennifer Childs, laughter ensues and tension brews as we await outcomes we know will be coming. But we don’t know exactly how amid all the laughs, lies, cheating, sympathy, drama, and disclosures. There are intriguing links between people, and sometimes consequences are shown before the precipitatingactions.

Most actors are double cast. David Ingram’s roles include an elevator maintenance man that the audience loves, and a sympathetic poet and professor, Douglas, whose mind is failing. In an encounter on the elevator he responds to “I don’t think I’ve ever met a poet,” with “Well, most of us are posthumous.” Actors Sean Close and Jessica Johnson, as students who are kind of engaged (since he gave her a ring box), have to keep the poet Douglas straight on who wrote ‘his’ poems. Gregory Isaac is a hoot as a pathological liar dentist at a self-help seminar. Suli Holum’s nurse is a piece of work, and in another role she yearns for motherhood. The acting is fantastic, but the double casting, factored in by design, adds a layer of complexity to an already time-fractured and multifaceted play. A couple of times I was confused, initially mistaking one character for another played by the same actor. But other than that concern, the connectedness in this show works like a charm. Of the seven Michael Hollinger plays I’ve seen, HOPE AND GRAVITY now tops my fave Hollingerlist.   [1812 Productions, Plays and Players Theatre, 1714 Delancey Place] April 26 – May 20, 2018; 1812productions.org

4 Replies to “HOPE AND GRAVITY (1812 Productions): “Even the lightest things come crashing back down to earth.””