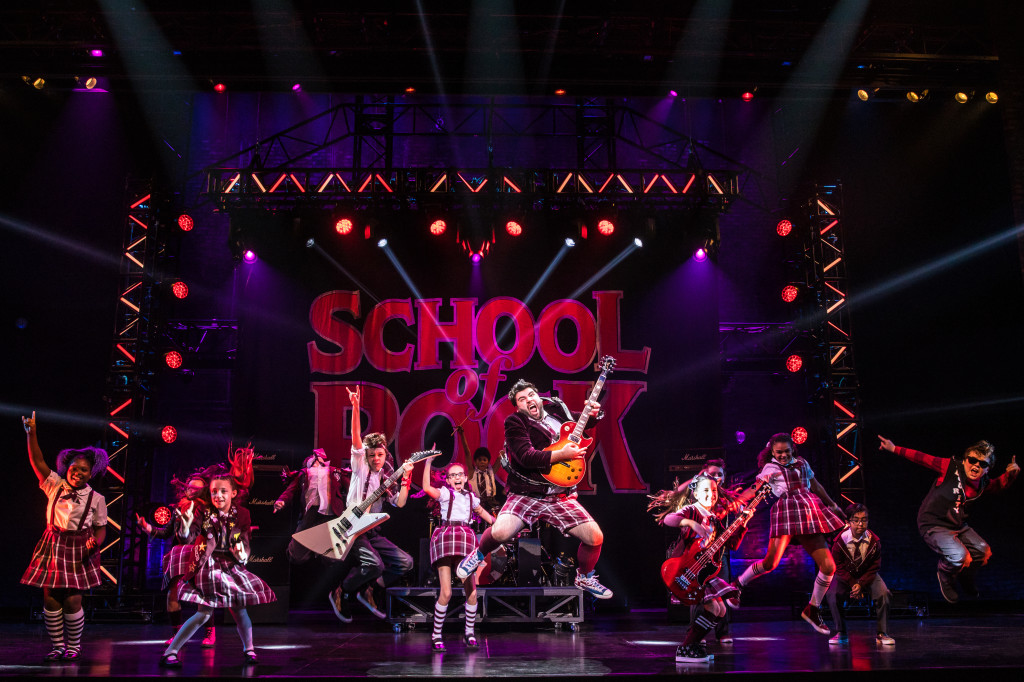 Most things are destined to be average, even musicals that have managed to stay on Broadway for a couple of years.

SCHOOL OF ROCK is amiable mediocrity. It spins a nice fantasy audiences will root to have happen and enjoy, it does so entertainingly, and it takes good advantage of a stage full of talented children.

The touring production, starring Reob Colletti as a rock guitarist masquerading as a substitute teacher at an exclusive Ivy-League prep school, stays on an even keel when it allows things to remain natural. When it pushes or forces comedy, as Colletti does in the first few scenes, the show looks like a confident package that takes its audience for granted. Luckily, such pandering is kept to a minimum.

SCHOOL OF ROCK never grows to be important or anything beyond diverting enough, but it has enough zest and liveliness to keep you going and to prevent you from hating it. In one way, this touring version provides a good lesson in comic performance. Colletti if frequently too broad and too obviously making more of an effort to be funny than accomplishing it.

Lexie Dorsett Sharp, who plays the prep school principal who walks and acts like she has an iron rod up her bum at work but can channel her Stevie Nicks when relaxed, shows how style and control works better than antics. Director Laurence Connor has Dorsett Sharp being just as mechanical and audience-baiting as Colletti, yet she pulls everything off in a way is admirable while Colletti is at his beat when his keeps his character direct and focused on a task rather than when he pulls out alleged stops to entertain.

Dorsett Sharp has many fine moments. The best may be when book writer Julian Fellowes, yes he of Downton Abbey, has her sing Mozart’s “Queen of the Night” aria as part of a music class. The self-satisfaction of Dorsett Sharp’s face tells you all you need to know about the vanity of the principal, whether she indulges in the vanity often or not.

SCHOOL OF ROCK has a standard movie comedy story from this era, and it’s pleasant and engaging enough. It also has a passel of energetic, entertaining children, and while you don’t worry much about them relinquishing academics for rock music or care about their stated problems with their demanding parents, but you do root for them to be great and compete well in the Battle of the Bands Colletti’s teacher is grooming them for.

Make no mistake, Colletti’s Dewey is a good musician, a good teacher, and one who is knowledgeable about music and its performance. How can one not enjoy watching a mite like Victor Molden wield a guitar close to his own size and wail out a riff that would do Clapton proud? Theoodora Silverman is truly impressive on the bass, and Theo Mitchell-Penner and Gilberto Moretti-Hamilton give you hope in the future of music as well.

Once the hackneyed but effective plot gets into gear, and wanting something for the children kicks in, SCHOOL OF ROCK is an easy watch that may not dazzle but keeps you involved. Andrew Lloyd Webber gets a lot of criticism, more of it trendy griping that real judgment. SCHOOL OF ROCK  proves that even second-rate Lloyd Webber is better than most of what we get today.

Glenn Slater’s lyrics are better than today’s norm as well. Fellowes goes between wit and the easy, almost contemptibly easy, joke. Cheers when he aces a moment. A potch in the tuchas for when he goes cheap (which, in this script, is more often). Connor’s production moves well enough, and the kids do great and create a lot of energy when they have the chance.

Oh, I almost forgot the excellent turn by Iara Nemirovsky as the brattiest prep who shows her sense of superiority is deserved. Read more reviews at Neals Paper >>>