Max Bialystock, a failed producer, wants to be the King of Broadway again. It used to be that any play he touched would turn to gold. He hires an accountant, Leo Bloom, who timidly suggests that more money can be made overselling  a flop than staging a big success. So Max sets aside his dream of being Broadway’s king and sets out to find, finance, and stage the worst play in the world. Bialystock & Bloom, mini-Madoffs of the theater world, fleece old ladies of their fortunes in order to produce a lavish loser of a play.

Mel Brooks’s THE PRODUCERS has gone from screen comedy to musical comedy to screen musical comedy and back to the stage again. The original movie (1967) starred ferocious comedian Zero Mostel as Bialystock and the inimitable Gene Wilder at Leo Bloom, a pairing made in Hollywood heaven. This production was the source material for the Broadway musical (2001), with endearing  Nathan Lane as Bialystock and a sweet nerdy Matthew Broderick as Bloom. Then the movie musical (2005) featured Lane and Broderick again. Fun, but it garnered mixed reviews, as some dubbed it canned theater.

On the Bristol Riverside Theatre (BRT) stage Danny Rutigliano’s Max Bialystock is all business— funny business. He easily handles this role. He was Herod in BRT’s spectacular Jesus Christ Superstar, and Sancho Panza in their Man of LaMancha. Michael Doherty as Leo Bloom is not neurotic and idiosyncratic to a Gene Wilder extent. But then who is? However, he is amusingly pathetic. New to BRT, although not to area stages, Doherty, like Rutigliano, has a fine singing voice. This Bialystock & Bloom team functions in a somewhat different way from the other screen and stage productions. The twoheadliners attack their roles with gusto, but don’t come off as show-stealers. It feels more integrated as they weave themselves into the bright comic tapestry. Everything is in context. All shine together. Things move briskly along. Although I have not always been keen on Baker’s direction of serious stage plays, it has become clear that if you want a director for a Musical, Keith Baker is your man.

Nicole Benoit’s  Ulla, the new secretary hired for their fraudulent venture, is an exuberant Swedish beauty queen.  Not shy about putting her assets out there, she performs When You Got It, Flaunt It.

Bialystock and Bloom find an awful play by crazy playwright Franz Liebkind (Fred Inkley in a strong performance). They choose the play for its offensiveness to Jewish habitués of Broadway, believing it wouldn’t last past opening night. Later on Max and Leo will lament, “Oh we knew we couldn’t lose/Half the audience were Jews.” This affecting and warm show also sends up gays:“I see German soldiers dancing through France/Played by chorus boys in very tight pants.” Roger De Bris, the worst director they can find, is the one who turns the show gay. Danny Vaccaro, as De Bris, is toweringly talland drop dead dazzling in his droll Chrysler Building crown and shining gown. He’s another actor with a wonderful voice. Morgan Reynolds as slinky and impish Carmen Ghia, outré De Bris’ common law assistant (and the show’s Dance Captain), plays directly to the audience. 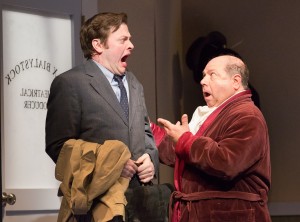 THE PRODUCERS mercilessly skewers Nazis, who could never tolerate ridicule, with lines like, “We’re marching to a faster pace/Look out, here comes the Master Race!” And they stick it to the Fuhrer as they frolic with his ‘favorite’ song and dance number, the ridiculous Der Guten Tag Hop-Clop.  And of course, there’s Springtime for Hitler, the show-stopper! The impeccable ensemble shines with Stephen Casey’s choreography. They’re not just set dressing, they can do everything – act, sing, tap dance, Nazi salute, whatever it takes. The work of scenic designer Charles Morgan, and the whole design team is completely over the top, which is just where it needs to be. The orchestra in the pit, led by Douglass G. Lutz does a grand job with Mel Brooks’s music.

Sitting toward the back of the theater I look over the cotton field of the audience. Oldsters are to be expected at a weekday matinee. Most appear to know the show. But this bright take on a deliberately old fashioned Musical Comedy isn’t just for old fans. It’s for everyone, even experimental theatre artists. And it’s a must-see for young aspiring musical stars and college theater majors, a disarming textbook that can teach the basics. Mel  Brooks’s traditional musical structure has a song plot that includes the time honored ‘I Want’ song, literally in this case, I Wanna be a Producer.  It has the ‘eleven o’clock number’, ballads, and classic production numbers. BRT has even added a reprise at the end of the first act. THE PRODUCERS is an outrageous Musical Comedy laced with friendship, warmth and love. And there’s nothing like chutzpah. BRT’s solid, no-holds-barred show has it.