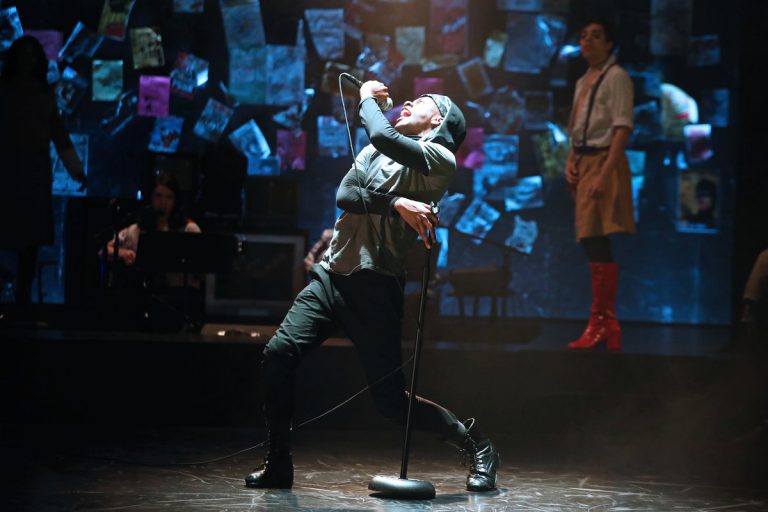 Youth is the time of our lives when the more adventurous among us follow French poet Arthur Rimbaud’s dictum that “everything we are taught is false.” That’s when we set out to discover for ourselves what is really “true” versus the “truth” inherited from our parents. It’s a theme of Passing Strange at the Wilma, a classic rite of passage story concerning youth and rebellion.

The 25-song rock musical that tells the story of a callow 22 year old artist who chooses rebellion over love. When you are 22 rebellion can be the sexiest thing in the world. In the Wilma production, Jamar Williams as The Youth thinks he has all the answers. He’s cocky and overconfident when he leaves his cozy middle class home for the marijuana-filled cafes of Amsterdam.

Passing Strange is really a wonderful production, but it desperately needs some cutting. The play’s opening songs, such as “The Baptist Fashion Show” and “Arlington Hill”, were far better than the repetitive songs about liberated Amsterdam.

Amsterdam is traditionally recognized as the city of total liberation where one can walk streets filled with brothels, straight on one side, gay on another, all of them teaming with human specimens presenting their fleshy best for the ready-to-spend body consumers in a world that might have been invented by poet Allen Ginsberg when he wrote, “This form of love needs sex.”

The Youth begins his European life with a vengeance. He calls home once in a while to see how mom is but he refuses her requests to come home for a visit. He tells her that he lives in Europe now and that he must devote his days and nights to his art. But what is that art exactly? Other than working on musical scores, his art is mostly soaking up the bohemian vibes of his new friends while he lounges in their edgy environments. His art is more about living the life of what he perceives an artist’s life to be (complete with the stereotypical accoutrements).

In Berlin The Youth aligns himself with an edgy arts group where Bohemianism becomes a kind of religious orthodoxy but he experiences a rude awakening when his radical cohorts take leave of him at Christmas because they want to be with their families. The Youth can’t understand this bourgeois sentiment and ends up spending Christmas alone, missing an opportunity to see his mom before her unexpected death.

When did becoming an “artist” come to mean adopting a mode of behavior that’s more alienating than life-giving? The Youth has yet to learn that to be an artist he doesn’t have to stop loving mom.

*That time before The Guardian’s notable headline of November 4, 2009: “The murder that shattered Holland’s liberal dream”, referring to the assassination of film director Theo van Gogh, a descendent of Vincent van Gogh, by a Islamist ideologue because of a documentary film van Gogh made about abused Muslim women.