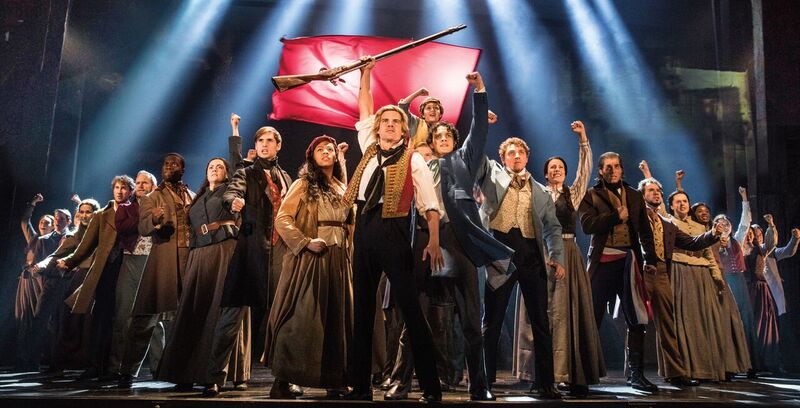 When I headed to the Academy of Music to see the Victor Hugo-inspired Les Miserables I had high hopes that I’d walk out onto Broad Street three hours later with a smile on my face despite the fact that age has taught me that the French Revolution was anything but good.

That “great” revolution, after all, caused 30 years of bloody warfare throughout Europe. And while it may be fun every summer to walk in stilts or impersonate a French baguette or even don drag to become a high wigged (and very blonde) Marie Antoinette and throw butterscotch Tastykakes to the thousands gathered around Eastern State Penitentiary, when all is said and done you’re still playing a child’s game far removed from life.

A “real” revolution, of course, would have all those July 14th revelers running and screaming for their lives. But time heals all historic wounds so that even the worst violence in history when played out on the contemporary stage becomes as pain free as a cruise to the Caribbean.

Do you want to see the heart of an aristocrat?” asked one assassin, opening up a corpse tearing out the heart, squeezing some blood into a glass, drinking part, and offering the rest to those who would drink with him. ‘Drink this, if you want to save your father’s life,’ commanded another, handing a pot of ‘aristocrats’ blood’ to the daughter of a former Governor of the Invalides. She put it to her lips so that her father could be spared. Women were said to have drawn up benches to watch the murders in comfort and to have cheered and clapped as at a cock fight.

While nobody drank blood from corpses on the Academy stage, there were two people sitting beside me holding little flasks of bourbon. Vivez la vie pleinement, as they say. When it came to gunshots and people dying, the show’s music anesthized the illeffects and eventually got me thinking that literally any tragic event in history when reconfigured as a musical, could become a kick ass stand up and applaud extravaganza.

Including, of course, a futuristic epic about Jim Jones and Jonestwon in which Peoples Temple devotees line up and dance like The Rockettes while awaiting their turn at the Kool Aid stand.  If nothing is above satire, as I think Swift once quipped, then what could pssoibly be ‘above’ a Broadway musical?

Hugo published Les Miserables in 1832 and the book was derided by critics. But what do critics know when it comes to commercial success? The 2012 Hollywood musical starring Ann Hathaway was satirized as Les Insufferables and Les Painful. Gawker also panned the film for its “phony happy ending,” while film critic Anthony Lane destroyed the movie, saying: “I screamed a scream as time went by.”

The Academy’s Cameron Mackintosh production had breathtaking stage sets that appeared to be matted 3 dimensional cinemascope veils in multiple colors. The battle scenes rivaled Yul Brynner riding in his chariot in The Ten Commandments. Fantastic visuals, yes, but as for understanding a word of the musical, that’s another story. The actor-singers might as well have been a Tower of Babel cacophony, human voices saying something, but what?

Les Miz, with its onstage cast of dozens (and dozens) was a cornucopia of song masquerading as dialogue. Sadly, this Les Miz was yet another case of a Broadway musical obfuscating language.

But then there was another irksome surprise. A ten year old soldier boy raises his middle finger during a ferocious, ugly battle in a defiant ‘screw you’ gesture and shouts something bombastic as his adult male compatriots fall over dead. To my astonishment, the audience howled at the boy’s manly verve although I could only see it as a contrived ‘Stephen Spielberg’ moment.

Happily, Les Miz was saved by the brilliant second act which had a smaller number of characters onstage. Finally—and thank God–every uttered word sung or otherwise, flooded the Academy with absolute clarity.