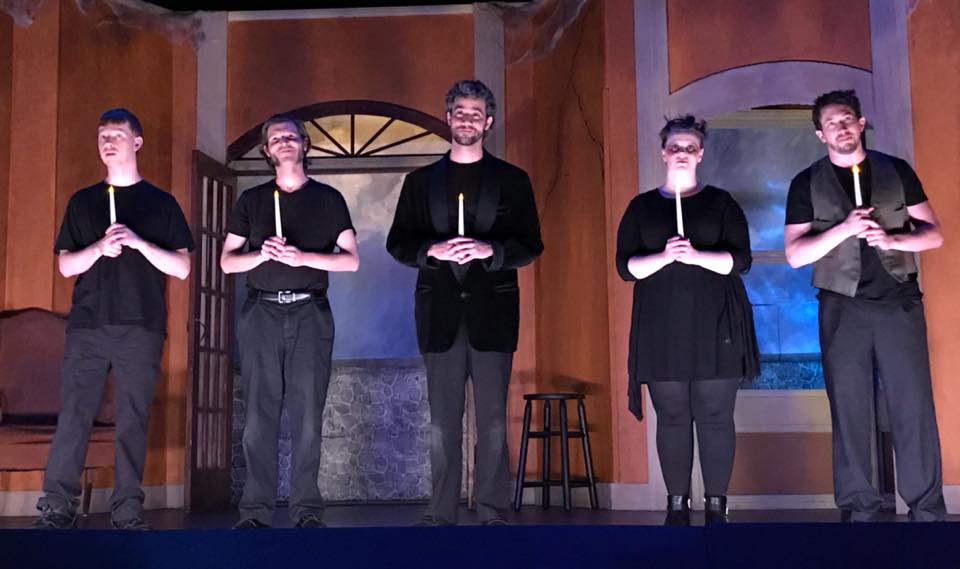 Tom Mula’s reimagining of the classic Dickens tale is a good fit for this family friendly company. The slightly anachronistic humor gets laughs, and a warm-hearted ending captures the essence of the Christmas tradition. The story is heavily narrated, with each character describing his actions and surroundings in flowery detail. This may be a literary homage to the original, but without strong support in the tech department, it requires the actors to do some heavy lifting, with varying degrees of success.

Brian Weiser stars as Jacob Marley, Scrooge’s newly dead partner. In the underworld, or overworld, his performance in life doesn’t measure up to his debts in heaven. He is punished with chains, which hang awkwardly in a doorway, then disappear. He is given a spirit guide, the Bogle, played by Teresa Nutter and a laser pointer.

This low-budget stage-magic is cute and effective but seriously lacking throughout the rest of the production. Weiser describes the visions of hell, but with no visuals. A light “blazes like the sun” in the narrative, but nothing changes onstage. “Night creatures” swim before him, but they’re just the other actors in black t–shirts, wiggling their arms. Throughout the play the characters warp through different times and realities. These transitions are occasionally indicated with a lighting change or poorly timed switch in the quiet soundscape. At times, not even these cues are given, and the scene changes are left up to our imagination.

Weiser does his best to create awe and wonder at the invisible sights with his strong voice and full stage presence. He’s at his best when he starts having fun terrifying Scrooge: distorting his face and using the full length of his limbs. Nutter is the comic relief, and her excellent timing and bubbly quips break up the long narrative, but she has a hard time with all of the miming required in the bare bones production. The tiny Bogle has to kick out at a long sheet of human-sized paper, but reads it as if it’s small and manageable. When they fly, they don’t seem to agree on whether they’ve landed. Jim Broyles’ Scrooge is appropriately cantankerous, but he is forced to break his own spell when he describes his easily attainable, non-existent props. (He peeks through his “sheets”. He puts on his “hat and gloves”, which he actually has in a earlier scene.)

Patrick Cathcart seems to need only a change in vest to become all the other characters. He alters his voice and gait seamlessly, although sometimes too ridiculously, asking for a laugh. His object work is the strongest of the bunch and each of his minor parts feels three dimensional. Browning Sterner is having fun with his part as the knowledgable standhand.

The story itself has some strange twists. Scrooge is responsible for Marley’s death. Marley is three out of four of the Christmas ghosts. There’s a bait and switch with Death, who is dressed in the ubiquitous cloak from Scream. In the end, all is forgiven, the Bogle gets its wings, and there’s a resounding “God bless us, everyone.” The feeling of Christmas is attained.