Synopsis: To balance the traumas of life—from a difficult childhood through a challenging adulthood—a man writes down every brilliant thing, every wish he can think of.

Confession 1: Hardly any drama has had as much of an impact on my life as EVERY BRILLIANT THING, directed by Arden Theatre’s seasoned Terry Nolen and performed by the amazing Scott Greer. This entertaining, but thought-provoking play by Duncan Macmillan with Jonny Donahoe made me think of how wishes during my own childhood helped me in at least trying to tackle tough situations in bombed-out Germany:

that my father would come back from the war in Russia (he didn’t); that one day I would win a soap box race and get a free ticket to America (I didn’t); and that I would pass English and graduate from high school (I didn’t). 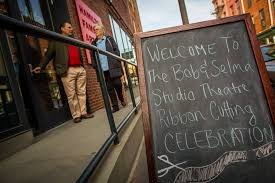 Arden’s Bob and Selma Horan Studio: At Arden’s Hamilton Family Arts Center on 2nd Street, just a few doors from the Arden Theatre, Nolen, founding, producing, and artistic director, greeted guests personally. He showed me one of the new black box studios upstairs before guiding me to the Bob and Selma Horan Studio Theatre. That night, it was filled with members of the Sylvan Society, some of the most ardent supporters of the Arden—plus members of the theater press.

A personal welcome: Scott Greer, one of Philadelphia’s most popular actors, spoke to each audience member before we were seated and gave us a card with a statement and a number, asking us to participate during the show. From the very beginning, an atmosphere of comradery permeated the studio where 80-90 people sat in four blocks facing each other. A beautiful carpet created a sense of a comfortable home. The lights stayed on for most of the performance. It felt as if we had been invited to a gathering in Scott’s living room.

Childhood trauma: Dressed in jeans and a plain, button-down shirt, Scott, as the narrator, shared his life’s story, starting with some of his earliest experiences and reflections as a seven-year-old. In some ways, his world appeared simple, as was the language he used. I was reminded of the opening of A Portrait of the Artist as a Young Man by James Joyce: “Once upon a time, and a good time it was, there was a moo-cow”—except that it wasn’t such a good time because the little boy’s mother had just attempted suicide and his father tried to explain to the boy what happened while driving to the hospital.

Collaboration with the audience: To make up for the pain, the boy started a list of wishes—“every brilliant thing.” The host asked an audience member to read card number 1—“ice cream,” followed in quick succession with other wishes that increasingly became more sophisticated—and so began the collaboration between the playwrights, the director, the actor, and the audience. This event brought us together as if we were all attending a memorable family reunion where we laughed a lot but where we also became silent and pensive during other moments.

Actor improvises and interacts with the audience: I received card number 3: “Staying up past your bedtime and being allowed to watch TV”—a statement that I was asked to read several times during the evening. John Timpane, the Philadelphia Inquirer reviewer, referenced my three seconds of fame (“One man has a U.K. accent”) and quoted Scott’s quick-witted ad lib response to my voice, “This guy watches Masterpiece Theatre, I bet.” Not bad, I thought, given that English isn’t my mother tongue.

Universal and yet personal experience: Having experienced this coming-of-age drama in the form of an interactive journey with the audience—one hour of collaborative theater without an intermission—I felt renewed and elated. Apparently, so did the neighbors to my left and to my right: total strangers who spoke with me as if we were cousins that had not seen each other in decades. I cannot recall a similar experience in the theater that was as universal and yet personal as this British play, which sounded as if it had been Scott’s own story. Several audience members asked me that question during the reception afterwards, while throngs of people surrounded both Nolen and Greer, shaking hands with them and thanking them for a most remarkable evening.

Confession 2: I consider a play excellent if it makes me think, if it moves me to the core of my existence in such a way that I feel compelled to tell everyone I meet about it. On my way home from the opening night performance of EVERY BRILLIANT THING, I spoke with a stranger on the train about the play. And, as soon as I arrived at my house, I talked to some friends on the phone and left some Facebook messages.

Confession 3: Some people are color blind. Apparently, I am numbers blind. Convinced that the sold-out production was extended to December 17, I wanted to write my review of this most unusual play this week, only to discover that the last performance just took place at 7 pm tonight.

In New York, scalpers sell tickets to overbooked productions like Hamilton for many hundreds of dollars over the ticket price. EVERY BRILLIANT THING at the Arden most likely would fetch similar prices tonight.

Update: The show caused such a buzz in Philadelphia that the Arden Theatre is talking with several other regional theaters about taking their sold-out production to other cities and are looking into bringing it back to the Arden next season.

I couldn’t think of a better gift for this season: EVERY BRILLIANT THING coming back to Philadelphia and perhaps working its Ardenian-Greerian magic in other theaters as well. Happy holidays, one ‘n all.