Four hundred musicians gathered at the 23rd Street Armory on Sunday night to perform on a wide array of broken instruments from the Philadelphia School District. Any mammoth production such as this is bound to be at the very least interesting, but this new piece by David Lang was also complex, beautiful, and profoundly moving.

The instruments were selected from over 1,000 broken ones the school district cannot afford to repair. They range from mostly fine to totally unplayable (Trombones can take a beating, cello necks cannot.) The performers are on an equally wide spectrum of background and experience. They include school children, Philadelphia Orchestra members, and everyone in between.

The orchestra surrounds the audience in ten sections, with conductor Jayce Ogren in the center of the vast space. The piece starts with the rattles and clicks of the instruments, smiling at their brokenness. As more sections join in the clacking, the sound rises and falls in waves from every direction. Tentative tones reach through the clatter, like an instrumental beginner testing her sound. The strings take the first part. Higher ones hold the initial tone, lower ones lightly pluck a bass line that propels the entire first movement. As woodwinds join, they form a major triad, the various tunings and timbres forming a thick, malleable texture. Eventually, the brass produce a minor chord: fried, blackened and overblown. The piece plays like an introduction to music education, complete with a chaotic quote of “Hot Crossed Buns”.

The second movement makes use of section leaders, each giving rhythm and direction to their group. The personality of the instruments are on display here: the staid and steady tuba, the pushy trumpet, the showy violin. The chaos is taken over by an ostinato pattern, leaving a space for a powerful trombone solo. A simple minor line emerges, becoming a primal chant spoken by all, wordless and reverent. 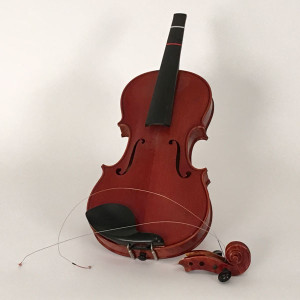 With so many performers from so many backgrounds, it is entertaining just to watch how they associate with the piece. The performers on the most broken instruments continue percussing with varied levels of enthusiasm. An adult dances her fingers along the body of her cello while a teenager with a broken autoharp nearly falls asleep. An older, avant-garde jazz musician is grooving hard, as is an energetic music teacher. Turning around to watch the conductor reveals a course for the cacophony, as he signals to the sections like the hands of a confused clock.

With the help of donors who’ve “adopted” the instruments, Temple Contemporary will have them repaired in hopes of repairing music education in our schools. A student lucky enough to have that education explained her feelings of the process after the show. In sectional rehearsals they were separate and broken. When they all finally played together, they were made whole.