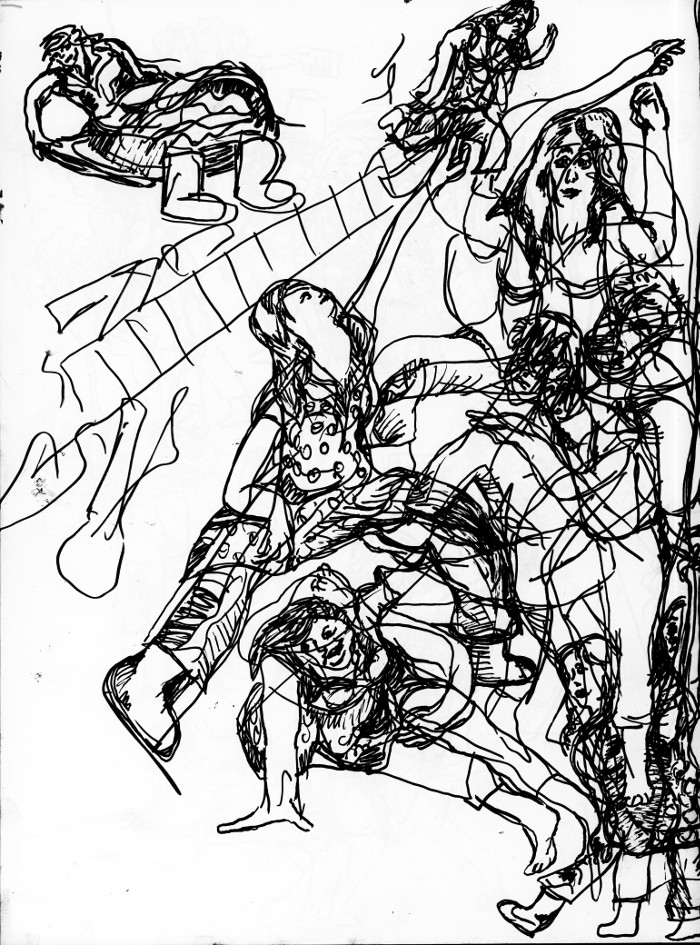 The three artists in Subcircle transform the FringeArts stage in a never-ending improvisation. The sound, color, and music are interpreted into decisive duets and interdependent movements. The surrealism of their collaboration is this idea that we are dancing and co-existing with these things around us that effect how we move. The preparation for HOLD STILL WHILE I FIGURE THIS OUT is a kind of interdisciplinary act, play, or dance. It caters to the sensitivity of a person able to thoroughly absorb the flow of things. 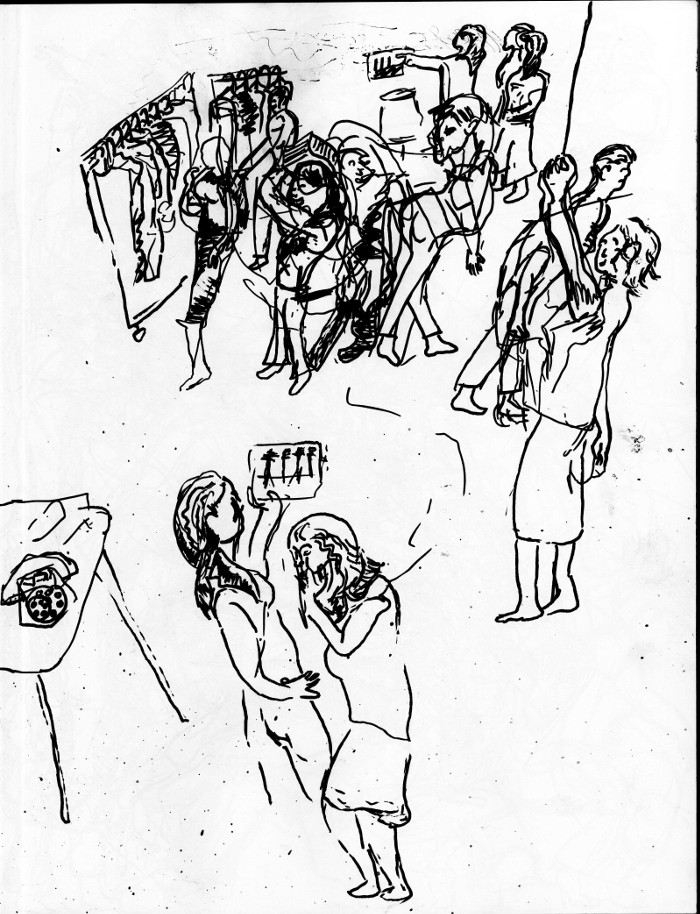 The stage was full of things that would be found backstage in the storage of props. The photograph of telephone poles in a clearing of land is picked out by one of the dancers. This started to turn the creative wheels for the two dancers. Niki Cousineau danced with her fingers tapping at the floor, and she moved this invisible box in her hands. The next particular movement seems to be a vehicle in the shape of her hand and it was flying beside her head. The sound of the dancers looking at the telephone poles was playing as a recording, and one of their comments was, “…if only we were 6ft. taller.” There were hangers holding wardrobes for any costume change, and they changed into clothes that fit to their own subjectivity . All of these things are influencing how they improvise to new surroundings. In my opinion, pull strings around the stage changed the space, changed the music, and brought down an unexpected present. 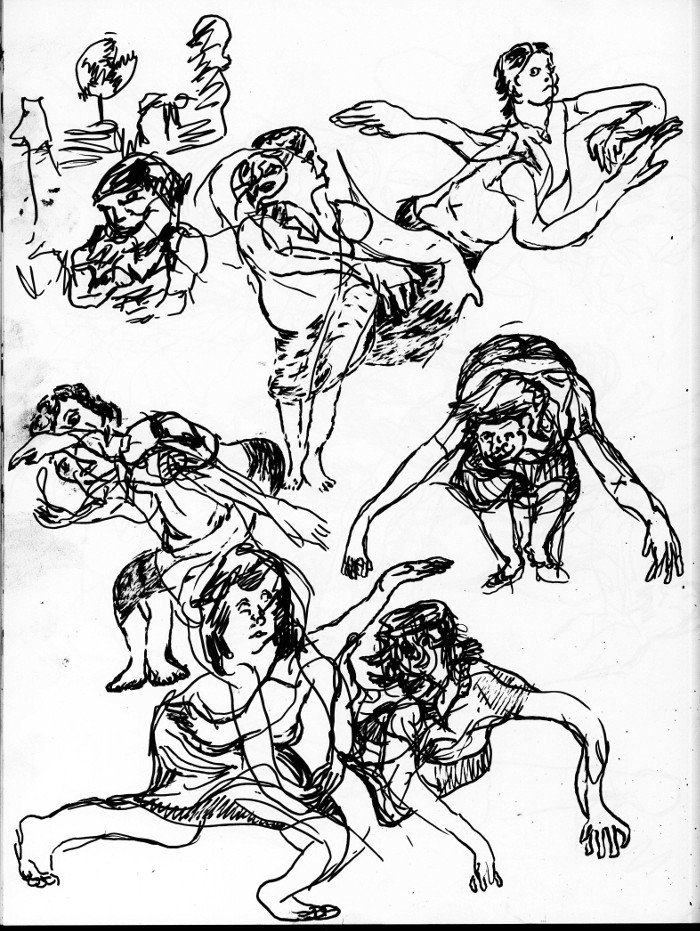 We are given a diagram of the structure of the performance, “a flow chart.” The space is set with a ladder and blanket laid out on the floor. The two dancers, Kristy Lee and Scott McPheeters, sit facing each other Niki begins to read something she wrote down after her finger tap dance. One of the reactions that was from Scott McPheeter was to Kristy Lee in the corner of the room. “it is like she is having a party by herself, and I don’t know if she is having any fun… she is not having any fun!” The purple tissue paper that Niki used to mimic the feedback presented by Jorge Cousineau’s audio was reupurposed as confetti to imagine a party happening at the back of the room. They are following this flowchart and the direction of the dancers’ brush by each other leaving an impression for the next movement. 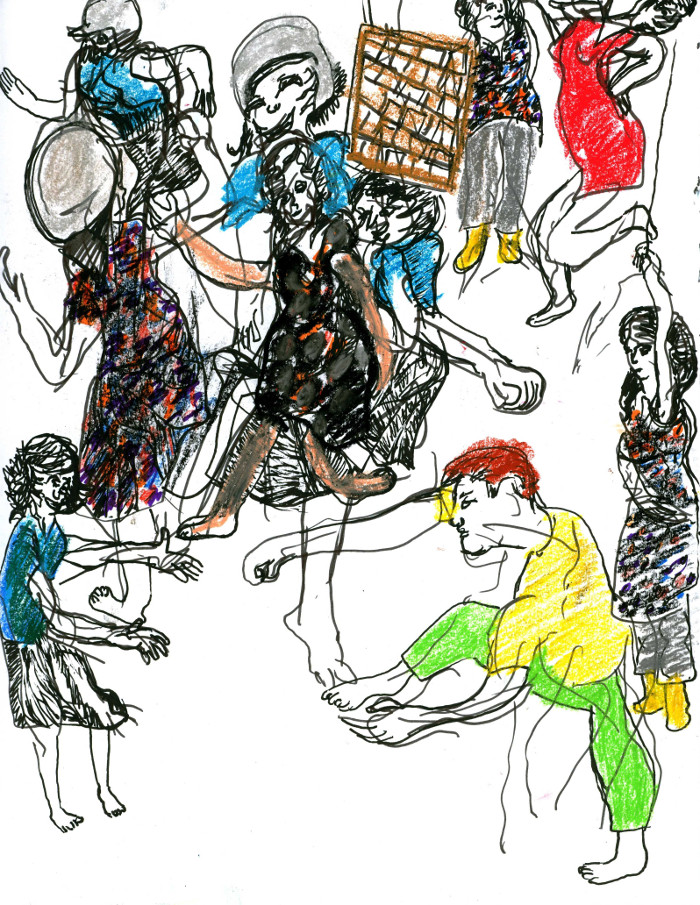 In my opinion, the motorcycle helmets were part of the segment, “for each other”, which is indicated on the flowchart. This present was short lived and fell from Niki’s head. It shattered on the ground, but Kristy Lee learned something and used her chin strap to properly secure the thing to her head. The improvisation added input to a linear narrative that added meaningful acts of engagements, rearrangements, and show how simple reactions to our new surroundings can create a nostalgia.