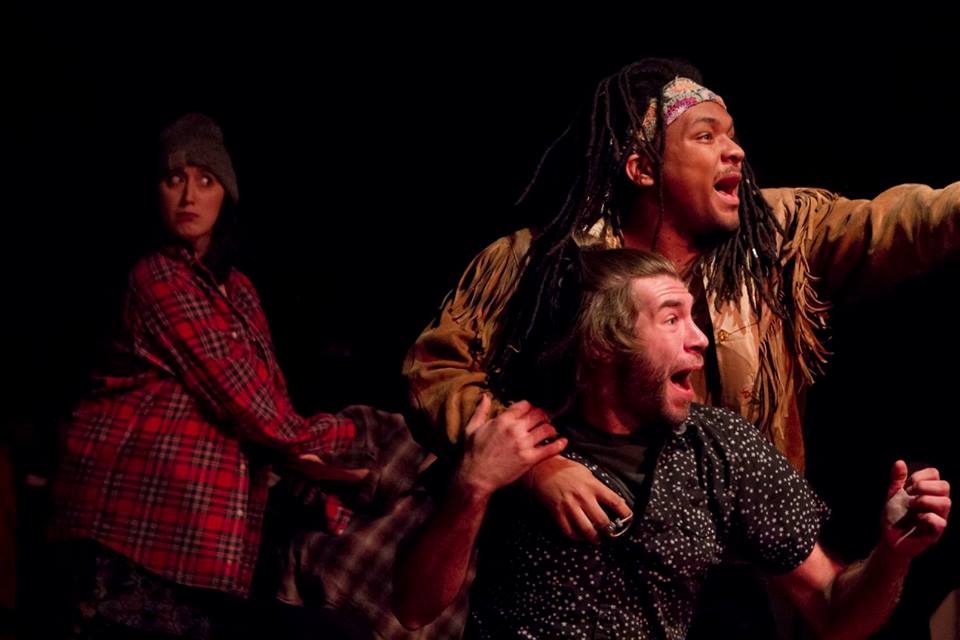 This musical theater version of Shakespeare’s Two Gentlemen of Verona, launches EgoPo’s season as a cabaret/fundraiser; John Guare wrote the lyrics and the adaptation with Mel Shapiro, and Galt MacDermot wrote the music. With the audience seated at round tables, drinking wine, and the young, talented cast of ten standing behind music stands, wearing what look to be their own clothes, the effect is high-spirited and delightfully messy fun. Brenna Geffers directs.

The plot is Shakespeare’s usual for comedic love stories: gender bending, women in disguise as men, identity ambiguity, romance gone awry, unreasonable fathers, heartbroken and/or rebellious daughters, rich suitors, happy endings. Here with Guare’s compression of the plot and various elisions and omissions, the plot is even more confusing than usual, but it doesn’t much matter.

The two gents—Valentine (Aubrey McKinney) and Proteus (Philip Wilson)—are anything but gentlemanly in their treatment of women, and the contemporary overtones are vivid, as Silvia (the adorable Camille Young) gets handed from suitor to suitor, until she finally sings, “Release me from your fantasy,” with a girl backup group singing, “Let her go.”

Meanwhile betrayed and scornful Julia (the excellent Sol Madariaga)  declares, “frankly I don’t really care for people” until she, too, is first smitten and then two-timed (or, actually, three-timed, but no need to overcomplicate this summary).

Silvia’s father, the Duke of Milan (the fine-voiced Michael Lienhard) promises prosperity to his subjects by sending the boys to war, and then, if they re-elect him, he promises to “bring the boys home.” Guare wrote this Two Gentlemen in 1971, and you can hear the anti-war sentiments of the Vietnam era. And with all the exuberant sex and boisterous hairdos, the show echoes, both musically and thematically, the show that defined the Sixties, Hair.

The rest of the cast is charming (Katherine Perry, Emily Fernandez, Francesca Nong, Anthony Crosby and Joe Wozniak), and they can all handle the variety of musical styles the score throws at them. Good fun all around.