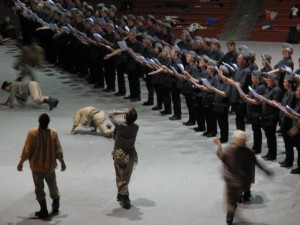 Leah Stein has had a very prolific year performing and choreographing with several projects overlapping, including the first revival of her epic scale ballet Battle Hymns on the West Coast.  Her company has also been awarded a grant from PEW center for Arts and Heritage for a yearlong studio research project for seven dancers and seven singers.

This month, the company is preparing Stein’s Adjacent Spaces, her 2013 Fringe Festival piece opening the second week of the festival, in rooms at The Shiloh Baptist Church on 21st and Christian St. in South Philly. “It does seem like I’m choreographing a lot; but not really, it’s just right timing, “speaking about her recent work while she was on a short mid-August vacation in Ocean City, NJ.

Known for her site-specific installation, Stein makes clear distinctions, about a dance piece being organically in a space as opposed to the site being a backdrop in performance.  Battle Hymns was a prime example of that. It premiered in 2009 at the 24th St. Armory in Philadelphia. The libretto is an antiwar statement based on letters written during wars and visually alludes to conflicts from the Civil War to Vietnam and even Tiananmen Square. The choreography expresses bodies under stress, fight or flight instincts and the resolve for order and humanity. The symbolism just resonated in every corner of the cavernous space. .

Along with Stein’s potent, driving choreography, it was scored, with sonic oratorical scope by Pulitzer Prize winning composer David Lang. The 85-member Mendelssohn Club chorale performed.  Stein had the singers in costume and in motion with the dancers at various points.

As ambitious as it was in Philly, for the revival in San Francisco, Stein said, “It was actually scaled up, the Kezer Pavilion was bigger actually and there were two choruses- Volti and San Francisco Choral Society- and the Piedmont Children’s Choir.

Stein said it was “a challenge to re-stage a piece this size in a new location with new singers and bringing our dancers as well, bringing all the parts together from a distance.

Stein only had three sessions with the singers before the LSDC dancers joined them in the Pavilion for just one week before the performances.

“We all got in the space and jumped into staging it. The performances actually were just as powerful to me as the premiere, especially with the addition of the children’s choir with David’s music. There’s something about Battle Hymns, all the elements seem to come together, I really feel like it’s a seminal piece,” she said. On both coasts, it attracted huge support in both classical choral music and dance audiences.

The Shiloh Baptist Church has become a performance hub and a destination on the Hidden City tour map in recent years. It has been much in demand for dance projects, to the point that the managers cannot accommodate all of the requests. Stein immediately connected to the rooms when she attended a performance of Niki and Jorge Cousineau’s troupe Subcircle performance there.

“I feel like this piece is completely architecturally inspired, even more than its historical significance, “Stein observes, “Adjacent Spaces” that title can mean different things. But the juxtaposition of light and dark in these rooms, the contrasts in this rambling architecture statement, the structure kept expanding, with more than one vision. It has a unique feeling about it.”

In the Church,  Stein is working with composer-violinist Diane Monroe. They have been “listening” to the space. “How the natural acoustics are for different entry points, for musical idea and what that gives both of us for possibilities of improvisation,” Stein explained.

Monroe is accomplished both as a classical and jazz musician, but cannot be confided to many categories as an improvisational master. Stein is very much about experimentation and pushing her own boundaries as she puts it “even further out.”

“The one room upstairs that we‘re using, it’s called the Boy Scout room, is all wood, has very high ceilings for a second floor and it’s an irregular shape and it has opposite side windows that just glow. Other than that brightness streaming in, it’s very dark, and the contrast gives it a special quality,” she said.

In her 2012 Fringe piece, “Hoist” Stein had dancers mounting and vaulting the walls of an old trolley car repair station.  “This is so different, “Hoist” was extremely athletic, we used metal structure that hinged off the brick walls and we were all over those rafters,” She recalled. “This is a contrast; the tone of “Adjacent Spaces” is much quieter. There’s one darker room in particular needs to be used as a serene interior.”