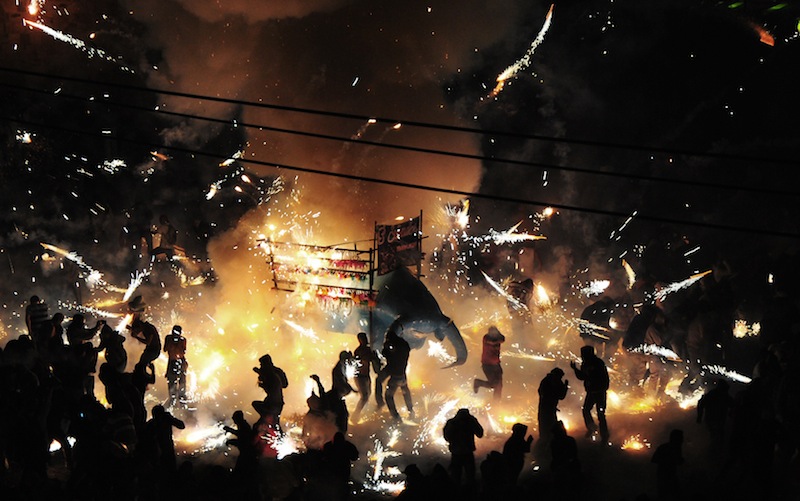 During Curator’s Night, in which the brains behind the Philadelphia Film Society outlined highlights of the fest, the one film that every talking head couldn’t help but gush over was Brimstone & Glory. Prior to the screening, artistic director Michael Lerman referred to it as ‘pure cinema.’ A more accurate description could not be written.

Set in the streets of Tultepec, Mexico, the self-proclaimed fireworks capital of the world, this visually arresting documentary avoids using a classic narrative structure to tell its tale. Short of a few moments where we check in with individual players, the film focuses on the National Pyrotechnics Festival at large, mostly through stunning abstractive footage of the explosives in action, all set to an immersive score by Dan Romer and Benh Zeitlin (Beasts of the Southern Wild).

The majesty of the fireworks displays are not framed sans acknowledgment of the danger. A striking image, that of a one-handed man packing gunpowder into a shell says just about everything. GoPro footage from the point of view of a fireworks stager, in which the worker’s lit cigarette dominates the frame says the rest. Any questions as to why these people subject themselves to such dangers in the name of tradition are answered in kind — because it’s tradition. And what is tradition but the illogical adoption of behavior?

Funny that the National Pyrotechnics Festival seeks to honor the patron saint of fireworks makers, who, according to legend, emerged unburned from the fires of celebration. Films like this are why I go to festivals. There is truly nothing else quite like it.