Wonderstruck has all the sheen of a good movie: an Oscar-caliber director, an acclaimed novel as its source, impressive cinematography, Julianne Moore. No, it’s not an altogether bad movie, but its sheen has the capacity to fool you into thinking it’s more worthwhile than it is. A line from its climax is indicative of the whole viewing experience, and would have functioned well as a title card: “I need you to be patient with this story.” It sounds too meta to be real, but it’s true. Profound patience is a requirement for sitting through Wonderstruck.

The film follows two 12-year-olds during two different time periods, as they search for love or meaning or – actually, it’s not at all clear exactly what they’re searching for. There’s either too vague an idea or too simple a reason to warrant the journeys that these two kids are on. Whatever the case, Wonderstruck tracks Rose in 1927 and Ben in 1977 as they wander through New York City on their respective journeys. Both kids are deaf, a device that allows for sound design to shine, particularly in Rose’s story, which is structured and shot like a silent movie. While the production design in both time periods is convincing, it’s hard not to think that Wonderstruck relies on the gimmickry of the concept to tell its story.

Even considering my cynicism for its very reason for existing, a movie about children experiencing new worlds and ideas should be endearing. But anything endearing about it is wiped clean by its baffling pacing. It’s clear early on that Wonderstruck is working hard to build to something; it introduces ideas it has every intention on following through, or returns to the same images so frequently that they have to amount to something. But Wonderstruck’s diligence in dropping breadcrumbs becomes a hundred-pound weight dragging behind the plot, preventing the film from sweeping you away into a world of curiosity and awe, despite the film being ostensibly about precisely that. It’s also trying so very hard for a half-baked theme of “where do I belong” to find its footing, but it peeks out from the plot’s drudgery too infrequently to be viable. 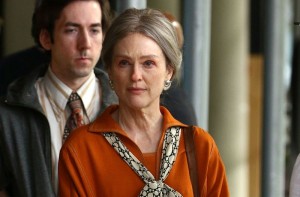 In turn, the movie becomes far too frustrating for any charm to shine through. It’s almost as though Wonderstruck knows that by the time it (finally) gets to the “big reveal,” the reveal has already been figured out, so it spends the ensuing fifteen minutes drawing it out as far as it could possibly go in an effort to justify its existence. And yes, the reveal can be seen from an hour and a half away. The sensation of wanting to grab a movie by the shoulders, shaking it, and screaming, “Get on with it already!” has never been so strong as with Wonderstruck.

Ultimately, it’s impossible to know who Wonderstruck was made for. Considering there is very little adult involvement, you’d think it’d be the kind of movie made for kids that also happens to speak to their parents. But the nature of the film seems too grown-up to reach children that are even the age of the protagonists. There are too many details to recall, too much emphasis on architecture and geography to possibly hold a kid’s focus. But it also can’t be made for adults, because there’s no attempt to generate nostalgia. It’s not required for nostalgia to be of a specific time period, but a viewer over a certain age needs to see their own childhood within the experience of a movie about childhood in order to emotionally connect to this kind of story. Worst of all, we spend so much time and energy keeping track of an endlessly tiresome story that Wonderstruck fails to do what its title suggests. It strikes no wonder at all.