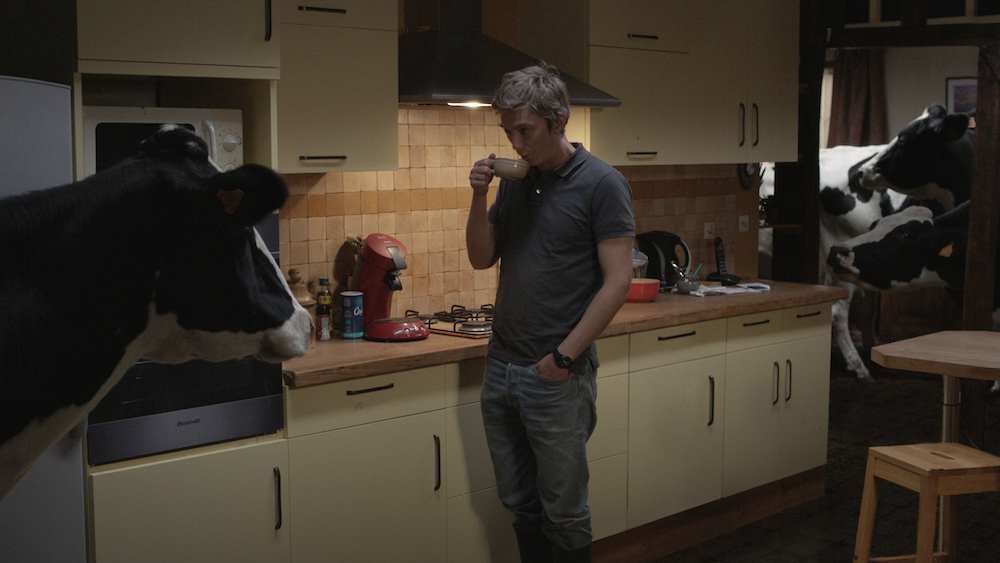 Bloody Milk is a sort of genre-less affair which could best be described as “occupational drama
dressed up like a thriller.” Meaning that this small potboiler toys with genre conventions but cleverly
refuses to lean into them. This results in an atypical, but accessible story which takes place in a
generally unseen world: that of a dairy farmer.

The dairy farmers of France are in a panic due to a highly contagious infection which causes cattle to
take ill and die at an alarming rate. The government, in the interest of preventing an epidemic, has taken
a hard line against any new infections. If one cow is sick, all are put down, and meager compensation
payments are issued to the farmers. Unfortunately, bureaucratic red tape is preventing timely payouts
and more than a few farmers have lost their livelihoods as a result. When one of Pierre’s prize cows
succumbs to the mysterious bug, he decides to take his chances with the authorities by destroying the
fallen animal’s corpse and hoping against all hope that the sickness hasn’t spread. Bodies (animal) pile
up as loyalties are tested amongst the dairy farmer community.

Bloody Milk keeps everything understated so that the performers needn’t stretch into a heightened
reality. Swann Arlaud’s empathetic portrayal of Pierre cleanly sells the idea that his desperate acts are
not just employed to protect his business, but also out of a genuine love for his livestock. Sure, what he’s
doing is illegal, but is it really so wrong?

The most difficult aspect of the film is its use of real cattle, both alive and dead, in depicting dairy
farming in a clinical, frank manner. It’s this same genuineness which makes Bloody Milk such a unique
experience. Any judgments cast against characters or their occupational duties are strictly in the minds
of the viewers.