Between the paperwork, the deadlines and the fees, producing a show for the Fringe can intimidate even the most seasoned professionals.  But the 18-day festival also offers up-and-coming choreographers a great platform from which to introduce themselves to the city of Philadelphia. This year, freshly minted graduates from the Class of 2013 at both UArts and Temple will be throwing their hats into the ring with Roots and Enormous PoCkEtZ. 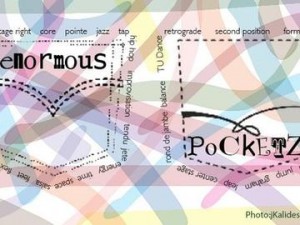 AKA Performance, which takes its name from choreographers and co-founders Ann-Marie Gover, Katrina Atkin, and Alessandra Delle Grotti, will present Roots, an exploration of perception, gender, and time at Philly PARD from September 19th-21st.

When asked why they chose to start their own company, the UArts graduates cited a desire to build on the momentum they developed as students.  According to Delle Grotti, “we wanted to provide work opportunities for ourselves in the dance field. Auditioning can be hit or miss so we decided to make it happen for ourselves as well as going to auditions and searching for jobs” Gover added, “we wanted to stick together. We wanted to continue dancing and making dances with each other. Philly provides us space to be able to do that.”

Emma MacDonald, spokesperson for Temple grads Gracie Coscia, Sarena Kabakoff, Alison Liney, Kiara López, Julee Mahon and Dominique Vasquez who will present Enormous PoCkEtZ at the Performance Garage on Saturday, September 7th, stated, “we really wanted to present ourselves as individual artists. We have become a support group for one another over the past few years, so it only made sense that we ought to help each other step foot into the working world. It has always been an important part of us to show our individual creative worth.”

MacDonald also commented on the seven dancers’ shared backgrounds. “We are similar in our training; we are all cut from the same cloth, and I think that is really important. Our training at Temple molded us to become artists with integrity and to be deep thinkers, but we each have interpreted that artistry in our own way. Even though each piece will be slightly over five minutes long, in those short minutes the audience will be able to see those wonderful artistic differences, and yet see the similar through line that flows through all of us.”

“These pieces are short for a reason,” she elaborated, “they are not full works quite yet. They rather are meant to spark interest and take a first step as choreographers and performers in the Philadelphia dance community. That is not to say none of us have performed in the community before, but rather it is revealing our work without the safety net of course work, teachers or a preset structure to do so.”  Enormous PoCkEtZ will run approximately one hour.

Roots will be just under an hour and a half and will feature a “reverse” set up with the audience on the stage and the dancers on the floor.  Atkin’s piece, “Time is fleeting – Time is eternal” addresses the concept of time. “I think that the fact that we can never feel time the way we think we should and the fact that we don’t know what we have until its gone were driving concepts that inspired the relationships within the work.”

Tackling an equally difficult theme, Delle Grotti explained, “For my piece I am interested in the concept of love and intimacy and the many perceptions of them from myself and those around me. For the past year I have been dedicated to John Armstrong’s book Conditions of Love; The Philosophy of Intimacy and have been highly influenced by his knowledge. I am using experiences and viewpoints to investigate these grand concepts that are consistently being questioned and using them to discover new philosophies of what love and intimacy really are […] I am starting to think this will be a work I will never truly understand.”

Music for Enormous PoCkEtZ  runs the gamut from Billy Joel to Afro-Cuban drumming, both live and recorded.  Roots will feature a range from Beyonce to Beethoven.

For MacDonald, one of the biggest challenges of producing a show for the Fringe has been including so many different artists.  “We really wanted this to be a group effort, so we all had to make sure everyone was on board before making any big decisions. The most difficult decision was to find a venue. We searched for weeks before settling on the Performance Garage, and that was the day before registration.”

For the dancers of AKA Performance, logistics were also challenging.  “Collectively, financing a show with our limited budget has been difficult,” Atkin explained.  “We are also in a time of huge transition being out of the structure of school for the first time. I am finding it really hard because I want to give the show every bit if my energy, but I don’t have the ability to do that the way I would have in school.”

Both groups of dancers have high hopes for their performances, however.  AKA Performance is looking for awareness, creation, support and community.  MacDonald and crew are envisioning their show as their premiere as independent artists.  “We didn’t have any structure to abide by, no seasoned choreographer or producer to instruct us, we just had ourselves and our will to make this happen. We hope that we see many new faces or faces that we have missed over the summer because we want to make connections with new, up and coming artists and reconnect with artists we respect so deeply. This performance is meant to make room for those connections to take place, and also allow ourselves to discover how much we can accomplish on our own.”