I, Tonya wants to be about love. About the love gotten from parents, from spouses, from oneself, from the world. “She loves skating. She won’t shut up about it,” says Allison Janney’s LaVona Golden on the ice of a skating rink, one hand holding her three-year-old daughter’s, and in the other a cigarette. (When she’s told she can’t smoke in the rink, she’s quick to push back, “I’ll smoke it quietly, then.”) In a scene shortly thereafter, LaVona refuses to let her daughter use the bathroom because skating practice is too expensive to waste that kind of time, and soon tells her to “skate wet” after she urinates on herself.

Skating should have been the foundation upon which the conflict of this movie was built. But despite being ostensibly about its titular character and her Olympic career, her mother’s remarks at how much she loves the sport is the last we get a sense of what it means to Tonya Harding (Margot Robbie), at least until the very end. In an ESPN 30 for 30 special done on her life (from which I, Tonya uses real quotes), Harding describes how skating was her outlet, a way to leave behind her troubled home life and foster her talent as the only thing she felt that she could call her own. I, Tonya makes skating merely a job for her, something we see her doing about as frequently as we see her getting beaten by her husband, Jeff Gillooly (Sebastian Stan), and exactly never as a mode of catharsis.

We understand that the perceived “love” Harding gets from those who cheered for her when she landed her triple axel is filling a void in her life, but we’re never given an opportunity to feel it, perhaps because the film squanders most of the sympathy we may find for her. Of course she works for her gift, but she also displays graceless entitlement when she knows she skated better than her competitors but didn’t get the scores she felt she deserved. She says, “It wasn’t my fault,” so many times it’s impossible to keep track of how often Harding shifts blame from herself. But what could have been made to come off as endearing (a gusty woman bucking the “ice princess” tradition of the sport) I, Tonya shows her as too petulant and hotheaded to feel much pity for, even as skating judges are actively discriminating against her for her frizzy hair or choice of ZZ Top for music. 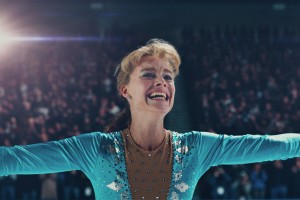 This lack of sympathy could also be a contribution of the sorta-present-day interviews of Harding, Gillooly, and Golden, which are used as frame narration intercut with flashbacks of the real events. The interviews tend to be comedic relief, but the problem is that the interviewees are not in on the joke. Since the interviews clash tonally with the often violent and dismal reality of the flashbacks, they start to feel cheap, like they’re exploiting the characters’ white trashiness for the sake of a laugh amid real conflict. The comedy undercuts what the film is trying to accomplish dramatically, so much so that the characters end up inadvertently making fun of themselves, and the film becomes irreverent to its own story.

Most confounding is when I, Tonya abandons telling Harding’s story and focuses on the minutia of “the incident.” And since Harding had little part to play in the incident’s planning and execution, she’s almost entirely absent for twenty minutes or so. Gillooly ends up having about as much screen time in this movie as Harding does. (Considering his part is so beefy, it could have been called I, Jeff and still worked.) But it’s too frustrating and tedious to matter, not just because of the time taken to detract from Harding’s story, but because the film doesn’t bother considering whether or not Gillooly needs a voice. The film’s preoccupation with the incident broke any dramatic tension it may have built, and lost the thread of what makes Harding’s story one that’s worth telling.

The argument that her story is worth telling because of the incident is invalid, because I, Tonya takes pains to remind us that the media coverage and public obsession with the incident ruined her life. “I was loved for a minute. And then I was hated. And then I was a punchline. You were my abusers,” Harding says to the camera in a section of interview, implicating everyone sitting in the theater as much as she’d implicate her mother or Gillooly. But I, Tonya can’t possibly make that argument credible, because it spends too much time on the incident to justify its position that fame is what destroyed Harding’s life. And by even attempting to argue it, the film implicates itself as much as anyone else.

And then there’s this moment towards the end of the film: Gillooly watches as the last news van drive off from in front of his house, while in the corner of the room a small TV plays a news clip of O.J. Simpson before his own infamous trial. It’s a comment so empty, a moment so obvious and contradictory to what the film had already said, that it confirms it never actually knew what it was trying to say in the first place.

For all its failings, I, Tonya isn’t without its merits. The scenes of Harding skating are filmed beautifully, and while it’s probably true that Robbie’s face is superimposed onto a figure skater’s body, the CGI is convincing enough to not be distracting. Robbie impressively plays all aspects of Harding’s psyche, particularly in a silent scene before her final Olympics performance, in which she puts on makeup alone in a mirror, crying and smiling wildly at the same time.

But it’s Janney’s performance as Harding’s abusive mother that makes this film worth watching. For as much as she berates and beats her daughter, or complains about skating using up all familial financial resources, she finds a perverse pride in seeing her daughter succeed. The most impactful moment of I, Tonya is when Golden is watching Harding skate on a TV in the restaurant where she works. Her boss is yelling at her to get back to work, but Golden fires back, “I just want to see her face at the end.” When she sees it, her daughter’s face beaming with accomplishment, the camera closes in on Golden’s, and you’re actively searching for any twitch or change in musculature, any sign of love. Whether or not it’s there is up for interpretation.

The success of I, Tonya hinges on our understanding of the kind of people the three main characters are, either the tabloid caricatures or something more substantial, but the film tries to do too many things to let us decide for ourselves. It’s not a nuanced approach more than it’s indecisive, and it ends up muddying the waters of morality. You really want to feel for Harding, to empathize with the poor little girl with a history of abuse, who overcame so much and succeeded far beyond anyone’s expectations. The film wants her to be the underdog, but it spends too much time telling us she already is one to let her become one. I, Tonya’s ultimate failing is that it becomes the thing it’s trying to make a comment on: something so obsessed with the salacious details of her story, that it forgets all about Tonya as a person.