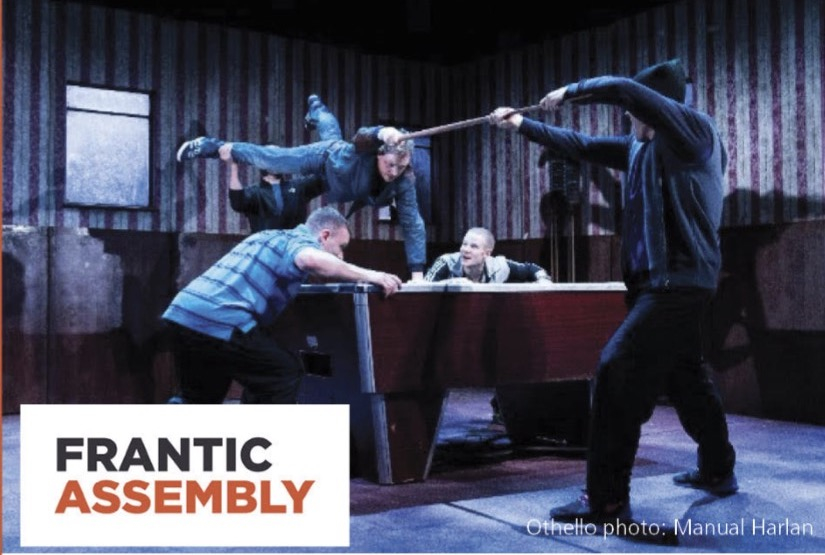 Frantic Assembly’s award-winning work was seen recently in Philadelphia in the national tour of The Curious Incident of the Dog in the Night-Time, for which the company won a Tony for Movement Direction. The methodology the company has developed claims to “create heightened movement that is grounded in reality”. Led by co-founder Scott Graham, it has toured extensively across the UK and worked in forty countries internationally collaborating with some of today’s most inspiring artists on such works as Things I Know To Be True, Othello, Beautiful Burnout, Lovesong, Stockholm, and The Believers.

The 6-hour workshop will be led by Frantic practitioner Jess Williams, who has been with the company since 2012 and serves as associate movement director on the US tour of Curious Incident . It is designed to introduce Frantic Assembly’s unique approach to devising physical material, aiming to “liberate potential, and build confidence in performers”.

The workshop will range from beginning to intermediate work, giving a sense of what it is like to be an actor in a rehearsal room. Attendees will work collaboratively to create new devised material including Group Elevation and Chair Duets and learn practical, production specific exercises from shows like the Curious Incident, Lovesong, and Beautiful Burnout

NYC workshops are pretty much sold out, but there are still a couple places available for the Philadelphia workshop. To register go to actorsmovementstudio.com or email actorschekhovstudio@gmail.com