On September 6 and 7, Keila Cordova Dances will present As Pretty Does at Temple’s Conwell Dance Theater, a journey of provoking movement and humor that asks, “What is it to be human?”  Between rehearsals, Cordova spoke to Kat Richter of The Dance Journal about the meeting of micro-storytelling and pure dance. 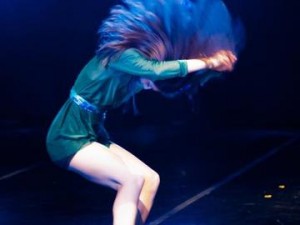 Kat Richter: As Pretty Does takes its inspiration from “lost histories.” What does this mean to you?
Keila Cordova: Right now I’m fascinated by the smaller stories in history that are about ordinary people. Traditionally history is the sum of stories told about the leaders of the world, or the battles. That’s what gets written down.  The lives of ordinary people don’t usually get recorded.  They’re lost. So I’m playing with a few of those stories that have captured my imagination. And they exist for us to know because of their own uniqueness. And they’re like fossils, in that they tell us so much about the life of those times and about the people themselves.

KR: How many dancers will the performance feature?
KC: The performance is featuring 5 performers, 4 dancers and 1 singer who will also dance. They are Kathy Kerner, Karmen Nicole, Matt Austin, Loren McFalls and Salina Faison. They’re all so wonderfully talented and smart. It’s been an honor working with each and every one of them.

KR: How would you describe your style of dance to someone who has never been to a dance concert before?
KC: First I would automatically use a vague term, like “post-modern.”  Hah! Then I would say that my style of dance is where music and my spirit meet in conversation with time and space. In so many ways, dance is such an experiential thing that I would ask them to just come see my work and make up their own mind.

KR: How does this work differ from previous performances you have produced?
KC: I’m more interested in coming into rehearsal with questions rather than answers. I would say that this work is theatrically looser and more dance-centered than other recent evening length works. I passed this question on to the composer, Cory Neale, since we recently discussed this topic. He said he found that the new work shows a shift toward non-linear vignettes told with nuance; and with an eclectic cast.

KR: What can audiences expect from As Pretty Does?
KC: The show runs almost an hour. Conwell Dance Theater is on the 5th Floor of the building but there are great elevators and we’ll have signs posted along the way!  The seats are pretty comfy.  I love the coziness of Conwell Dance Theater, how it simultaneously balances being a great dance place but also a comfortable context for theatricality. I’d say come, put your seat belt on and be open to enjoying the ride.

KR: What sort of music and costumes will the performance feature?
KC: Musically, I’m once again collaborating with the very talented Cory Neale. Singer/actor, Salina Faison will be sharing her gifts with us.  We’re blessed to have the very smart Christine Causer as our lighting designer. This will be my first collaboration with costume designer, Amanda Wolff, who was the 2011 Dancing with the Stars Costume Contest winner.

KR: What has been the most challenging thing about producing a show for Fringe?
KC: Fringe is always a balance of many hats, and things always happen. This year, we lost one of our talented dancers (Chrysta Brown) to injuries not related to the work. Dancers probably get injured more often by mundane things like tripping when crossing the street than they do from dancing!  Doctors told her she can’t dance for at least 4 to 6 weeks, so we want her to do everything in her power to make a full recovery.

KR: What are you hoping to accomplish through this performance?
KC: I hope to end each show by having conversations with audience members who want to talk about what they experienced in the show and if and when they connected to the work.  That’s always a real gift. I hope to create a space where people come out a little more curious about people and the world around them and a little more willing to just start dancing at any given moment when music or the inclination moved them without worrying about what someone will think.