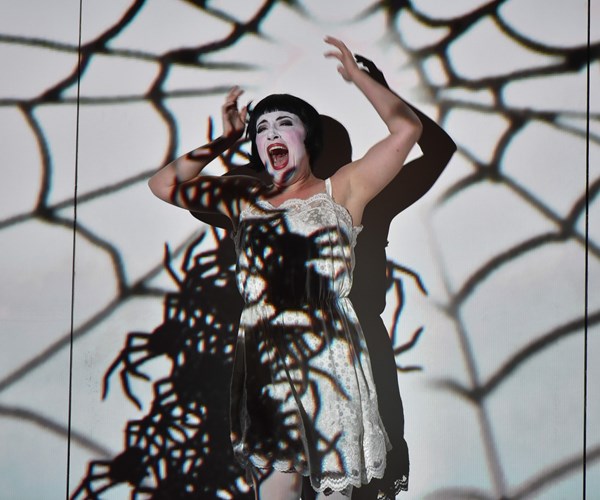 As the most popular of Mozart’s operas, THE MAGIC FLUTE has seen many permutations, each director adding something different. In Opera Philadelphia’s O17 festival production, on tour from UK theater company 1927, the uniqueness lies largely in what was taken away: the no small devices of dialogue and a physical set.

Instead, a giant white wall spanned the stage, serving as backdrop for stunning projections of the different realms traversed throughout the opera. Inspired by the silent films of the 1920’s, dialogue was projected as title cards in lieu of speaking roles. The singers reflected the stars of the day with Pamina (Rachel Sterrenberg) styled as Louise Brooks, Papageno (Jarrett Ott) as Buster Keaton, and Tamino (Ben Bliss) close to a George Valentin type. Cutouts at strategically placed locations on the wall allowed the singers to appear on stage, 20ft above the ground, while animations moved all about them, coordinated with perfectly timed gestures from the singers.

Some characters were animated too. In the Queen of the Night’s case, singer Olga Pudova’s body was covered in a white cloth while projections of huge spindly and deadly legs twitched were cast over the whole screen. Combined with the soaring notes from Pudova, the scene was transfixing.

Constructing a new world on top of a beloved story is exceedingly difficult, as twists can easily be taken as cheap tricks. This eccentric world however, was compelling enough to induct both new viewers and veterans of THE MAGIC FLUTE. With the dialogue removed, the intensity of the arias was concentrated, which allowed focus on the music in a different and strangely haunting way. Though the aesthetic of the projected world did jump around stylistically, overall it fit with the playful tone.

The animations allowed for all the rules to be thrown out. When Pamina is about to commit suicide, but is stopped by the three spirits (A.J. Owens, Damian Ferraro, and Patrick Corcoran), a moment traditionally full of profound tension, this production pulls off a joke met with a hearty laugh. There were some limitations to foregoing dialogue, as the tension that builds with dramatic pauses between words wasn’t as present. Regardless, this production was a fascinating lens to look through, and a worthy anchor of Opera Philadelphia’s inaugural O17 Festival.