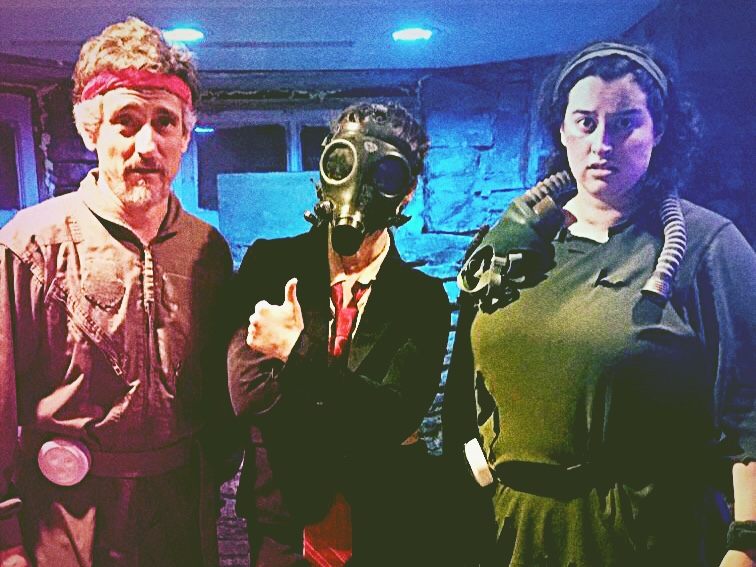 Let the fun begin! After being lightly checked out for security purposes, lucky game show audience members are ushered into the elusive Bunker at the Panorama, and given seat assignations in either the Black Heart, Brown Bear or Grey Cloud sections.  MC and game show host, the dynamic Anna Bennett, introduces post apocalyptic game contestants Beth Geatches and Chris Leone, who will match wits and alternative media facts in a fight to survive, and get some swank survival gear. Glorious, sometimes ominous and darkly humorous original music performed by Nick Stamatakis keeps up an emotional tally, while the contestants battle it out during ‘Triage Trivia’, a survivor sing-off, an apocalypse apparel tournament where select patrons model makeshift outfits, and play off in ‘The Price Is, Whatever It Is’.

A variety of games include spectator participation, and cues for improvisational purposes are culled from the crowd. Someone may be asked to pick a card from a deck that is inevitably stacked against the odds for survival, quizzed for what they’d miss most if the world came to an end, or called upon to recite letters from a perfectly harmless tossed hand-grenade. All answers are implicated in starting the next challenge.  Interspersed between bouts, in a cleverly staged split screen effect, players steps into a huge blue hued television frame to give antic, sporadically poignant, true personal testimony, in addition to reenacting a video of the moment they knew that all was lost.

While Beth and Chris duke it out among the ruins, a budding romance appears to be blossoming.  In this scorched, desolate atmosphere of annihilation, could amity yet exist? Really? Stay tuned, because each version of the show ends differently depending on how the game goes.  One thing is for sure, in this absurdly entertaining reality show within a show, Bent Antennae gives a veritable skewed view that inflames the brain even as laughter reigns.