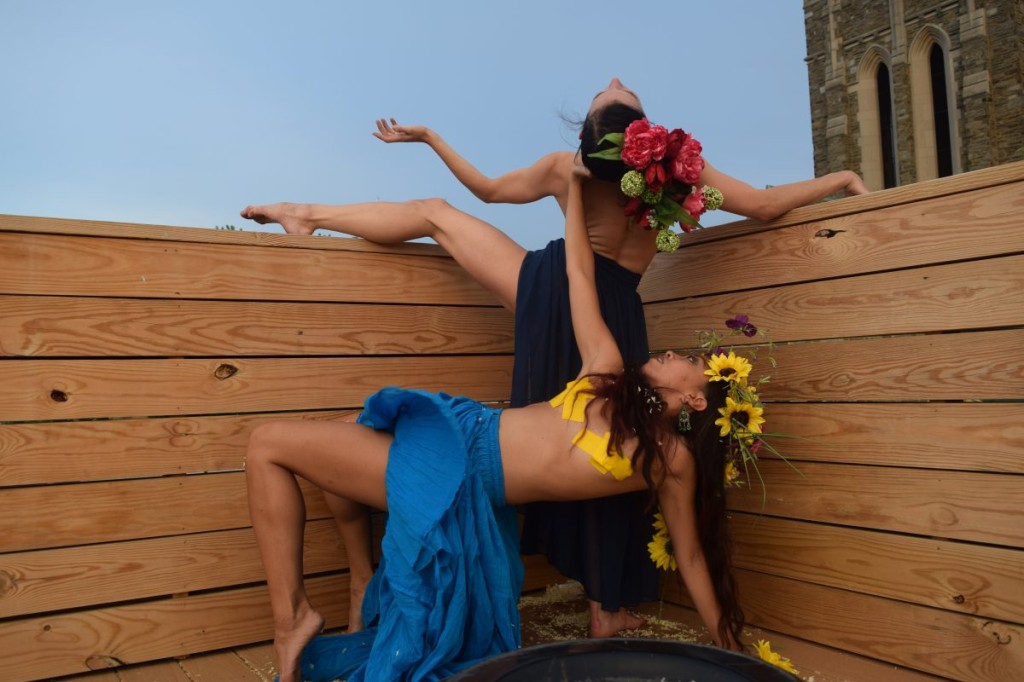 Evalina’s “Milk” examines “give and take” in motherhood. Unlike what may be imagined by the word “milk”, her choreography is intense and almost ferocious. The female dancers slap their body, stomp their feet vigorously and bang their back of their upper body on the floor. Their movements and breathing are relentless and demanding yet fluent and natural. A female dancer with a soon-to-be-born life inside her belly appears at the back of the stage and slowly comes close to the viewers while posing gracefully. The quintessential nature of womanhood that she symbolizes and the resilience, energy, and strength that other dancers visualize are both fundamental characteristics of women.

Annielille Gavino showcases a story of herself and women through “HERstory”. In a projected movie, Ani in a traditional gold Filipino costume holds a candle and move her arms slowly at a tranquil river bank. Dancers on the stage take over the scene and dance to celebrate the mother nature and matriarchal powers. The peace is broken when colonization takes over. A movie of a bride (Anni) in a white dress dancing in a church is projected. She walks to the altar but suddenly spins and reaches out her hand as if she yearns to escape. On the stage, the female dancers are treated as objects of a man. Anni’s daughter in a simple white dress is easily caught and carried away by a man, then Anni in a similar white dress is dominated by the power and violence of a man on the stage. The dance ends as her daughter in the same gold Filipino dress offers a candle at the river just like her mother did. The piece confronts the social stigma towards vulnerable women and children, which is painful to face but should never be avoided. It is a powerful statement to the modern society in the most direct and expressive form of art.