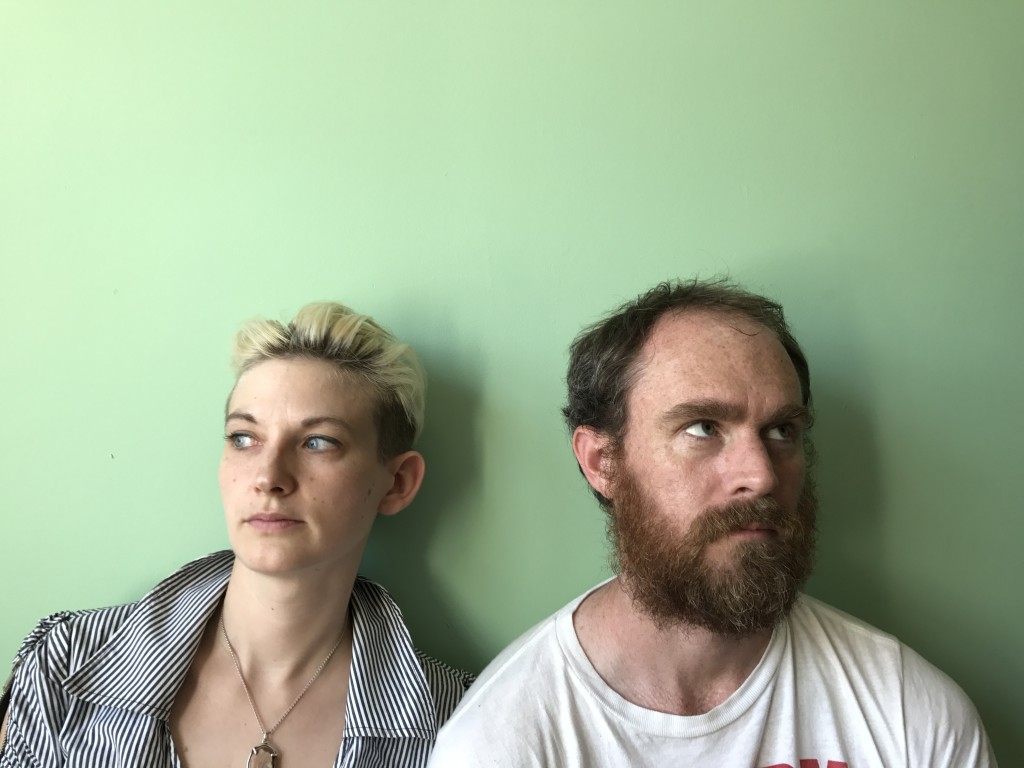 A friend “knows who you are and forgives you for it.” Playwright/actors Mary Tuomanen and Chris Davis grew up “side-by-side.” ALCHEMIST revisits selected memories of their long friendship. Not at all like realistic ‘kitchen sink’ theater, the informal but choreographed action includes talk, reading, music, and more-or-less dance numbers. Well, let’s say she’s a dancer. There’s a lot of tongue-in-cheek: He says he has stoner friends, while hers are smart and pretentious. The show takes place in One Shot Coffee’s cramped second floor library space where audience members are huddled literally two feet from the actors. I idly wonder if doing the piece in a large performance space might open up buried, more metaphoric aspects of this life-into-theater work.

Of sustaining interest is their three-year correspondence when they were in their twenties. He lived in Mexico while she was in France. That, in itself, is interesting. While their lively letters don’t often go into depth, they keep the two connected. She discloses that in Paris “looking cool is an action. Otherwise you’d have a panic attack.” When she’s down he writes from Mexico, “Come on, Mary. We’re considered talented by some people.” These two very creative theater artists with writing, acting, directing, and producing cred are again making their mark. Both are brilliant. She’s a sharp cookie for whom smart ideas seem to come easily, whereas he seems to muddle into his laid back, humor-laced brilliance. They’ve turned a version of reality into theater, showing friendship’s accumulation of connection and trust, warts and all—tough, bumpy parts and gaps. We’re invited to get inside the relationship, to see how, through staying in touch, not too heavy and not always available, but steadily there in the background,  they’ve offered each other clumsy encouragement when it may not have been coming from anyplace else.

It must have been a complicated process to set up this construct. What method to choose to recall personal bonding experiences and find a shape for their presentation? In a series of “remember whens” they uncover the good stuff that connected them– long drives, letters, old Gmail, and some skypes (where they had to yell everything to be heard). It’s one thing to safely disclose vulnerabilities within the core of a tight friendship. The trick comes in determining together how much soul bearing in rooms of strangers. How far to push their comfort zones to serve truth and theater? Disclosure is very theatrical, especially when perceived vulnerability is in fact real vulnerability. In ALCHEMIST Davis and Tuomanen have sent tentative depth charges to evidence how they formed the friendship-cement that has helped them transmute their rough hesitance and doubts into something creative, more mature, and strong. The play, like a relationship, feels like a work in progress as they gradually come to the realization that each has been an alchemist in the other’s life. Many in the closely gathered audience probably thought of their own long-time sustaining friendships that are gifts in our lives. I know I did.